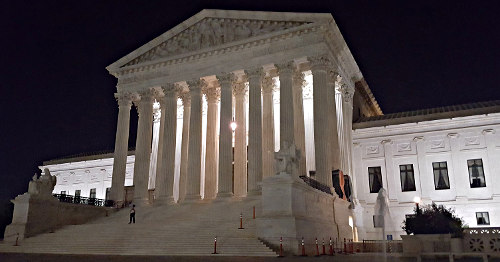 Dancing statues. A blood stain that cannot be removed. A demon cat. And tragedies galore. It's all part of the history of our nation's capital in Washington D.C.

I found Washington, D.C. to be a fascinating place. It's steeped in history, and it's a hotbed of political demonstrations and controversies.

However, I was surprised to learn that D.C. has a darker side. Among the monuments and government buildings, there are sightings of ghosts and unexplainable creatures. And the city's sordid history lends support to the theory that D.C. is one of the most haunted places in the country.

I recently had the opportunity to take a tour of the haunted side of Capitol Hill. The tour was led by a guide in a red Victorian dress, who guided my group by lantern light and brought the stories to life through dramatic retelling.

My tour started with the Folger Shakespeare Library. Learning about this building was a treat in and of itself. I've been to D.C. several times as a child, but for some reason never knew it existed, let alone that it houses the largest Shakespeare collection in the world.
In this building, I learned the security guards frequently find the lights on in the Reading Room. They turn the lights off, then continue on their rounds "“ but when they return, the lights are on again.

The common theory is that it's the founder, Henry Clay Folger, who turns the lights on. Folger had amassed the collection of manuscripts during his lifetime, but passed away before the construction of the library was completed.

I imagine he doesn't mean any harm "“ he's just enjoying his collection.

This building was perfectly spooky at night. As I approached it, the gray columns looked somber against the backdrop of an inky sky, highlighted by clouds and moonlight.

I got the impression that the ghosts here are on the friendlier side "“ even helpful at times. As I admired the old-fashioned street lamps and towering arched doorways, my guide told a popular story about two painters who had a supernatural experience here.

These painters were working in the building and needed to get a cart past two very heavy exhibit cases. There wasn't enough room, but suddenly, one of cases moved on its own by about a foot, allowing them to get the cart through.

Another common sighting is a police officer who helps people find their way out if they become lost in the endless stacks of books. After helping them, he tells them he was killed several years ago, and then he disappears.

As creepy as this would be, I'm sure I'd appreciate the help if I ever got lost in the library.

Looking at the sparkling white pillars and sculptures that adorn this building, and the cheerful fountains that decorate the walkway, I had a hard time imagining the sordid history that happened at this site.

I learned there was originally another building here, the Old Brick Capitol. It was used as a prison for Confederate soldiers, burnt down, and later rebuilt on the same site, before eventually becoming home to the nation's highest court.

My tour guide explained that the sounds of banging against metal bars (incidentally, there are no longer any metal bars on the premises), pleading, and hysterical crying are often heard. These are believed to be the sounds of former prisoners.

The most controversial and well-known prisoner was probably Mary Surratt. She had been the proprietor of a boarding house where John Wilkes Booth and other conspirators stayed while they plotted the execution of Abraham Lincoln. Mary was accused of being part of the conspiracy, and was briefly imprisoned at the Old Brick Capitol before being moved to the Arsenal Penitentiary (now Fort McNair).

She was sent to the gallows, making her the first woman executed by the U.S. government. She proclaimed her innocence until her death. Now people claim to hear her crying, or to see her at one of the windows on the anniversary of her death, holding onto the bars and sobbing. I learned there is a lot of controversy surrounding Mary's death sentence, and I have to admit there's a convincing case that she didn't commit all the crimes she was accused of. So I suppose it's understandable her spirit would hang around the building after such a traumatic experience, still pleading her innocence. 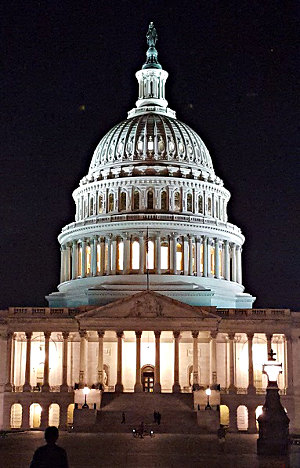 Concluding the tour was the Capitol. It was pretty dark outside by the time my group reached the building, and the golden light emanating from the dome was very striking at night.

However, despite its lovely appearance, the Capitol has a darker side. It might be the most haunted building in Washington, D.C.

How did the Capitol come to be the most haunted building? I'll give you two reasons.

The first is a legend that it's under a curse. In 1808, a construction assistant named John Lenthall was helping with the plans for the old Supreme Court Chamber, a structure with a large, domed ceiling. For reasons unknown (there is some debate as to whether it was a creative disagreement, or just poor judgment on the part of Mr. Lenthall), he started to remove the dome's supports, causing the whole structure to collapse on him. Then, with his final breath, he cursed the building that killed him.

The second reason is the sheer number of tragedies that occurred there. This began with its construction, under which the working conditions were deplorable and unsafe.

One worker who fell to his death is still seen there, reporting to work as usual. A murdered stone mason is also seen, looking for his revenge.

I enjoyed hearing the story of Pierre Charles L'Enfant "“ although I felt sorry for him. This man was contracted to design most of D.C., but his plans were never fully adopted. He never received payment for his work, and he was broke when he passed away. Now people claim to see him wandering around near the Capitol, a parchment in his arms and a confused look on his face. I imagine he's wondering when he is going to receive payment for his work.

At the Capitol, politicians have not been spared from tragedies. Of these, the most well-known story is probably that of John Quincy Adams, who suffered a stroke while delivering a speech on the former House floor (now the Statuary Hall) in 1848. He was carried to a couch in another room, and died two days later.

Interestingly, the spot where John Quincy Adams' desk was located, and where he suffered the stroke, is now marked by a plaque and known as the "whisper spot." By standing at this spot, a person can clearly hear anyone else who is talking in the hall "“ even if they are across the room and whispering.

Unfortunately I didn't get to try it, since I couldn't enter any of the buildings at night "“ so I'd recommend also scheduling a daytime Capitol tour.

And speaking of the Statuary Hall, the whisper spot is not the only funny thing that goes on there. I heard a legend that every New Year's Eve, the statues come to life and dance with each other. One security guard claims to have seen the statues of Robert E. Lee and Ulysses S. Grant shaking hands.

But back to the tragedies… There is a well-documented blood stain on a marble staircase near the House floor. This stain has never been removed, despite all efforts to clean it.

The blood is from politician Preston Taulbee, who was shot and killed by reporter Charles Kincaid after the two men got into an argument over the scandalous articles Kincaid had published about Taulbee.

In addition to the permanent blood stains, it's said that reporters often feel nervous near the staircase, and have even been tripped. This is thought to be the ghost of Mr. Taulbee, who holds a grudge against journalists.

And finally, the most infamous legend is the resident Demon Cat (or, D.C. for short). This story is a favorite for most people who go on the ghost tour "“ myself included! However, as much as I love cats, this is one cat I would not want to encounter.

Years ago, feral cats lived in and around the Capitol to help with rodent control. Eventually, all of the cats were adopted, died, or were turned out to fend for themselves. However, one cat remained.

Sightings of this creature happen at night, when lone security guards walk through on their rounds, in the basement of the building near the crypt. Feline footprints have also been spotted there.

The cat is black with yellow eyes. The story goes that it initially appears as a normal cat, but then grows and grows in size, menacing the guard and then suddenly disappearing. There is one account of a guard firing his gun at the creature.

Supposedly the Demon Cat appears just before a national tragedy or a change in administration.

My research revealed there are many different versions told of these stories. But I suppose that's true of any good ghost story. For me, the mystery doesn't take away from the fun.

For starters, there are less crowds in the late evening, and there's a serene stillness about the place. Even better, the buildings are beautiful at night "“ with golden lights that spill over and highlight the tall pillars and architectural details. In my opinion, it's one of the best times to see the city.

Tours run at 9pm nightly from March through mid-November, except for Easter and July 4th. Advanced registration and payment are required. It's an outdoor tour, so wear comfortable shoes and check the weather forecast before you go.

Tammy Powell is a veterinarian and freelance writer based in Boulder,
Colorado. She is enthusiastic about traveling, reading, meditating, and
ballroom dancing. She maintains a blog of her travels and life lessons at:
www.mapsandmeditations.com

Some of Best Photos from El Salvador

The Heaven of Lamu, Kenya