Gobekli Tepe is an unprepossessing archaeological site in Northern Mesopotamia "“ the area between the Euphrates and Tigris rivers. No postcards of the site are on sale and no guidebooks. Indeed, the gatekeeper has only one book for sale and that's an English translation of the work by Klaus Schmidt that first alerted the world to his significant discovery in southern Turkey near the Syrian border.

The archaeologists believe that Gobekli Tepe was built by hunter-gatherers somewhere in the period 7500BC – 9500BC, which means this site is at least 5,000 years older than Stonehenge and The Pyramids at Giza in Egypt. Gobekli Tepe was built just after the last Ice Age and yet people in those times weren't supposed to build things, to carve stone, and to raise monoliths in the name of religion. Prior to the discovery of Gobekli Tepe it was thought that these hunter-gatherers just hunted, gathered, and then moved on in their nomadic existence. Those thoughts have to be rethought as these particular hunter-gatherers obviously had advanced building and artistic skills and a desire for something to worship. Their society had an artisan class, a priest class, and so was almost certainly hierarchical.

Visitors to the site walk on gangways above the four enclosures that have been unearthed. Each enclosure contains numerous monoliths that are surrounded by 2-3 metre high stone walls. Enclosure A was discovered in 1995 and excavated between 1996 and 1997. The main features of this enclosure are the T-shaped megaliths. On the two central pillars there's a depiction of a net made of snakes above a ram and a vertical row of a bull, fox, and crane. Enclosure B was excavated between 1998 and 2002 and contains two pillars that are 4 metres high and show reliefs of foxes. The floor is made from a substance similar to concrete, which is waterproof. Enclosure C was discovered in 1998 and contains two concentric circles of pillars. Enclosure D, discovered in 2001, contains two central pillars 5.5 metres high. Another pillar contains an image of a headless man with an erect phallus. Another pillar in this enclosure possesses a similar image. Both of these men are wearing a belt with a loincloth. Other carvings in this well-preserved enclosure depict boars, bulls, gazelles, foxes, spiders, scorpions, and snakes.

Currently only about 5 – 10% of the whole site has been opened to the elements "“ the remainder lies under the dirt, soil, and detritus that the centuries piled on top of Gobekli Tepe after it was abandoned by its creators. However, the archaeologists do believe that when the site was abandoned Gobekli Tepe was covered by the ancients with 500 cubic metres of earth which created an artificial mound that remained hidden for around 9,000 years.

Standing at the entrance to the walkway over the four excavated enclosures it's difficult to comprehend that 11,000 years ago hunter-gatherers were creating a religious site at all let alone one that will be an acre in size by the time the whole site is excavated. Looking at the carved monoliths the visitor has to comprehend that these stones weren't dragged here from a local quarry and roughly erected. They were shaped expertly and some had their surfaces carved with a lot of skill. There didn't appear to be any mistakes, there were no half-carved animals or rough attempts that had been discontinued "“ everything was complete and looked as though it was meant to be. Where did the carvers and shapers practice their skills "“ what remains to be discovered? Were there journeymen craftsmen who travelled around the ancient world and created these sites for the people of the time in a similar way to the tradesman of the Middle Ages who carved their insignia into the cathedrals of Lincoln and Trondheim?

One of the 5.5 metre high monoliths rests on a square, stone base. On one edge of this base are carved seven wading birds standing proud from the rest of the stone. These birds are evenly spaced and from a distance look remarkably similar. Their beaks are well defined and their bodies appear curved and smooth "“ such carving is quite remarkable given that, according to our current timelines, the birds would have been carved with stone tools not metal ones. At some point the stone base has been damaged meaning that two of the birds have lost their heads but their bodies are preserved. The bodies of all seven birds exhibited no discernible chipping marks that you might expect with a stone implement and indeed it looked to me as though the carvings had been sanded as they seemed so smooth. The only other side of the square base that I saw didn't contain any carvings, so why was so much lavish ornamentation confined to one side of the base?

The Abbey of Mont St Michel 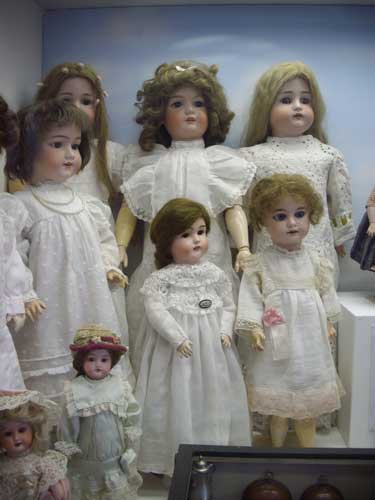 The Toy Museum in Munich

From Ukraine to the “Kind of Still Soviet” Transnistria