I’m at present traveling in Turkey, a country which all by itself has a lot of attractions. However, an added bonus is the proximity of many Greek Islands which can be easily reached by ferry. One of them, which I decided to visit yesterday, is Samos, home to Pythagoras, Aesop and Epicur. A ferry leaves the port town of Kusadasi on a daily basis at 9.00 am and the crossing only takes 1 1/2 hours. Return trip is at 5.00PM which leaves about six hours to get a glimpse and taste of a different world, steeped in history. 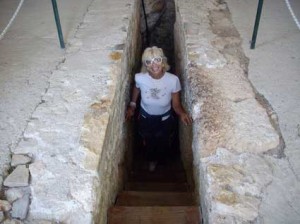 My first stop was a place which is considered one of the eight wonders of the ancient world, the Eupalinos Tunnel. Located on the mountain slopes of Panagia Spilani on the south/east coast of the island, it’s easiest reached by taxi from Samos/Vathy, the capital where the ferry docks. The tunnel, named after its architect, the Greek engineer Eupalinos, was carved out of the rock under the reign of Polycrates in the 6th century BC, when Samos reached its greatest prosperity. To view this fabulous structure, which forms the middle part of a huge aqueduct, you literally have to go underground. Workers worked in shifts for 10 years to complete the water tunnel. It’s only 1.80 meters high and 1.80 m wide and the current lengths is 1350 meters, about half of which can be visited today.

After paying your admission of 3â‚¬, visiotrs enter a small structure where you see nothing more than a very narrow entrance and wooden staircase which immediately leads into the dark ground. Taking a deep breath and steeling yourself, you descend into an incredible adventure. At the bottom of the wooden steps, the tunnel starts and after a few meters, widens, but not by much. It’s well lit though and allows the visitor to marvel at the capability and accuracy of ancient stone workers, who carved this tunnel out of the rock and laid ceramic pipes through which the water flowed.

I couldn’t help but thinking what a fantastic backdrop for any thriller movie this setting would make. No visitor to Samos, even if they only have a few hours, should miss a visit to this site. I will certainly come back to Samos with more time to spend.