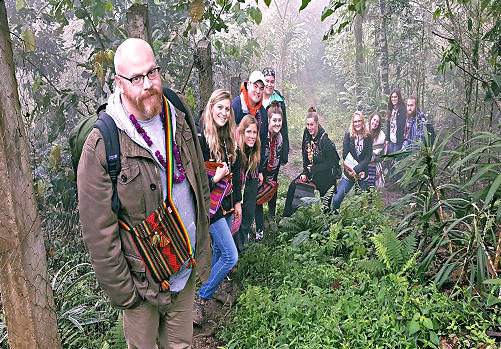 It’s just before 8 p.m. when HÃ©ctor abruptly veers his white van onto the dusty shoulder. Hermanos SerdÃ¡n International "” our dimly lit destination "” haunts us from across the interstate. This is so close that my accomplice could probably reach beyond his side mirror to tap the glass facade for which we set out forty minutes ago. I squint at the rearview. The glowing illumination of Puebla has faded away. Moreover, I do not detect the cherries and berries of a cop car, ambulance, or firetruck. Observing only obscurity, I have no idea why we have pulled up lame barely short of the finish line. My concern has a rapid growth spurt.

Noticing that my brows are about to spring off my forehead, he further explains that the airport police will make us move if we hang at the hangar longer than it takes to shift into park. Our soon-to-be passengers must be observed wheeling their luggage towards our back doors for us to remain curbside.

“Â¿CuÃ¡ndo van a llegar?” HÃ©ctor inquires. (When are they going to arrive?)

I can’t ignore the clock on the center console. The digital numbers sluggishly advance on that dark, lonely highway in central Mexico. And I can’t shake the shakes in the passenger seat. Perhaps the chills I feel are due to the fifty-degree temps fogging up the windshield. Or the quivers could very well be the nerves I always get prior to receiving volunteers. I am on the verge of meeting a group of eleven from Carroll University after all. The wait is wearing on me. I wriggle. I lean forward. I slouch. I simply can’t find a comfortable way to sit. Nor can I decide if my watch should go on my right or left wrist. At last a cluster of lights emerges in the sky. I watch it slowly descend behind the terminal.

“Por fin han llegado,” I sigh. (They have finally arrived.)

Our shoulders slump simultaneously. Our concurrent, conquered chuckles accompany the air abandoning the auto. Little did I know, though, that the deplaning individuals we’d eventually pick up would lift me up for the next week and a half.

A four-hour ride with HÃ©ctor the following day took us from Puebla to Cuetzalan. The ten undergrads, their professor, and I hit the cobblestones running once we stepped off the van and into the green confines of Hotel Taselotzin. During the daze to come, we dug into our service project in the nearby village of Xiloxochico (She-low-show-cheek-oh). The task was to clear the righthand section of a two-room structure overlooking the playground of Bachillerato JosÃ© Vasconcelos"”the local high school. This simple-sounding endeavor, however, proved to be quite challenging.

With shovels, pickaxes, buckets, and wheelbarrows, our team labored alongside area students and parents to gradually remove a mound of dirt several feet high and wide from the future library. The soil primarily consisted of stubborn clay and rocks. The job site was sodden thanks to the relentless January rains. Those who participated in the bucket brigades above the miners were at risk of falling into the excavation area. The wheelbarrow path was narrow, slippery, and steep. Biting bugs constantly launched attacks from the overturned earth to boot, so workers were frequently swatting at the napes of their necks. In addition, those wearing short sleeves were continuously slapping their arms. I remained steadfast nonetheless, hurdling these obstacles to ultimately finish the dig. We even had enough remaining in the tank to transport blocks (for the walls one day) across the playground to the base of the hill upon which the impending book repository stood.

But the purpose in Xilo wasn’t solely to help build a library. Throughout the week, we used the undertaking as the means to form relationships with the locals and the students and staff of the high school. We spent a lot of time playing UNO, soccer, basketball, and guitar. The team broke bread, exchanged many laughs, and posed together for countless pictures. These occasions we shared with community members far outweighed the perpetual pails of mud we hauled. Therefore, the Carroll crew and I found it hard to bid farewell to our new friends, and, in particular, our motherly Nahua guide, Victoria Contreras Coyota.

Because DoÃ±a Viky had accompanied us for the entirety of our journey in Cuetzalan, not to mention her native Xiloxochico, she had trouble uttering adios too. I caught the sadness in her face while our squad had a Kodak moment with her in front of our ecolodge. Like most of us, her eyes welled up shortly after our final photo, and I tried to grasp how difficult it must have been for her to see us leave. DoÃ±a Viky treated us as an extension of her family. In fact, she was with us more than her actual family. Given that she prepared our breakfasts and dinners in Cuetzalan, she bunked at Hotel Taselotzin rather than make the tedious commute to Xilo every evening. It was only natural for her to become attached to the people she took under her wing. I begin to comprehend this connection two mornings later.

Unprepared for Departure from Mexico

It’s just before 8 a.m. when I abruptly leave my seat to hug the Carroll University group, who are in line to board their plane to the States. While I take in each of my teammates entering the jet bridge, I think back on the whirlwind adventure I have experienced. A somber smile appears on my face. Flashes of our trip suddenly flood my mind.

I recollect my fellow travelers’ falls in misty forests, out of vehicles, and on the soccer pitch. I remember them falling ill, being homesick, and at times noticeably down. Yet I also recall them getting down on the dance floor at Disco Toca Toca (Cuetzalan’s hotspot), then dirty on the job site. This reminds me of extremely sore muscles, which don’t get any better as we shiver during dinner at Hotel Taselotzin. I reflect upon our attempt to fight a chilly eve at the inn by entering the torrid Temazcal. In the sweat lodge I swelter a river and subsequently follow one to a beautiful waterfall, Cascada Las Brisas. Reminiscing on our hike to the lagoon conjures up our closing climb mere hours ago. Atop the roof of Hotel Colonial, I witness Puebla brilliantly irradiate the midnight sky. All these vivid images have made it tough for me to say goodbye.

My flight to Houston doesn’t depart for a while, but I can’t sit. Instead, I am pulled towards the windows looming over the tarmac. I can’t take my eyes off their plane. I watch it slowly ascend behind the clouds.

For more info on how to join an Xperitas Community Partnership Program visit their website here.

Shuttles to Cascada Las Brisas are located a block east of Cuetzalan’s main cathedral, San Francisco de AsÃ­s. The combis (7 MXN/person as of January 2020) regularly roll to the nearby town of San AndrÃ©s and drop visitors off at the trailhead for the waterfall. Although short (10-15 minutes), the trek is really steep at certain points. Guests must fork over ten pesos to a park employee to gain ultimate access to the lagoon.

To bookend the trip, the team stayed at Hotel Colonial de Puebla. Otherwise, we stayed at the Taselotzin Ecolodge in Cuetzalan.

Via Sprinter vans, Transportadora TurÃ­stica Jurfal took us to and from Cuetzalan as well as from and to the Puebla International Airport.

I flew from Minneapolis (MSP) to Houston (IAH) to Puebla (PBC), returning in reverse order, on United Airlines .

Tyrel Nelson has been leading volunteer trips since 2007. He enjoys traveling
the globe with his wife, Alyssa, playing guitar, hot yoga, cold-weather 5ks, and
slow-pitch softball. He teaches Spanish and continues to write in his native Minnesota.