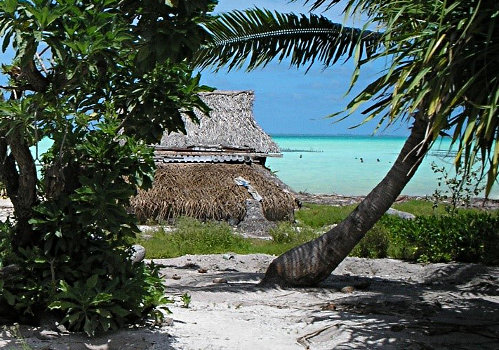 “Tying up to a pier and disembarking through the passenger gangway isn’t an option,” our Captain said.

Never did I imagine I would one day work onboard a cruise ship for almost seven months. Let alone sail away to an atoll that for me and for any other well-traveled person is virtually impossible to pinpoint on a map. That is because the atoll, a thin circular strip of sand inhabited by 2,000 souls, is only 33.7 kilometers. Officially known by the name of Tabuaeran and promoted by cruise ship companies as an island, Fanning doesn’t float alone. In fact, Fanning, a ring-shaped strip of sand lying 1,000 miles south of Hawaii and 500 miles north of Tahiti, is part of a network of islands that make up the Republic of Kiribati.

One Wednesday afternoon in September 2014, several cruisers and a handful of crewmembers huddled on a tender to get ashore. I was off duty that afternoon and joined the group on a walking tour of Fanning.

As the tender reached the island, enclosed by a dense wall of tall palm trees, the camera clicks and the gasps of wonder from all of us aboard had me thinking about the ego of the colour blue. Looking up, down, and around, I felt the tug of a chromatic competition between the electric blue of the water and the azure of the sky.

When the tender stopped, we came face to face with a bunch of brown-skinned youngsters in white t-shirts sitting on a wooden platform. Someone on our team said these kids knew of our arrival and gathered to welcome us.

“How are we supposed to greet them?” I asked. “Shake hands or just smile and say hi?” Heads turned, lips pouted, eyebrows raised. All I heard was hums and haws.

As soon as we set foot on the platform, a mellifluous chant reeled us in with claps and modulated choir-like voices. They showed us more than a typical island song; the sounds reflected the soulful vibration of the island, revealing to us that the ticking of the clock pulsated at a different pace in this part of the world. Before the chant came to an end, I managed to snap a photo of the singers.

The islanders’ tune dissolved into a single gentle voice. Seconds later that voice stopped, and we all applauded. As we moved further inland, our team leader gave us two options: stay with the team or break apart. It was the splendour around me that pushed me to go with the second option.

We all agreed to meet again on the wooden platform three hours later for our tender ride back to the ship. Three hours all to myself and a meeting point easy to trace back, I veered off on a solitary wander to experience what I had only seen on TV and once yearned while leafing through the pages of exotic travel magazines.

Roadless and void of urban planning and the technological perks found in any evolved destination, Fanning Island floats with pristine pride. So off I went into a long corridor with palm trees standing tall on both sides. Soon I found myself on the other side of the shoreline, and in front of me emerged the first sign of communal living.

It must have been my gaping mouth, my camera, or, unlike theirs, my shoe-clad feet that made islanders turn their heads and stare at me with a timid smile. I smiled back and kept walking.

A grave right by the entrance to a shack stopped me in my tracks. I leaned in to peer into a weathered engraving on a protruding block. I could not decipher the writing, so I contented myself with a photo. A man standing behind me with his hands clasped behind his back said it was his son. Where he came from, so surreptitiously, is something I wonder to this day.

“I’m sorry for your loss,” I hastened to say. The man did not bat an eye. Then I questioned myself, thinking whether that was the right thing to say. In fact, islanders buried their beloved ones somewhere as close to their homes as possible. He held the floor thereafter in an amicable way, which I felt would turn into an edifying conversation as we walked on.

Everybody went about their own business unfazed by the outside world and unafraid of privacy loss in what I called shacks or huts. The islanders called them their homes. These people’s spirit of unity reflected the open-air, carefree way of living in these modest dwellings without walls.

Sheltered under a thatched roof, two men stepped out to greet this man walking by my side who had earlier introduced to me as Buru in a heavily accented English. The conversation between him and his neighbours escaped me. What I regarded as a dialect was an oceanic language called Gilbertese, and his immediate linguistic correction felt as awkward as my next question about the wall-less houses.

“What happens when it rains?” I asked.

Rain and wind, rain and gale, or any other wet combination was what I meant to ask as I thought of the bare furniture at the mercy of weather changes. I did not want to offend him, so I chose not to verbalise my curiosity and gave a tight-lipped smile instead.

I passed a few other huts, then turned to the right. Ahead sat a rusty small truck with a canopy made of palm tree leaves.

“Is that yours?” I asked. He grinned and nodded as we walked up to it.

“How did this thing make it onto the island?”

“A cargo ship comes every three months. This is the first and only four-wheeled vehicle on the island.”

The glow of pride on his face paved the way for further questioning.

“So how about food and supplies? Do they come on the ship, too?”

“Yes. We have one shop. Would you like to see it? I can take you there and then drive you around for ten dollars.”

I accepted right away.

I sat on a wooden bench in the back, and the truck began to trundle along clunkily. We drove by mazes of palm trees and over a few bumps. On the way to the shop, little kids waved to us, and I waved back. I took a photo of them as we turned left and on to more bumps.

As the truck came to a stop, I jumped out. Right in front of us was the convenience shop: the place to see and to be seen. A venue for socialisation, Buru said. And two patrons turned and raised a friendly hand at me as they chatted up the person behind the counter. Unfortunately, I was not allowed to bring food onto the ship; otherwise, I would have bought a local product from the shop.

I looked at my watch: one hour left before I had to head back to the platform.

“Is there any type of restaurant on the island?” I asked, wanting to treat him to a meal.

Buru shook his head, his eyebrows knitting together.
“And the bikes, do they come on the ship as well?”

“Yes. We keep getting more on every shipment. Now let me take you to another place.”

And off we drove.
The island’s first brick building was still under construction. Until now, Buru said, a nurse came on the cargo ship every three months to check on women, children, and the sick. Pregnant women had to leave for another bigger, better-equipped island on their sixth month of pregnancy and returned only after having given birth on the next available inbound ship. Off-limits to visitors at the time of my visit, we drove past this hospital on our way to the beach. By now, I did not know what part of the island I was on.

On the beach, I bumped into one of my colleagues who was picking up shells and pebbles as souvenirs. I left my camera on the passenger seat, slipped off my shoes, and treaded into the water while Buru leaned against his truck, and waited.

As the truck pulled up by the platform three minutes later, some of my people were being photographed with three women dressed in native clothes.

“The woman in the middle is my wife,” Buru told us.

Like the rest, I, too, wanted a photo with them. I shook hands with Buru and thanked him for his time.

What Buru did not mention was the price tag for the photo. I only wised up when I saw the person being photographed after me handing a ten-dollar banknote to the woman in the middle.

I was just about to open my wallet when someone started talking to me. In the rush of the moment, another person tapped me on the shoulder; our team leader was calling our names. It was time to board the tender.

As the tender ferried us off back to reality, Fanning’s circumference began to shrink away. Floating alone amid wave-less blueness, the circle of sand in the distance felt like a golden ring I was forced to part with. My mistake was to look up at the sky and blink twice; the ring was gone when I looked back down.

Five years have passed, but that afternoon still comes to mind once in a while. Fanning Island is the only ring in the ocean that has not sunk.

Mauro is a certified teacher, licensed translator, former cruise ship crew member, and flight attendant. After obtaining his bachelor’s degree and a decade’s teaching experience, he moved to Spain to work in hospitality. Further education includes a degree in creative writing, and this year he’ll graduate with a masters in travel & nature writing from Bath Spa University (United Kingdom).