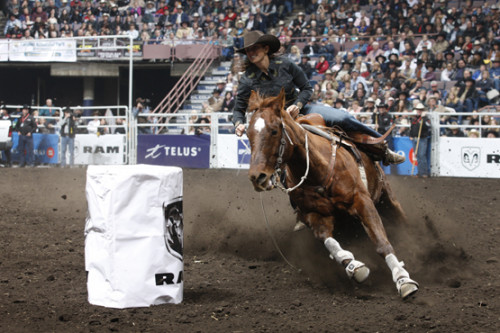 Cowboys and Aliens
Dust covered chaps and boots, and thousands of fans cheering as the gate of the chute opens… these are the sights and sounds of the Canadian Finals Rodeo. From its humble beginnings as a Hudson's Bay trading outpost, Edmonton has flourished into a thriving city, thanks in part to its agricultural roots. The fertile and productive soil of central and northern Alberta allowed farmers to both grow crops and raise livestock.

In 1879, local volunteers recognized agriculture was an industry that thrived on the sharing of information, and they formed an agricultural society"”Northlands"”to bring farmers, ranchers and agriculturalists together at what would become an annual summer farm fair.

Northlands added a fall event in 1974 to complement their summer exhibition. Farmfair International showcased prized livestock and agricultural products. The same year that Northlands launched Farmfair International they also secured the rights to the Canadian Finals Rodeo. For fans, this national championship is the Super Bowl of the Canadian rodeo circuit. Celebrating its 40th year in Edmonton competitors vie for some of Canada's top prizes in rodeo. This year's purse totals $1.47 million.

During this wild-west week, the City of Edmonton hosts River City Roundup, the companion festival to the CFR. From a chili cook-off to mechanical bull riding in Churchill Square, Edmontonians proudly show off their western spirit.

If you spot an alien among the cowboys, don't worry; Edmonton is also home to the Pure Speculation Festival in November. The city's fan community could cross paths with their idols on the street as easily as at a convention. Andrew Foley, one of the writers of Cowboys and Aliens, the comic that was adapted into a Hollywood movie, makes his home here. So does Mark Meer, the voice of Commander Shepard in Bioware's hit video game Mass Effect.

Pure Speculation Festival debuted in 2005. Fans of speculative fiction and fantasy pop culture rubbed elbows with festival guests throughout a weekend full of panel discussions on topics ranging from comics to books to video games.

This year, the festival goes 20,000 Leagues Under the Spec with a Steampunk theme, capitalizing on the growing popularity of Victorian era science fiction. Authors Gail Carringer and Arthur Slade will share the behind-the-scenes stories of their successful steampunk novels while other creators talk about the creative and business side of pop culture at the festival's varied panels. Of course, no fan convention would be complete without costumes and this year's steampunk theme is sure to wow anyone who attends the festival's Masqued Ball.

For organizer Diane Walton, one of the highlights of the festival is its intimate nature, allowing guests to reveal as much about themselves as they do about their work.

When it comes to Pure Spec, anything is possible.

From Jarira to Hendrix in Morocco