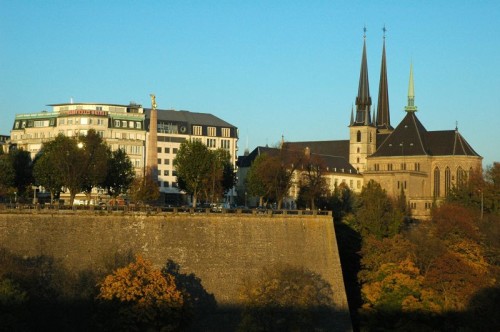 Commonly overlooked as nothing more than a business destination, my two year old daughter Electra will now attest that Luxembourg City is a surprisingly perfect place to take young children. The two of us travelled there together and found a small scale, accessible, safe and friendly UNESCO world heritage site which packs in multiple kid-friendly attractions.

There are plenty of appealing discoveries, but one of the best is MUDAM (MusÃ©e d'Art Moderne Grand-Duc Jean). Exceptional architecturally, it was designed by I.M. Pei and opened in 2006. There are creatively presented exhibitions, a lovely cafe, and, most importantly, plenty of running space both inside and outside the building. The new museum has also been ingeniously attached to Fort ThÃ¼ngen, three ancient stone towers which bear witness to Luxembourg's days as a fortified town.

MUDAM is a short walk from modernist city highlights including the golden European Court of Justice and the Philharmonic Hall. The whole area is the perfect exposure to Luxembourg's striking blend of quaint and cutting edge before you head to the historic district.

The MusÃ©e d'Histoire de la Ville de Luxembourg is right in the Old Town. It sounded rather dry until we went in and found a spectacular six storey treasure trove of historical artefacts telling the story of the city's history. It includes such toddler hits as models of ancient dwellings and a glass panoramic elevator, which I was forced to take at least twenty times. From there it is no distance to the city's top landmark, Cathedrale Notre Dame. Normally a beautiful and peaceful spot, a combination of echoing acoustics and my daughter's singing ensured that our visit was regrettably brief.

There's no need to take the obvious route to the Old Town every time, though. We headed a few bus stops out to LuxExpo, an enormous modern facility which hosts regular festivals and events. We had the good luck to stumble across a vast food and wine fair, showcasing incredible grape varieties, cheeses and meats that are not exported outside Luxembourg and its immediate neighbours. Electra was spoiled by all the stallholders and ended up dancing on a stage promoting flavoured milk to wild applause.

LuxExpo is in Kirchberg, which also has several gleaming shopping centres stocking all the emergency essentials you might need for pre-schoolers. This is particularly useful as finding a supermarket right in the centre can be a struggle: we used the central branch of Alima which is tucked away at 11 rue du Fort Bourbon.

Apparently Luxembourg has more Michelin star restaurants per square mile than any other country on the planet, but you won't be enjoying them with a two year old. Maybe Not Bob's has American diner-style food including a good Sunday brunch, and if all else fails, the square forming the heart of the city, Place d'Armes, has a spacious McDonalds on the corner.

We discovered that Sofitel Luxembourg Europe has a large atrium space for toddlers to run riot in while parents eat and drink. Le GlaÃ§on Rouge offers a tasty bar menu, and if your child permits you to hazard a proper meal, Le Stubli is an ersatz German chalet serving regional cuisine.

Luxembourg Old Town is stunningly beautiful, perfect for walking, and dotted with gorgeous parks to take a break in. We particularly enjoyed the landscaped gardens around the Villa Vauban. It's an easy and beguiling city to begin to know, but there will always be plenty more to discover.

Emma French is a London-based writer and editor who was born into the Diplomatic Service in Puerto Rico. She has been travelling ever since, often with her young family. Her book, Selling Shakespeare to Hollywood, is out now. She has lived in San Juan, Washington, Muscat and Milan. She writes for a number of travel publications including The Travel Belles, Travel Culture Magazine and the Bangladesh Web Guide. She has a regular guest blog at The Adventure Travel Shop and also blogs at www.phileasfrench.com. You can follow her on twitter @PhileasFrench and friend Phileas French on Facebook.