Some of the most enjoyable memories on my year long journey through South America happened while sitting, reading, gazing, listening, talking, zoning out or all of the above in a town's plaza. Whether it was the fullness of trees and detailed flower structures sprouting around, artisans hanging out and conversing among themselves, actors performing skits to an encircling crowd of pedestrians, or permanent chess boards battled on by the locals, these areas consistently felt like the heartbeat of the community.

My sessions involved complete relaxation and losing the sense of time. Although I never was able to gather the nerve to enter into a chess battle, I definitely logged in my plaza hours. Halfway through my travels I realized that I was unconsciously choosing to feel out a new location by plunking myself down in a town square for a day. With this amount of opportunity, the experiences ensued.

In Popayan, Colombia the central plaza proved to be the friendliest that I had the chance to encounter. I read the same book on four consecutive days and never turned past page 40. Each day I stared around 10 minutes into my novel before a friendly stroller would sit down and strike up a conversation. The most intriguing of these exchanges happened with two middle-aged ladies appearing to be in their late forties. They both seemed to derive so much pleasure out of speaking to an American, getting my views on their town, and simply chatting about some trivialities of the beautifully relaxed lifestyle. Then they began to make jokes about the fact that I did not have a Colombian girlfriend, with which they followed by asking me how to say "hijo de puta" in English (which is "son of a bitch"). Did I hear them right? Yes. After the ladies heard my answer, the conversation was lucky to get two sentences of normalcy without one of them saying the newly learned phrase, followed by an immediate burst of cackling. I couldn't believe my ears and eyes as I savored every second. In case you were wondering, they tragically did not introduce me to one of their daughters. 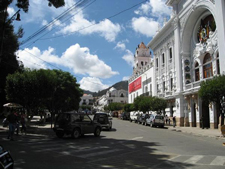 Plaza 25 de Mayo in Sucre, Bolivia is perhaps the most beautifully designed plaza I saw in South America "“ eloquent landscaping lined with palm trees and vibrantly colored flowers, hugged closely by a lovely colonial town with its accompanying church dome ubiquitously in the background. Sucre also followed the plaza trend with attracting many shoe shine boys. These kids search and investigate persistently for the dirty and unpolished footwear belonging to anyone in the area. I am not exaggerating about persistence here "“ 99% of the days I wore flip flop style sandals, but this did not deter the ruthless salesmen in attempting a pseudo-shine.

In Sucre I decided to listen to my $30 Discman on a brilliantly clear sunny day. A group of these kids approached asking me for a shine, and I threw out a smart comment as I was wearing my beach sandals. Instead of moving onto the next shine subject, they inquired, "What are you listening to?" I then had the chance to introduce these kids to my music from my far away land (Southern California). What a treat it was to see their reactions – most were only being polite in saying that they liked the sounds, while one shiner was genuinely thrilled by the music of "Sublime." After being impressed or possibly falling for his game, I took the "Sublime" kid to lunch in the nearby central market. I followed as he made his way through the maze of food stalls until he declared that we had arrived to the best lunch area in the Mercado [market]. I asked about his daily life and school, he questioned me about California, and we shared a memorable meal together that we both enjoyed for the same and different reasons.

I travelled through South America to better speak my gringo Spanish. I found a school in Santa Cruz, Bolivia offering private tutoring for next to nothing, so off I went for a month of study time. Staying true to formed style, after arriving I headed straight for the Plaza 24 de Septiembre to people watch (Surprisingly I spent the night there as well, but that was not on purpose and is not entirely remembered). "Would you mind 'practice' English with me?" a Santa Cruz man asked as I sat on a bench. From that moment on for the following 30 days Milton (the local) and I were on a path together. We would meet every day to intercambio [interchange] for an hour or so. Our daily appointments progressed smoothly, and eventually we found ourselves in karaoke bars for some of the evenings "“ Milton singing tunes such as "Hotel California' in English; I would sing "En El Muelle De San Blas" by Mana among others. We still email each other occasionally to recount some of the late night sessions and send best wishes.

Some of my favorite plaza experiences included being asked if I was an America due to my politeness and openness (such a welcome compliment after hearing so many negative comments directed to America by others), watching protests, being gently woken up at 6AM by a policeman's baton, or simply existing in a peaceful and real outside communal world. My travel experiences would be incomplete without all of the rich plaza memories. Some of the settings were touristy, many of them were not, but all contained the local flair of life. I recommend camping out in one of them for a few hours to anyone wanting to get a genuine glimpse of the local culture.