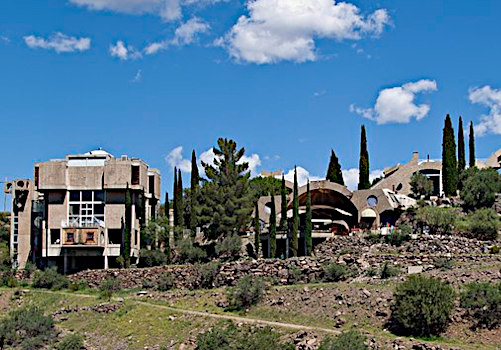 In the summer of 2019, I drove myself and two puppies to Arizona. There were no hard deadlines on this trip, I had no reservations or plans, in fact, I had done little research in advance about my final destination. I had noticed in myself a defiant loyalty to the destination whenever I made strict plans for travel. However, on this trip I was looking to challenge myself, to broaden my horizons on what I perceived to be the point of travel, and I did this by making only one plan, to see Arcosanti at sunrise.

On the road to Arizona, I drove on the 10 freeway, crossing into Arizona through Blythe. It was hot in the summer desert; the dry climate sucked the moisture right off your lips. From the 10 west, I turned north on the 17 freeway just skirting Phoenix and avoiding more cement jungles. On this trip I was looking for a different type of wild, and yet I had no idea what I was in for.

The road to Arcosanti is a dirt path that is mostly unmarked and unremarkable. To the right I could see the expanse of the desert and the distant horizon, not a single erection in sight. The only sign to mark the entrance read Arcosanti in a steel relief suspended on a circle slab, later I am to find out that it was made on site. The parking lot is big enough for RV’s and tourist buses, though when I arrived it looked desolate and empty.

There is a simple peace in emptiness, a quite long breath that may remain undisturbed by the accompaniment of passersby. My puppies loved the dirt, they loved running up and down the ramp and stairs, but they did not love the cacti. They learned quickly to stay away.

At the front counter I learned that rooms were available, and they even had a room with a kitchen option. However, I was more inclined to try the cafeteria on site. Staffed by resident students and volunteers, this oasis in an otherwise desolate land provided nutritional value in their meals without the guilt of leaving a large footprint. In Arcosanti, all the food is used for composting, and most meals are either vegan or near vegan, and the portions are moderate.

The desert outside was hot even in the wind, but inside the cafeteria it was quite cool. Arcosanti does not have air conditioners and relies on the architecture to provide adequate air circulation and shade. One such corner I walked by on my way to find my room. It was a corner of the main building structure that would hang over the natural slope on the hill it was built on. There I found a small pond and places to sit and enjoy the view in the cool shade.

While sitting there, I saw my puppies became a bit agitated, though they were mostly looking curious. What are they looking at? I thought. It took no time at all to notice a baby skunk. I was nervous, but the skunk looked undisturbed by us and left without much to say. I did get to take its picture, but I much preferred that our paths not cross again.

I made it to my room, a space big enough for us, a twin bed, toilet and shower clean and minimalist. Though the decor looked simple, there were beautiful colors and shapes in the cement structure. I slept early because there was only one thing on my plan: to wake before sunrise. I woke and dressed and walked the hillside using my phone as a flashlight. I followed the dirt path that led to the viewing canopy installed for observation of the structure as a whole.

It did not disappoint, I had reached my destination. The sun rising in the east colored the sky magenta and it was accompanied by picturesque puffy clouds, this was the backdrop of Arcosanti that morning. A rectilinear structure stage left, and wave after wave of curvatures to the right. The arcs in the structures were made by digging a curved hole on the ground where the color would be placed right on the dirt and cement poured on it. Once dry, the pieces would be lifted some odd 40 feet in the air and connected to create grand spaces that reminded me of amphitheaters I had visited in the ruins of Pompei. It came to no surprise that the architect and father of Arcosanti, Paolo Soleri, was an Italian native who moved to the United States to avoid being drafted by the Mussolini regime. After which he interned for Frank Lloyd Wright, and fell in love with the Arizona desert. Soleri designed Arcosanti with a singular vision in mind, how to connect urban living with nature.

An Arcology Prototype – arcology is a set of design principles, a blending of the words “architecture” and “ecology”: www.arcosanti.org

Louis is a studio art graduate from College of The Arts at CSU Long Beach. While there she deeply enjoyed her experience with writing about art. She enjoys traveling for the purpose of exploring art in person, and hopes her writing will inspire others to do the same. 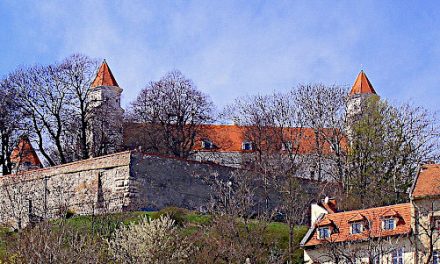