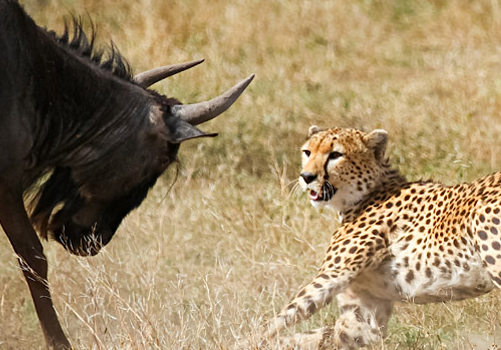 Ever since my first safari in South Africa, on each subsequent safari, I have been so bold as to have a particular animal that I hope to see and I tell my guide (knowing, of course, they have no control over what wildlife chooses to present itself). So on my recent safari in Tanzania, I told my Endless Safaris guide I wanted to see a baby cheetah. He said the best chance we would have for that was in the Ndutu region of the Greater Serengeti.

The safari had hardly crossed into this area (Ndutu) when we came across two male cheetahs resting in some low bushes. After just a short time, the guides (driver and guide) talked between themselves briefly and then said they thought these cheetahs would make a kill shortly. There were a lot of wildebeest and zebras grazing not too far away. The jeep drove what seemed to me a very long distance away from them and waited. The driver moved us a couple different times even further away, projecting the trajectory the cheetahs would take toward their prey.

I waited nearly an hour while more and more vehicles parked next to us, clearly making the same anticipation. I had my two cameras with different lenses ready to go. I sat in the still heat, waiting for something to happen. And then boom … “He’s up and running,” said the driver.

A Cheetah brings down a wildebeest ©2019 Shara Johnson

The Cycle of Death…

I sprang up out of my seat and launched over to my cameras trying to focus in as quickly as possible. While I was so focused on capturing photos, time stretched out so I hadn't known exactly how long the chase lasted, but after I got home and looked at the time stamps, I saw that the whole thing from the time of my first photo to the time of my last was only about 30 seconds. Thirty seconds of sheer exhilaration watching the power, the speed, the incredible agility of the cheetah taking down a wildebeest.

Whew boy! That was unexpected and I felt I couldn’t ask for anything more.

The next morning I headed out and the guides suspected a lion kill might be imminent. I watched a pride of lionesses for a while but then, after some discussion between themselves, the guides said they now thought it probably wouldn’t happen, should we move?

I always trusted their intuition, so the jeep drove away to see what else we might find. And can you believe it? The first thing we ran across was a mother and her cub — a baby cheetah!
This just about brought me to tears of excitement, I was so beside myself I could hardly even fumble around with my camera to get a shot, for I didn’t know how long they would stay near. I might have only a few seconds to make a capture.

What I came to Tanzania hoping to see

But as it turned out, the momma and baby were in no hurry and I spent probably half an hour with them with no other vehicles around. Just us (me, my mom and our two guides) and this precious secret.

So I hope I haven’t jinxed my winning streak by telling you about it! Frankly, I don’t know what can top a baby cheetah anyway.

Zebra mothers and foals at the water ©2019 Shara Johnson

The rest of the time in Ndutu was anything but boring. I saw more zebras than I have seen on all my other safaris combined. The jeep parked near a marsh where zebras came streaming down on all sides to cross through the water. Mothers together with their babies, and males chasing and biting each other, their calls (I don't know how to approximate them with letters!) were almost deafening at times when a whole bunch of them would take up at once.

One of the birds I was really hoping to see on this trip, which I had only seen in photographs, was the elegant Eurasian roller, with more pastel coloring than its popular cousin, the lilac breasted roller.

A Lioness and her Cubs

Second only to seeing the cheetahs was spending time with four very young lion cubs. Our guides thought this was probably the first time the mother had brought them out from the tall marsh weeds where she kept them hidden even from her own pride for a couple months. Today may have been the first day she introduced them to one of her sisters.

I think one of the most remarkable things about these apex predators is how they can use the same jaws that crush prey to so gently lift their babies and carry them. This mother seemed to like to pick up her cubs just for the sake of picking them up … she'd move one over a few feet and put it down, then pick up another one, move it just a little ways, and then it would trundle back over to the cub pile.

Again I had them to myself for a long time before a couple other vehicles came over to investigate why we were parked there.

Lion and Cheetah, Oh My!

Although every animal encounter on safari is special, my time in Ndutu was of a rare caliber. This area was specifically touted to me as the place to see cheetah and lions, and it did not disappoint. 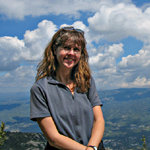 Shara Johnson lives in the Rocky Mountains of Colorado. Although she lives
in a little slice of heaven, her passion is international travel. She writes
literary nonfiction, and photography consumes an ever increasing amount of
her time and budget. She shares her travels on her narrative blog, SKJ Travel, where you can read more about her safari in Tanzania.

Advice on the Authentic Experience part3