As is so often the case, the tragic and the beautiful dwell side by side in Galicia. This is particularly true for Camarinas, a pretty seaside town on the Atlantic coast, in the middle of the Costa de La Muerte, aptly called the Coast of Death because of the many shipwrecks, caused by roaring storms and treacherous cliffs and rocks.

The name of Camarinas is forever associated with the “Serpent” an English ship which crashed on the rocks there in 1890, claiming the lives of 175 young British sailors. Only two survived and made it on dry land to tell the tale. Most of the bodies were eventually washed shore and are buried in a cemetery known as the English cemetery, overlooking the site of the tragedy. Incongruously, the barometer of the ship, 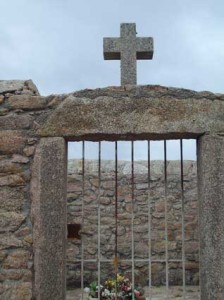 which is still in working order and was eventually recovered, is today embedded in the wall of a house near port. It’s even sign posted.
On a more pleasant note, Camarinas is also the centre of Galicia lace making. Two shops are located alongside the sea walk where the skilled girls show how they work and make the lace by hand. Their fingers virtually fly over the board where the threads are hanging from, kept in place by pins and forming the pattern by small wooden sticks attached to the thread.

A monument in the town square features a hunched over lace maker and next to it is a lace museum. Among the traditional lace and everything related to the process, the museum exhibits the most beautiful gowns designed by modern Spanish designers and adorned with hand made lace.