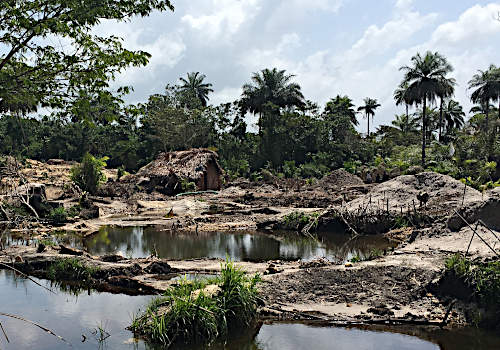 Outside of Freetown ©2020 John and Tara Newby

I don’t know what day it is anymore. Time is something marked as the sun passes through the sky and then it is night and the dogs start to bark, and then it is light again. My world is three colours, the blue vast sky, green dense jungle, and red sticky soil. Sometimes it rains, but mostly it’s hot. It is uncomfortable but bearable. Sierra Leone is simple and the rules, not made by men, exist to serve only the wild. It is an adventure that belonged to men centuries before my arrival, the adventure endures the same.

I landed in Freetown and checked into my hotel. Overlooking a shanty village in the valley below, the next morning I sat with a coffee watching young boys in ripped clothes wielding big sticks in their small hands and hunting stray dogs, thumping their chests, and shouting into the wooden shacks as if this were a measure of success. “Broken”, I muttered into my coffee, as the boy yelled across the valley, looking at me as I stared back. It had begun, my journey would start here and head deep into the Sierra Leone jungle, visiting local villages, and hopefully a diamond mine. I was assured these diamonds sparkled and were blood free. Who could say, I was curious and that’s always been enough for me. 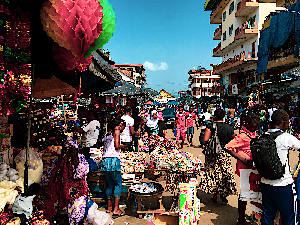 Not so long ago just outside of Freetown, Mars, the Bounty chocolate manufacturer, had filmed a coconut dropping from a palm on the beaches of Sierra Leone. 11 years of civil war and an Ebola outbreak had since rendered the country more dangerous than exotic. Standing on the beach littered with plastic and dog shit, it is still very possible to see the beauty that exists here, long white beaches, turquoise seas and palm trees rustling in the gentle wind. Paradise is a breath away, but right now in a parallel time.

I jumped in the truck; the newspaper sat next to me on the passenger seat read ‘Sierra Leone Ebola free’!! The tent hospitals still stood on the outskirts of town, and people were still afraid. I’ve never seen it myself, but I can imagine why the fear of that rabid disease lingers, it’s nasty.

Within 50 miles of Freetown, depending on which road you take, the asphalt, along with the cement buildings, runs out and it’s onto the red dirt and wooden shacks, and then just the red dirt tracks and jungle. Thick engulfing jungle, that sucks the sky into it and holds the rain and light hostage. 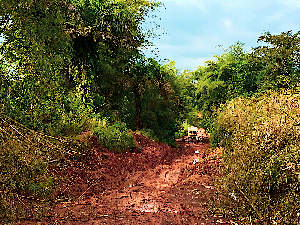 The red road, empty of vehicles is long and straight. I can see ahead of me for miles. It rolls over hills with deep puddles in the troughs from days of rainstorms, deeper than the truck I’m in can manage, and so when they arrive, I need to skirt the edges carefully, occasionally jumping into one to cool down. And then, the inevitable happens and the truck gets stuck. The rain starts to fall shortly after, like it only can in the jungle and it’s miserable. The deep puddles fill up and it’s not fun anymore. I wait, and children appear from the forest, in drenched rags but with big smiles on their faces, all teeth and stares. They crowd the truck and I get out to say hi. The rains stopped, the sky lifted and with it my own gloom. The children touch my freckled arms and blonde hair and I start to act like a clown, entertaining them, making friends with them.

I pull out my phone and play some music, AC/DC, and the children crowd around looking at the phones screen. There is nothing to see, and I can see that they are disappointed not to be able to put the music to a picture, so I take may left arm and point it out, pretending to hold the arm of a guitar, my right hand starts to strum the invisible strings and the children think I’m weird. Then I start to move my head back and forth my hair flopping in front of my eyes, head banging and playing air guitar. I have a band of children behind me, all learning the rhythm, joining AC/DC’s beat, we all strum together, and it’s fantastic fun. The truck remains stuck, and the kids disappear back into the jungle, to where I have no clue, but they do, and that’s all that matters.

It takes a passing lorry an hour or so later to pull me out backwards so I can have another shot at passing the same puddle. With a long run up, holding my breath as I crash into it and fly out the other side. The diamond mine will be along shortly.

Deep in the Sierra Leone jungle my destination appears, and a charity worker greets me to his land. Cleared of the jungle, it’s a mud field of craters and rocks, and islands of deep-rooted palms with a small stream running through it. The diamonds he’s mining are being sold to bring money into the local community, I believe his story, I am his guest after all. It’s a small operation of fire hoses, spades, and sweating men, deep to their knees in mud, searching for a hint of a sparkle, grains of sand-sized stones.

I’m shown a diamond and act awed. I’m not here to buy, I’m here for the adventure and feel baffled by their endeavour, although I hide it well because there seems to be pride and contentment in this work. It looks like there is a future for the village, in this nowhere place, under the blue sky, surrounded by the green thick jungle with jewels in this red sticky dirt.

Sierra Leone, is a true wonder of the world, that allowed me for a brief time to feel like an explorer, something that most of Africa, with the $1000 a night safari camps can’t offer anymore. The rawness and the honesty that is the west African struggle is something to truly cherish. Few places do children still find a person’s freckles and the simple act of playing air guitar enough entertainment to pass an afternoon. In few places still does time stand still, so that the day passes only because the sun crosses the sky.

The coolest travel gadget ever

Thailand Thoughts Now That I’m Back