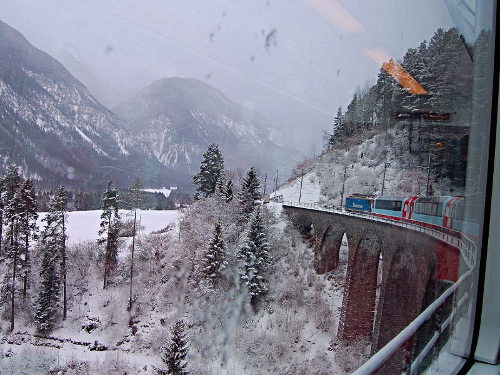 Look closely to see the Glacier Express along a mountainside shot through the train’s expansive windows. ©2018 Ed Rampell

This is the third and final installment in the series about my January journey to the Matterhorn Region, in the Swiss canton of Valais (or Wallis), which has 45 summits at Switzerland's highest areas for skiing. After boarding the Glacier Express at St. Moritz in southeastern Switzerland, where I'd been ensconced in splendor at posh Badrutt's Palace, the first stop scheduled on my cross country train trek to Zermatt in the Alpine nation's southwest was Brig, entry point for visiting the Aletsch Arena.

En route to Zermatt I was greatly anticipating this railroad romp across Switzerland, as the Glacier Express' glassy carriages feature panoramic windows and overhead glass panels renowned for bestowing eye-popping vistas of majestic snowy and icy peaks. The so-called "slowest express train in the world" crosses 291 bridges, passes through 91 tunnels, offers views of not one but two UNSECO World Heritage sites and at the Oberalppass climbs up to 6,670 feet. As if this luau for the eyes wasn't enough, at 11:45 a.m. I was to be served a three-course gourmet luncheon, too.

But, alas, it was not to be – my Alpine train dream was murdered on the Glacier Express. After only about two hours my jaunt was "derailed" due to heavy snowfall. This forced me to disembark and proceed on a circuitous, time consuming detour in order to ride to Brig on a smaller, less resplendent locomotive. In all fairness, Switzerland arguably has the world's finest mass transit system, but the route I had to embark on was equivalent to going to L.A. from Florida by way of New York – instead of just taking the 10 Freeway straight from the Sunshine to the Golden State.

The voyage from St. Moritz all the way to Zermatt takes eight hours, but I spent around that amount of time on my Swiss zigzag just to get to Brig, northeast of where the Matterhorn awaited me. The Glacier "Express" had gone "local" and I moved at a glacial pace. This pilgrim's round about peregrinations were the first sign of how snowstorms would impact the train trip to (and from) my final destination at Zermatt, gateway to Europe's most recognizable mountain, and what was in store for me.

The snowdrifts were so high my guide Jasmine couldn’t even open the door. ©2018 Ed Rampell

From Brig Bahnhofplatz I took another train to the nearby MÃ¶rel station, then rode a cable car (my favorite form of land transport as it is actually aerial) up to Riederalp, 6,500 feet above sea level. Upon arriving I hoofed it to my destination, Hotel Royal, hungry after my travels and travails.

The four-star's Valais Panorama Restaurant offers delicious dining and views, including from a terrace open during summers – but the snowy conditions precluded visibility. The menu has a la carte or four course meal options. While the Royal's eatery focuses on regional ingredients and Valais wine, its evening fusion fare also includes, of all things, kangaroo.

I was served a special "love the mouth" appetizer of Italian veal, then enjoyed a surprisingly sweet foie gras, with apple and tasty carmelized nuts. When it's cold, rainy and/or snowy I gravitate towards hot broth, so I ordered arugula soup, which looked like and had the consistency of pea soup, and warmed me up. For my entrÃ©e I dined on lamb, followed by a surprisingly salty yet lip smacking desert.

After dining and an exhaustive day riding the tracks I retired to my spacious, curvy, pine paneled room with modern dÃ©cor at the Royal, built and owned by Art Furrer, a local boy from the Aletsch area who made good, attaining fame as a stunt skier and appearing in films. During his stints abroad the Swiss athlete taught luminaries such as the Kennedys and conductor Leonard Bernstein to ski. Furrer parlayed his fortune into becoming a hotelier, opening six hotels (one adjoins Switzerland's highest golf course) near his birthplace, of which the aptly named Royal is the poshest. The now 80-something onetime Alpine acrobat can be spotted at his mountaintop properties – Furrer is easily identifiable by the cowboy hat he loves to wear, a souvenir from his years in America. In a droll reference to a celebrated Manhattan restaurateur and raconteur, in 1982 the Christian Science Monitor called Furrer "the Toots Shor of Riederalp," and I enjoyed chatting with him in English.

In the morning, following a buffet breakfast my local guide Jasmine joined me and we found an appropriate pair of pants in the Royal's storage area for me to wear as we trekked through the snow. For the first time in my life I wore snowshoes. I expected them to look like tennis rackets, like in some old Jack London saga about the Yukon. Instead, modern snowshoes are made out of hard plastic or perhaps fiberglass, attached over the boot with straps and a sole strap behind the heel. I was also outfitted with two ski poles, which came in handy as we waded through often thigh high snow, trudging for almost three hours from Riederalp to Bettmeralp.
En route, we rode a cable car, and periodically Jasmine noted that the Great Aletsch Glacier – which at 14 miles in length is Europe's longest slab of ice and the first UNESCO World Heritage Site of the Alps – loomed over us. The problem was the weather conditions were so snowy that I couldn't see the massive glacier. Nor was I able to catch even a fleeting glimpse of the Monch, Jungfrau, Eiger, Weisshorn, 9,412-foot high Eggishorn or even the Matterhorn – all of which are visible on clear days from different points in the Aletsch Arena – due to Switzerland's "Ivory Curtain."

It took us about three hours to trek on our snowshoes to the vehicle-free village of Bettmeralp. The snowshoeing was much easier for the fitter, 20-something Jasmine and I needed refueling. So we devoured a hardy lunch at the pine-paneled Restaurant Alpina Bettmeralp served by a waiter who looked like a Brit soccer hooligan but, to be fair, provided excellent service.

Blanketed by the Ivory Curtain, the 6,463 foot high village of Bettmeralp looked like a lovely Swiss version of a Currier and Ives winter wonderland woodprint. Jasmine led me through the hamlet with its wooden Swiss chalets, passing the beautiful Maria zum Schnee chapel, which Jasmine said is renowned throughout Switzerland. She also stated great vistas are offered from the church – but as all I could see was a sea of white, I had to take her word for it. As a man shoveled snow outside a wooden building opposite the Christian outpost, Jasmine waded through hip-high drifts to, if memory serves correctly, Bettmeralp's small museum. But the snow banks were so high that my lithe guide couldn't even open its door, so we decided to partake upon another popular indoor activity.

In 1908 while encamped in a villa at Riederalp, the American novelist Winston Churchill wrote Mr. Crewe’s Career, a political novel suggested by his own unsuccessful 1906 run for the governorship of New Hampshire. This Yankee scribe is sometimes confused with the future British Prime Minister, Sir Winston Churchill.

But that other Churchill is not the only artiste associated with the Aletsch area: Bettmeralp also boasts its own homegrown talent. In the movie world, an "auteur" – derived from the French word for author – is the singular creative force behind a film. Commonly, auteurs direct movies also based on their own scripts. Cinematic auteurs such as Woody Allen also starred in their films, while Charlie Chaplin – who lived 25 years above Lake Geneva at Vevey – not only acted in his movies but composed the music for them, as well. Actor/director/ writer/composer Mel Brooks once quipped that he was such an auteur that he even punched the sprocket holes in the side of the celluloid so the film could roll through the projector.

However, Rafi Imhof, the ambitious moviemaker of Bettmeralp, has them all beat. In addition to being the singular creative vision behind his Bettmeralp 1.0 – Rafi not only wrote and directed this documentary, but shot and narrated it – he also runs the Alpen Blick cinema where it is screened a few days a week. There, Rafi collects the tickets, introduces the doc, projects it onto a big screen TV, fields a post-screening Q&A and even pours wine for theatergoers, who often must buy tickets in advance because the diminutive, impromptu movie theater is often sold out.

And if that's not enough, the man I'd previously glimpsed shoveling the snow off of the walkway to the cinema so theatergoers could get there was none other than Rafi Imhof, cinema's ultimate auteur. The nonfiction film is not only a travelogue, but poses issues facing Bettmeralp's few hundred inhabitants, as the far away traditional village confronts modern times, in particular the deluge of tourism. For a low budget indie, it was a surprisingly well-made, effective film with some sumptuous cinematography exposing the region's scenic splendor.

I was finally able to see something of the Aletsch Arena – even if it was indoors and onscreen. By and large the Swiss are honest folk (after all, they guarantee snow on the Valais' 1,490 miles of slopes and they certainly delivered) – and I believe them when they tell me stunning views of the Aletsch Glacier, the Monch, Jungfrau, Eiger, Weisshorn, Eggishorn, et al, can be seen from Riederalp and Bettmeralp. After I left these villages and continued on to Leukerbad, the thermal pool village, and Zermatt, it would be about another five days before I'd even see the world famous Matterhorn – and then, due to the snowstorms, I had to be evacuated by helicopter.

I can honestly tell you that I've been to the remote Alpine nooks of Riederalp and Bettmeralp. But I can just as truthfully tell you that I've never seen the sights they are famous for from those distant villages. I hope someday that I will be able to. But until that fine day I advise all would-be wayfarers to check the weather forecasts before venturing to the reputedly exquisite yet visibly elusive Aletsch Arena. 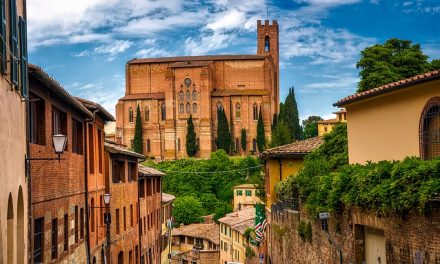