The Colors of Cartagena – Colombia 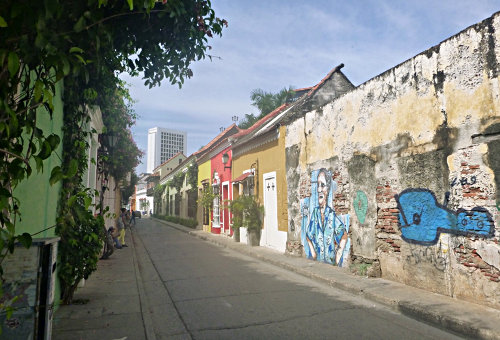 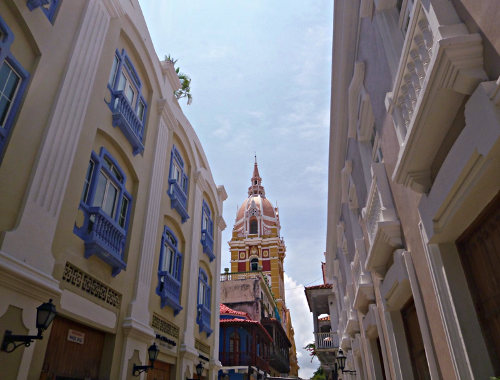 I frequently hear travelers declare that they have a strong preference for beach vacations, nature getaways, exploring an urban setting, or some other genre of travel. These proclamations are often definitive, as if they've found the perfect way to travel for them.

While I wish I had that type of clarity, I've never been able to definitively declare myself partial to a specific type of travel. I like to see it all, and Cartagena offered just that.

I arrived Friday night prepared for the long weekend and was immediately rejuvenated by the activity in the hip GetsemanÃ­ neighborhood, just outside of the famed historic center. The hostel host led me to my room through the winding colonial streets, lined with colorful houses that shined through the dark night sky.

Initially tired from the long 5 hour bus ride from the nearby city of Santa Marta, the lively neighborhood gave me a second wind and I decided to grab a drink once I settled into my accommodation. While the city doesn't have the same centralized nightlife that I'd come to find in other Colombian cities, there are certainly enough bars and clubs in GetsemanÃ­ to constitute a quality nightlife.

I popped into a quieter bar/restaurant called Chacharra, and the bartender asked if he could try a new drink out on me. He made me a mojito with Sprite. Not exactly the classiest option, but it actually tasted surprisingly refreshing, and I enjoyed his excitedness when I said I liked it. After one more drink, I headed back to my hostel to catch some shuteye.

When I went outside the following morning, the sun made me aware of two things: Cartagena is hot, and Cartagena is impressively colorful. I could wander the streets of GetsemanÃ­ and the Centro Historico for days and continually find a new spectacular architectural feat. Each house had its own intricate, charming design with a wide range of colors and flowers. The city is certainly one of the most well-manicured cities that I've ever seen, as I witnessed storefronts putting on fresh paint and multiple restorations project in action.

If I were to make recommendations for what to do in Cartagena, I could point to the wealth of museums, churches and city tours. However, for one day, I think the best way to see the city is to just walk around and take in the gorgeous Centro Historico area. To quote a guide book, "Get lost and found again." I know that phrase is grossly cheesy, but it is truly easy to get lost in the streets of Cartagena. 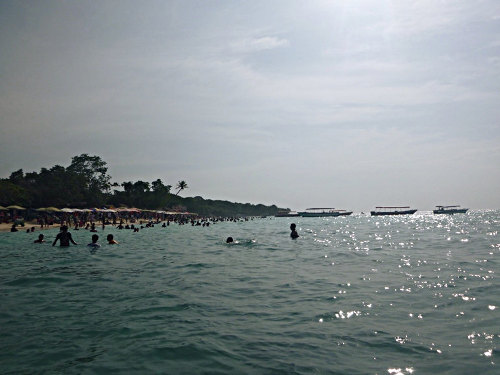 The following morning after a lovely breakfast of eggs and tropical fruit, I headed to the pier to catch a boat to Isla Grande. Before coming to Colombia, I envisioned Cartagena as a city surrounded by gorgeous beaches. While the beaches aren't necessarily far, I learned that to get to the clear blue Caribbean waters, I would have to take a boat ride to one of the islands just off the coast.

The experience of finding a boat served as a microcosm for traveling Colombia's Caribbean coast. Immediately approached by people trying to sell seats on their boats, I bought my passage and entered the dock. The guide informed me that the boat would leave in 10 minutes. As I have come to expect, the boat did not arrive for 40 minutes and it left about 50 minutes after I entered the dock area.

The ride out to the island was smooth, especially when compared with the roller coaster ride on the way back. The first stop was at Bocachica to pick up a few employees of the transportation company. Next, it stopped at Playa Blanca, about 30 minutes from Cartagena, which can be done as a day trip from Cartagena. The water was beautiful and the long, sandy beachfront was filled with vendors, restaurants, and pool chairs for rent. The beach seemed like a happening spot, but I was headed for the more secluded Isla Grande, about an additional half hour, one hour in total, from Cartagena.

When I reached the island, I realized that in one short boat ride the tenor of the trip had changed. This place defined island living. Seven different brightly colored hostels, all of which have additional locations in cities throughout Colombia, surround a communal pool, bar and restaurant area. When I met my hostel host it felt like I was crashing at his beach house, when he casually offered me my choice of bunk beds.

The island itself is very simple. I walked to Playa Libre, a small but beautiful beach, in about 40 minutes. To paint a picture of the island's size, this walk constitutes almost the entirety of its length. Further evidence of its smallness, I did not see one motorized vehicle throughout my stay.

However, the highlight of the island portion of the weekend was the Enchanted Lagoon. A night swim in the lagoon with fluorescent plankton, that lit up as I moved around was incredible. I had a difficult time capturing the lagoon's effect on camera, which made it not very Instagrammable. It's truly a place that has to be seen to be believed!

Overall, the swim brought me back to a central theme of the weekend: color. From the islands to Centro Historico's spectacular architecture, the awe-inspiring colors of the city and its surrounding islands reflect its vibrant energy. Whether you prefer that color on Caribbean beaches, enchanted lagoons, colonial churches, homes dotted with flowers, or a mix of all the above, now that's up to you.

Benton is a freelance writer with an affinity for all things travel, beer, and Minnesota sports. He is spending the year working in his favorite part of the world, Latin America, split between Santa Marta, Colombia and Puerto Morelos, Mexico. You can follow his adventures at bttogdotblog.wordpress.com

All photos by: Benton Graham