The Monkey Temple of Kathmandu 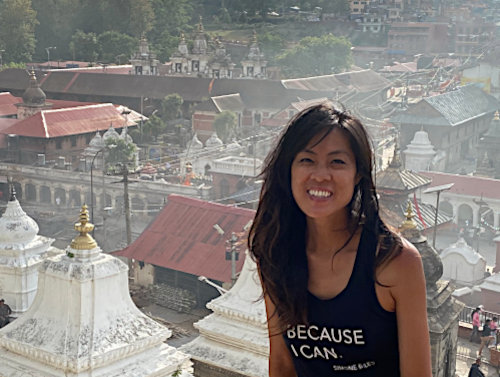 From the opposite side of the Bagmati river, I could see all the shrines and temples of the Pashupatinath temple grounds.
©2022 Annie Chen

It didn’t take long for me to lose track of how many people had asked me, “What are you going to do in Nepal if you’re not planning to go trekking?” I was determined, however, to prove that there was plenty to do. After landing in Kathmandu and a meal of fried buffalo momos (Nepalese dumplings) and thukpa (noodle soup), I set off westwards through town towards Swayambhu Mahachaitya, commonly known as the Monkey Temple.

Along the way, I couldn’t help but wonder at all the doors and engravings of the Star of David around town. What was the connection between the Jews and Buddhism and Hinduism in Nepal? It wasn’t until later that I learned the six-pointed star was actually a kagome symbol, present in Hinduism and representing the balance of opposites in the universe.

After crossing over the Bishnumati River on a precariously swinging bridge, I also took note of all the snake statues, some quite large in the middle of the street, while others were small in below-ground square space with steps leading down towards a water conduit. Finally, I asked a young man what all the people were doing huddled around the small snake. He laughed as he explained that it was actually the revered serpent god of water, Nagaraj, and his presence was ubiquitous due to spigots built into the traditional waterway system of Nepal where locals will still go to wash their clothes or fill up jugs with potable water.

Finally, I reached the bottom of the 365 steps leading up to the Monkey Temple. Strings of colorful prayer flags flapped freely in the wind, blowing well wishes of happiness and peace to everyone around. I paused frequently on my slow hike up the steep steps to let a barrel of monkeys clamber down the steps, and finally, after an informal ticket counter check, I stepped up to the top platform where the massive Swayambhunath complex, from the 5th century, was. 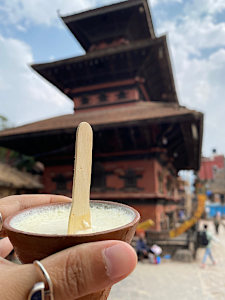 My favorite local dessert was Ju Ju Dhau, a local curd, which is comparable to slightly sweetened yogurt. ©2022 Annie Chen

The enormous stupa intimidatingly greets visitors with its eyes painted on the top and a curved nose, with trailing prayer flags radiating out in every direction. Vendors called out to get my attention and I saw groups of young teenagers taking selfies and filming TikTok videos on nearby panoramic viewing platforms overlooking Kathmandu. I trailed along the circular path with prayer wheels, following the other worshippers who extended their hand to spin the wheels as they passed by, always walking clockwise around the stupa.

I meandered around the smaller temples where priests were actively worshiping, then followed some stairs to the World Peace Pond, with a surprising number of local visitors trying to land a coin in the center of a jar, and a second hilltop with several temples. At one point, while navigating the many shops selling singing bowls and canvas paintings of yaks in the Himalayas, a calming silence fell over the stairs and I looked down to see a man in bright orange, red and golden robes and scarves with a thick beard and a red headwrap. He was climbing the stairs slowly, barefoot, with several strands of prayer beads around his neck and a long sword-like staff in his left arm wrapped in red and gold. The most striking part was his face; the forehead had red and yellow paint while the nose and mouth area had a light-colored powder covering it.

I leaned towards the shopkeeper with an inquisitive, or perhaps bewildered, look and he nodded, explaining that he was a sadhu, a holy man within Hinduism belonging to one of thousands of sects in Nepal and India. The powder turned out to be ash which represented the death of the sadhu’s attachments to the earthly world and a dedication to his spiritual life. It wasn’t uncommon for them to go for years without speaking, which I tried to imagine, as the sadhu moved slowly, unbothered by the stares and cameras, padding upwards to the temple.

On the way back towards the center of Kathmandu, early monsoon season decided to rain on my walk through the historic Durbar Square towards the busy Asan Bazaar. Dodging cars in the pedestrian main road, umbrellas exactly at eye level with my height, and motorcyclists splashing water on the uneven roads when they can get enough speed, I hopped over to the side to catch my breath. 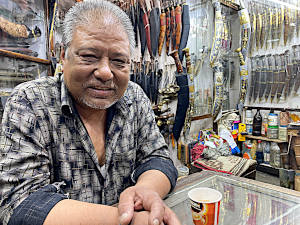 Suman, a local shopkeeper, took pity on me and gave me shelter and delicious local milk tea. ©2022 Annie Chen

“Take a seat until the rain stops.”

I turned around and found an older gentleman, smiling calmly, sitting behind a glass case with traditional Nepalese dolls and some angular daggers with engraved handles sticking out of their sheaths. I plopped down on a small round stool and had a chance to learn about Suman, a seventh-generation owner of the khukhuri – the Nepalese national weapon- shop. He wistfully spoke about his daughters who studied abroad in the UK and Australia, places he was unable to visit, but also also contently about their returns afterwards and homes just down the street from the shop. As the rain let up a bit, Suman ordered some Nepalese milk tea from a man passing by with a steaming kettle. We sipped on the sweet drinks out of small paper cups while he gave me suggestions for what else to see around town.

Finally, the streets dried up enough and I continued on my way to the Pashupatinath Temple grounds, a widespread area covering both sides of the Bagmati river, and a UNESCO World Heritage site. Inhaling a 25 NPR ($0.20 USD) homemade ice cream, kulfi, then some ju ju dhau, a homemade sweetened curd which was surprisingly delicious, I finally smelled the incense of the main entrance.

The storage center for shoes was free for all visitors, and I made my way to visit the main temple dedicated to Pashupati through a guarded entryway into the complex. Many sadhus were sitting around in the shade, gazing off into the distance with a serene expression, and I caught a group of women worshiping at one of the side temples. The main Pashupati temple was closed, as it turns out, to non-Hindus and Hindus of Western descent, though I glimpsed the beautiful gate with its various gods protecting the entrance.

Bodies are washed carefully and with great care in the holy river, particularly the feet, and then wrapped in orange cloth and marigold flowers. ©2022 Annie Chen

The most well-known part of Shree Pashupatinath, the oldest Hindu temple in the country, was actually not the temple itself but what takes place behind it. I followed a crowd towards what I believed to just be the river where I could cross over a few smaller bridges to the Pandra Shivalaya shrines and smaller temples up the hill. However, a massive flame came into view as I rounded one temple, and I noticed a bleacher-like sitting area facing not just one, but multiple large fires burning on square platforms jutting over the river.

A tour guide, Letsmi, stepped up to my shoulder and asked, “Never seen a cremation like this?” I glanced back and with a shock, realized I was watching simultaneous bodies being burned over the holy river. Letsmi detailed how it could take up to three hours for a man to burn, but four for women since they carry more water in their bodies. The spot where one’s body can be cremated along the river is dictated by their caste, and he pointed towards one larger square. “That one, sometimes if many people die in a car accident, they put them all together, it’s cheaper.”

I strolled over one of the bridges to get a better look from the other side, and indeed got a clear view of the washing of the body. Professional cleaners bathed the corpses’ feet, taking care to cover the lower half of the body. I spotted the family nearby, sobbing into one another’s shoulders, and a group of mourners gently moved the cleaned body afterwards onto a wooden pallet. They then draped it in a bright orange cloth, laying chains of marigold flowers around the body and escorted it to its allotted spot.

I’ll never forget that sunset, as the air cooled slightly and it got slightly darker, with the cries of the relatives carrying over the river and mixing in with the monkey chattering as they fought over cracker crumbs on the steps of the Pandra Shivalaya shrines.