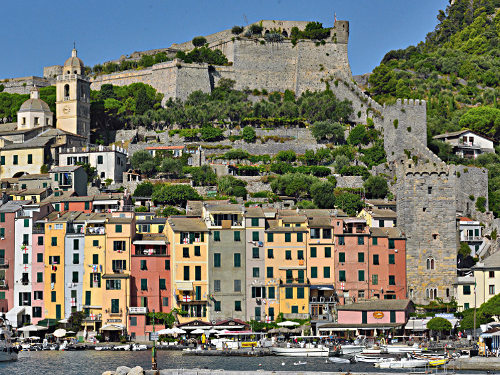 The ferry boat glided out of the harbor of La Spezia beginning my journey to the famous 5 villages of the Cinque Terra. The weather was perfect and water an indigo blue as we cruised along the Ligurian coast. The famous villages with their small harbors, colorful houses, and steep hillsides are some of most picturesque in Italy. Much to my surprise our first stop along the coast was to the village of Porto Venere on the Bay of Poets. This stretch of coastline is known as the Riviera di Levante, the coast of the rising sun.

I knew nothing of this town and was concerned that my visit here would cut into my time in the other villages. By the time I re-boarded the ferry to continue north, I had found a place that should be considered the 6th village of the Cinque Terra. 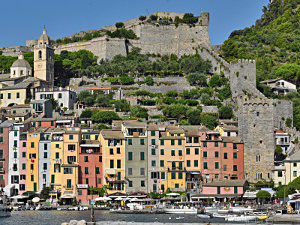 The row of tall skinny and colorful houses along the waterfront were the first things to catch my eye as the ferry boat cruised toward its dock. These Palazzata or "Fortress Houses" provided a wall of homes protecting the harbor during medieval times. The tall narrow design with no balconies would have made them impossible to climb. They provide a palette of colors as you walk along the promenade toward the entrance to the old city. The stone walls of the fortress climb the steep hillside to the castle at the top. I entered the medieval town through Porta del Borgo "“ the old city gate. The Capitolare Tower stands guard next to it. A narrow street runs the length of the waterfront along the back side of the Palazzata or you can take the steep path up to the church and castle above.

I wandered along the main street, the Via Capellini. The houses along the narrow street provided shade from the late morning sun. Houses in Porto Venere have two entrances, one on the waterfront and another a few stories higher on the main street. A little boy came strolling along in a colorful outfit. Small stores, cafes and boutiques line the cobblestone lane. Steep stairways periodically lead downward to the harbor like tunnels. The street ends at rocky entrance to the Grotto dell'Arpaia or Bryon's Grotto. The clear blue waters were a favorite of the poet Lord Bryon and his friend Shelley from which they found inspiration for their work. The local dark, veiny Portoro marble, used to build the columns in the church of San Lorenzo can be seen along the cliff wall. The Genoese castle Doria sits high on the hill above the grotto guarding the town just as it has for hundreds of years. 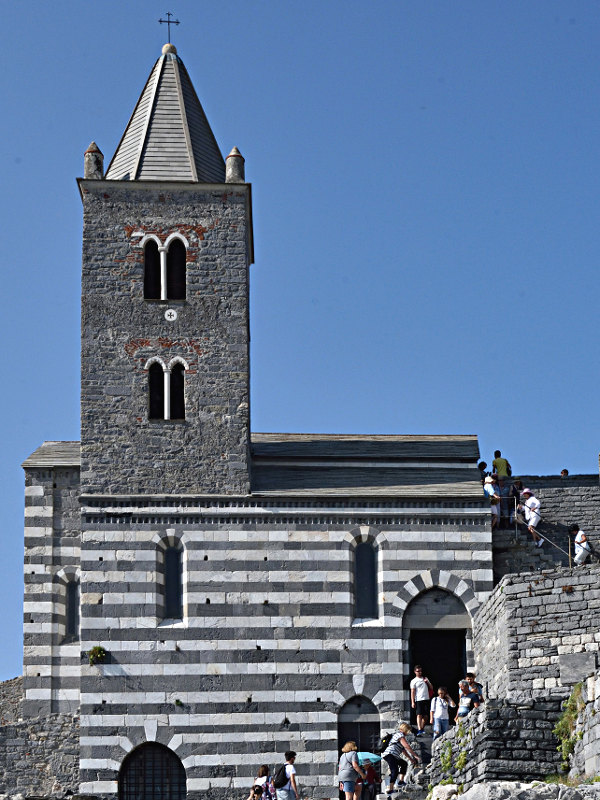 At the end of rock promontory that protects the grotto sits the black and white Church of St. Pietro on the Spallanzani Square. This Genoese Gothic Church sits on the site of ancient temple from Roman times to the goddess Venus. This is how the town got its name. The black and white motif extends to the interior of the chapel where it gives a medieval feel as you gaze at the altar highlighted by the sunlight coming in the narrow windows. It was built in 1198. During the long war against Pisa, Porto Venere was an unconquerable bastion of the Republic of Genoa, the church of San Pietro on the cliff top was built by the Genoese as a gift for the help of the citizens in the conquest of Lerici.

The waves crash against the rocks as you gaze into the Bay of Poets at the nearby archipelago of 3 islands that are another reason that Porto Venere is worth a visit. Palmaria remains the largest of the three with the other two being Tino and Tinetto. Boats from the harbor regularly visit the only inhabited island of Palmaria.

I walked back toward the old gate past alleyways that are known in Liguria as "caruggi" – which are specifically built to protect from the blazing summer sun and windy winters. I passed a quaint restaurant with only a few chairs outside due to the narrowness of the street. Fresh seafood offerings of mussels and anchovies are a popular choice. The Ristorante Portovene looked inviting but I continued to explore the other sights this intriguing village had to offer.

The Romanesque church of St. Lorenzo, erected in 1098, lies on yet another ancient temple. This one dedicated to the god Jupiter. It is also pledged to the patron saint of Genoa whom you can see martyred above the entrance. It was heavily damaged both in the 14th and 15th centuries due to attacks by the Aragonese and fires. A notable event takes place here every August, as it also is the Sanctuary of the "Madonna Bianca", White Madonna, who is carried throughout the entire town on the evening of the 17th.

At the top of hill lies the Castle Doria or "Castello Superiore" built for the Genovese family who ruled the area from the 12th thru the 16th centuries. It remains the best spot for incredible panoramas of the island and Church of St. Peter, and costs 5â‚¬ to visit between April and October. 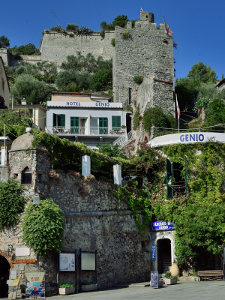 I finish my visit to Porto Venere by having an Apertivo. I sipped a cold Italian lager called, Birra Moretti, as I gazed at the old city walls that had a hotel built into it. The Hotel Genio would be a great spot to stay at if you wanted to visit Porto Venere. Porto Venere can be reached by boat which runs during the day between Porto Venere, La Spezia and the Cinque Terre villages. I think this is the best way to travel here, unless you want to hike.

The rest of my day was spent visiting the famous villages of the Cinque Terra. I waked the streets of Vernazza and Monterosso and was able to see the other villages of Riomaggiore, Corneglia, and Manarola from the deck of my ferry boat. That evening back at my hotel in La Spezia, I kept thinking about Porto Venere and the Bay of Poets. It was beautiful, less crowded, colorful, historical and should be considered a must stop as the sixth village of the Cinque Terra. 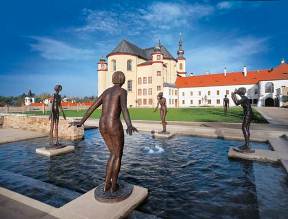 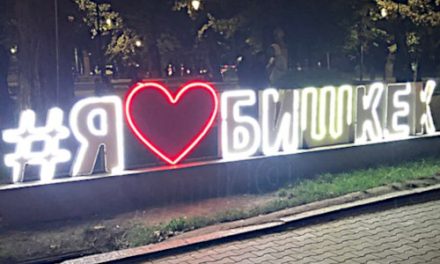