Part I: Lucerne in the Sky With Diamonds 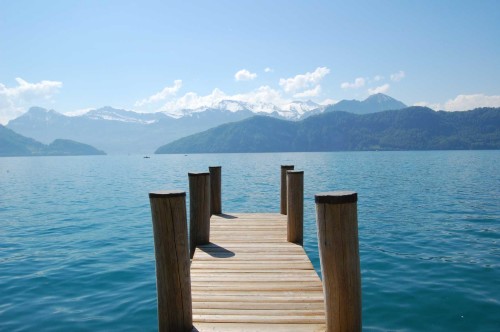 Mark Twain, who died 100 years ago, is primarily remembered as the fictional chronicler of Tom Sawyer and Huckleberry Finn's Mississippi River adventures. But Twain (born Samuel Langhorne Clemens) is also one of the best travel writers since Alexander the Great, turning phrases like few could. He described the then-Sandwich Isles as "the loveliest fleet of islands that lies anchored in any ocean," arguably Hawaii's best, most-quoted promotional slogan. Twain regaled readers with tales of his "variegated vagabondizing" at Europe and the Holy Land in 1869's bestselling The Innocents Abroad and at Hawaii and the Wild West in 1872's Roughing It. Twain's Innocents follow-up, 1880's A Tramp Abroad, is the itinerant author's fanciful account of traversing Switzerland, with some of the wildest mountain exploits since Hannibal crossed the Alps. (Of course, Twain's "tramp" refers to trekking — and not sleeping — around.)

A century after Twain's 1910 death, I went to Switzerland — which Twain called "simply a large, humpy, solid rock, with a thin skin of grass stretched over it" — paying homage to the humorist from Hannibal, Missouri. I embarked on an Alpine odyssey, tramping around the Swiss Alps in Twain's footsteps, comparing his 130-year-old words to what's there now. 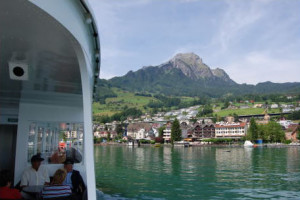 As Twain wrote in Tramp, Lucerne (Luzern in Swiss German) remains "a charming place… the beauty of the lake had not been exaggerated… [it's] alive with fishes, plainly visible to the eye, for the water is very clear." Twain doesn't mention the swans currently riding Lucerne's currents, but continued: "we were content to enjoy looking at the blue lake Lucerne and at the piled-up masses of snow-mountains that border it all around — an enticing spectacle… for there is a strange and fascinating beauty and charm about a majestic snow-peak with the sun blazing upon it or the moonlight softly enriching it… we concluded to … excursioning around on a steamboat, and a dash on foot at the Rigi… we had a delightful trip to Fluelen, on a breezy, sunny day. Everybody sat on the upper deck, on benches, under an awning; everybody talked, laughed, and exclaimed at the wonder scenery; in truth, a trip on that lake is almost the perfection of pleasuring. The mountains were a never-ceasing marvel… they climbed high enough toward the sky to meet the clouds and veil their foreheads in them."

I, too, became a tramp aboard a "pleasure steamer," departing from the boat landing near (Lucerne's train station) on aquatic excursions across Central Switzerland's "Lake of Four Forest Cantons" to Rigi and Mt. Pilatus (named after a remorseful Pontius Pilate who, according to legend, drowned himself there). En route to Pilatus we lazily crisscrossed the placid pond, stopping at ports-of-call named Hertenstein and Alpnachstad, floating beneath brilliant sunshine, light brightly reflecting off occasional ships wafting by. Evergreen water mirrored the encircling verdant mountains, created by that greatest "greenie" of them all. Yonder I glimpsed hamlets with chalets that Twain called "far-away homes look[ing] ever so seductive… so remote from the troubled world, they dozed in such an atmosphere of peace and dreams — surely no one who has learned to live up there would ever want to live on a meaner level." Cruising, I felt sans souci, without a woe in the world. Like Twain, I did "my best to get all I possibly could of it while it should last."

What Twain dubbed "the big panorama all before us" unfolds from on high; the Jungfrau and Eiger are glimpsed from afar. I ascended 6,953-foot Mt. Pilatus via the world's steepest cogwheel railway. Twain rode 5,905-meter Rigi's train: "It seemed incredible that that thing should creep straight up a sharp slant like the roof of a house — but there it was… doing that very miracle… The locomotive-boiler stood on end… it and the whole locomotive were tilted sharply backward. There were two passenger-cars, roofed, but wide open all around. These cars were not tilted back, but the seats were… enabl[ing] passenger to sit level while going down a steep incline. There are three railway-tracks; the central one is cogged; the 'lantern wheel' of the engine grips its way along these cogs, and pulls 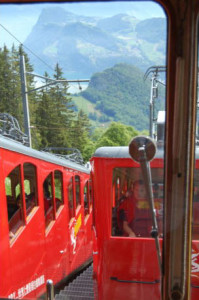 the train up the hill or retards its motion on the down trip [at] three miles an hour… up or down, the locomotive is always at the lower end of the train… The passenger rides backward going up, and faces forward going down… [I]t started abruptly downstairs, and I caught my breath… One expected to see the locomotive pause, or slack up a little, and approach this plunge cautiously, but it did nothing of the kind; it went calmly on, and when it reached the jumping-off place it made a sudden bow, and went gliding smoothly downstairs, untroubled by the circumstances. It was wildly exhilarating to slide along the edge of the precipices, after this grisly fashion, and look straight down upon that far-off valley… the train came sliding down, and when it reached the right spot it just stopped — that was all there was 'to it' — stopped on the steep incline, and when the exchange of passengers… had been made… moved off and went sliding down again."

My Pilatus descent was minus railway but nonetheless adventurous. I actually zoomed down Switzerland's longest summer toboggan run (Pilatus also boasts zip lines; somehow I resisted). Then I hiked to Krieneseregg, but my luck started running out: it began raining, although not, as Twain put it "in dead earnest," and I had rain gear. However, while hoofing it I realized the cable cars would soon stop flying, and gamboling all the way down a soggy Pilatus was daunting. Pressing on, I reached Krieneseregg minutes before the day's last gondola; airborne I swooped 3,369 feet down to Kriens where I could catch a bus back to town. Aloft in the cable car, the bejeweled beauty of the glistening, white-topped Alps was dazzlingly psychedelic, as I breathlessly beheld Lucerne in the sky with diamonds. 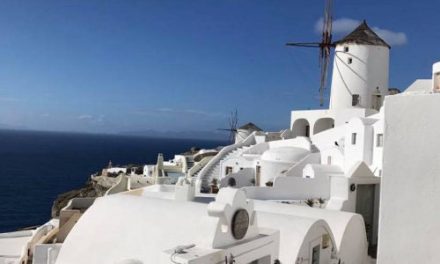 Easter Island: Land of the Moai