NEW YORK, NY (January 19, 2011) — Encompassing much of the country's northern boundary and isolated by the rugged Kackar mountains, the narrow coastal Black Sea region of Turkey, is well off the beaten path of many international travelers but treasured by those who discover its unique charms. In addition to fascinating reminders of Turkey's extraordinary history, the region is renowned for its magnificent coastline, scenic seaside and hilltop towns, World Heritage sites, lakes, national parks and some of the wildest natural landscapes in the country that draw intrepid trekkers, climbers and mountaineers from all over Europe.

It should not be surprising that theÂ Black Sea's history was shaped by the nations that ruled the seas. AncientÂ Greece, the Roman Empire, the Byzantine Empire, Genoese, the Venetians and, until the early 20th century and afterwards Ottoman Empire, all put their cultural imprint on the region. They left behind castles overlooking the sea, churches, monasteries and mosques and distinctive architecture "“ much still intact or lovingly restored. Today, visiting Turkey's Black Sea by cruise ship (a number of lines based in North America offer itineraries that include one or two Turkish Black Sea ports) is one option but, for a more in-depth experience, travelers are advised to fly in to Samsun or Trabzon, two of the larger towns, from Istanbul or Ankara, and rent a car or four-wheel drive vehicle. Comfortable and friendly visitor accommodations are plentiful except in some of the more remote mountain villages.

Though the coastal areas are blessed with moderate temperatures year-round, weather in the mountainous interior can be colder; therefore springtime is the most popular season for exploring the mountains.

Traveling from west to east through theÂ Black SeaÂ region, a visitor might begin in Bolu. From coastal beaches to its famous multi-colored forests of oak, alder, pine, hazelnut and many more varieties of trees, visitors to Bolu can virtually travel through all four seasons of the year within the course of a short drive. Yedigoller orÂ SevenÂ Lakes National Park, is the centerpiece but explorers will also discoverÂ hot springs, hiking and walking opportunities and, in winter, one ofÂ Turkey's best ski centers.

As early as the 6th century BC, the coastal town ofÂ AmasraÂ went by the name of Sesamus, and today offers a number of historic attractions, including 14th century Genoese forts, a Roman bridge, Byzantine city walls and historic mosques. Nearby, along the sea, the fishing villages of Cide and Abana are popular excursions, particularly known for their seaside restaurants.

Just inland from Amasra is one of the region's best known attractions: Safranbolu. Its beautifully preserved and restored buildings from theÂ Ottoman Empire, including konaks, or mansions distinctively made of timber and stone, have earned the town a World Heritage Site designation. Other reasons to visit include the Koprulu Mehmet Pasa Mosque and the Kazdagi Mosque, Turkish baths,Â Shoemakers StreetÂ (the town once supplied the Turkish army with shoes) and the scenicÂ Market Street.

Also inland is the town ofÂ Kastamonu, with its 12th century castle, ethnographic and archaeology museums, and famous handicrafts, including fabrics, tablecloths, woolens and fruit jams. The expansive pastures in the vicinity offer some of the best trail riding inÂ TurkeyÂ and nearbyÂ IlgazÂ MountainÂ National ParkÂ is noted for its deer, foxes and bear as well as culinary traditions that include whole lamb cooked slowly in clay ovens.

Back on the Black Sea coast, the town ofÂ SamsunÂ is where Mustafa Kemal Ataturk drew up plans for what became the modernÂ TurkishÂ Republic; the hotel where he stayed honors him as theÂ GaziÂ Museum.Â SamsunÂ also offers an Archaeological andÂ EthnologicÂ Museum, with an impressive collection of antiquities and not far away, at Bafra, are excavations dating back to the Hittite Iron Age civilization. The thermal springs of Havza, approximately 50 miles away, are another popular day trip.

Continuing eastward,Â TrabzonÂ is the largest city in the region and a cruise port dating back to 7,000 B.C. It remains a major trading port, evolving from an early Greek colony to an important cultural center on the busyÂ Black Sea. Under the Venetians, the town became an important feature of the famousÂ Silk RouteÂ before the rule of Ottomans in 1461. Today's visitor will find historic churches and mosques as well as other landmarks, including a villa belonging to Ataturk on the town's periphery. Built by Maneul I in the 13th century,Â AyasofiaÂ ChurchÂ sits on top of a hill in the center of the city; the origins of theÂ ChurchÂ ofÂ Saint Eugenios, now the Yeni Cuma Mosque, are lost in the mists of time.

Just inland fromÂ TrabzonÂ is the Sumela Monastery, one of the true treasures of theÂ Black SeaÂ region. Begun in the 4thcentury by the Greek monks, Barnabas and Sophronius, and built high into the cliffs ofÂ Mt.Â Mela, the monastery has been restored and rebuilt over the centuries.

Not far away, the alpine region of Zigana in theÂ KalkanliÂ MountainsÂ is renowned for its natural beauty and popular for day trips. The extraordinary 3,200-feet high alpine lake at Uzungol is popular among campers, hikers and fishermen, who prize the lake's trout. Even more rugged is the Yusufeli designated conservation area inland from the Georgian border. This remote area of lakes and historic Georgian and Armenian churches offers an unforgettable white water rafting experience as well as ecotours on the famousÂ CoruhÂ River.

Offering more cultural comforts is the nearby town ofÂ Artvin, which is famous throughoutÂ TurkeyÂ for its many festivals celebrating regional cultures and featuring music, food, costumes, dancing and other traditional celebrations. The most popular is the Bull Fighting Festival. Visitors will also find other picturesque rural villages in the area as well as the Karagol-SaharaÂ National Park, which is noted for its forests and lakes.

Finally, visitors to the extraordinary Black Sea region will discover unique culinary traditions:Â Black SeaÂ cuisine, including the roots of the world-famous Turkish tea. Strongly influenced by geography and climate, mountains and sea, food featured in this region includes the black anchovy, or "hamsi," corn served in endlessly interesting ways, pickled green beans, an abundance of other vegetables and Akcabat Kofte (meatballs). Sweet helva, made with corn, butter and local honey, is another local favorite, as are, of course, a great variety ofÂ Black SeaÂ and river fish (including farm-raised trout), considered by many to be the tastiest in the world.

The Turkish tea industry is based in the town ofÂ RizeÂ in theÂ Black SeaÂ region where a moist moderate climate provides perfect growing conditions. While green tea is exported all over the world, travelers should be prepared to enjoy the local favorite, the strong, smoky black variety that, traditionally served with sugar, is as much a social event and opportunity for human interaction as it is a beverage. But tea is not the only appeal of Rize and its surroundings. Not far away are the dramaticÂ KackarÂ Mountains, with their waterfalls, highlands and peaks "“ magnets for hikers and climbers from around the world. Glacier lakes are adorned with yellow rhododendrons, found nowhere else inÂ Turkeyat these altitudes, andÂ Mt.Â KackarÂ itself, one of the world's ecological treasures, is home to bears, wolves, lynxes and mountain goats. 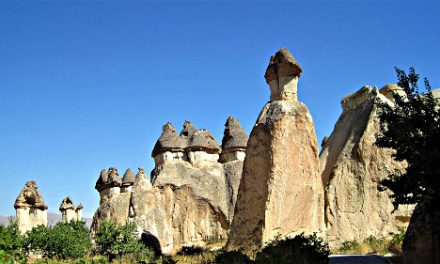