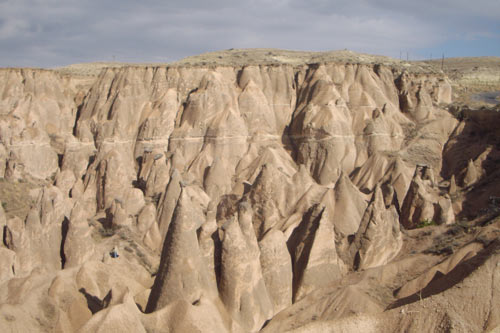 Believe me, there is a silver lining to just about anything. In this case it was the place where the bus broke down. I was on my way from Van in the extreme east of Turkey near the border with Iran back to Didim on the Aegean coast. As I love to do, I was travelling by coach, a hike of about 27 hours. Turkish coaches are very comfortable and many are the latest model Mercedes. So was this one.

What was absolutely exotic however were the passengers. No other foreigner in sight except me, loads of Turkish and Kurdish families and…their luggage. Safe for lifestock, they carried everything with them, bedding, sacks of flour, some p ieces of furniture, I kid you not. Everything was pushed and shoved into the hold, but, it appears that there was one bundle too many. 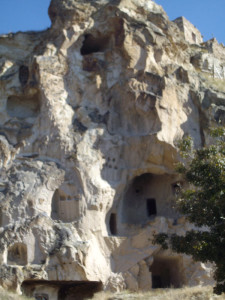 The road leads through steep mountains and, at one point, the modern Mercedes just packed it in and refused to go any further. We were stranded, near the city of Kayseri, in the middle of the night. A replacement bus was not available but a fleet of dolumus (Turkish minibus) took us to the central bus station. I knew that I was close to ÃœrgÃ¼p, a small town at the fringes of Cappadoccia. I hadn't planned to visit this time, but as I was there? What does the seasoned traveler do? Make the best of it and include another experience.

A bus was just leaving and I hopped on. By that time the sun was coming up and rose over the bizarre landscape. Wind, rain and time have shaped the volcanic stone of the region into incredible formations which begin just outside ÃœrgÃ¼p and go on for miles.

Many people like to view this wonder of nature from the air by going on a balloon ride. There are many companies in ÃœrgÃ¼p which offer the rides, one of them being Aladdin Balloons. It was too cold for me to try this and the first order of the day was to find accommodation. I had the good fortune to land in a quaint cave hotel, called ÃœrgÃ¼p Cave Inn. Only seven rooms, very comfortable and at 25 EUROS for a single per night with breakfast included a very good bargain. You can also go on hiking tours or even enjoy horseback riding at sunset.

The next day I went on a trip to see more 'mushrooms', caves and an open air museum as well as 12 small chapels and churches, all within the rocks. All I can say is this: the bus couldn't have broken down in a better place!