Venetians, Ottomans and Lepers on Kalidon

You can easily spend a week on the Greek island of Crete, go on a different trip each day and still only have scratched the surface because there is so much to do and see. According to Greek mythology, the infant Zeus was raised in a cave in Mount Ida, which is the highest mountain of the island and was sacred to the mother goddess Rhea. With all these gods around it's not surprising that I think about Crete as 'divine' because I could: indulge in visits to massive historical monuments from Minoan times to Venetian to the Ottomans, hike in the mountains, go on boat trips, chill out in modern day beach resorts, sample exquisite Cretan cuisine, go shopping in Heraklion and be amazed by no less than 25 million olive trees which account for the production of the world' finest extra virgin olive oil.

I could only stay two days and as I love boat trips, history and visiting places which are known for something unique, I decided that the tiny island of Kalidon, just off the peninsula of Spinalonga fitted the bill perfectly. 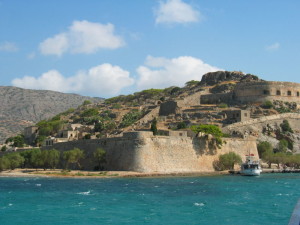 This tiny dot on the map was, strategically speaking, of huge importance to all the empires, which at one time ruled over Crete. For 400 years, it was the turn of the Venetians and they knew about fortresses which means visitors can see, visit and climb them all over the island.

One of the biggest fortresses found on Kalidon, which was also the first where the Venetians used special construction for the walls to resist gunpowder, which was the most modern weapon at the time, when came under attack from the Ottomans. The Venetians' devices worked so well that this fortress on this tiny island resisted 50 years of siege "“ from 1669 to 1715 until it finally had to surrender to the Turks. The island remained Turkish until the turn of the 20th century.

What makes the place even more special is the fact that from 1903 to 1957 it was a leper colony. The sufferers were shipped there with basic supplies, some medical care and not much more because fear of contamination ran high and not much was known about transmission. However, far from being despondent sufferers resigned to their fate, they were brave survivors who started creating their own community, workshops, hospitals, church, bakeries etc. and became self contained. It was an experience for me to wander through their now abandoned houses, to imagine their life as outcasts who nevertheless struggled to be as happy as possible under the circumstances until finally, in 1947 a cure was found and the last lepers were brought to Athens for treatment.

So, Kalidon is a symbol of resilience and bravery in the face of adversity from the Venetian fortresses to the houses of the lepers. If you are interested, read Victoria Hislop’s novel, The Island, which, although a work of fiction, contains a lot of valuable background information about the lepers and their lives.

The island is reached by boat from either Agia Nikolaos or Elounda in the North Eastern part of Crete.

Vancouver – A Visit to Grouse Mountain