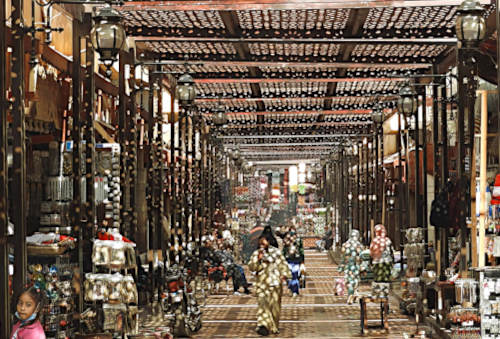 Don’t be afraid to walk through the local souks, or markets, when abroad!
@2021 Brooke Yool

The cross-hatched trellis drew me in to the Egyptian market area in front of me. Entering the wooden arch of the souk, I was engulfed in the banter of the storekeepers. I was immediately intimidated, averting my eyes from everyone other than my husband. I didn’t want to engage in rounds of haggling, so rather than studying the colorful souvenirs in front of each shop, I just gave each a passing glance, not wanting to appear interested in anything. I was disappointed in my choice, since it limited my full market experience.

A shop at the Luxor Souk. All shirts and clothes are handmade. Be ready to bargain! @2021 Brooke Yool

The warm winter sun shone brilliantly through the latticework roof, glinting off of tables of souvenirs and trinkets. I kept striding through the aisles at a steady pace, purposefully not making eye contact with storekeepers to avoid being sucked in for the best “bargain”. Shopkeepers persistently tried to lure in guests, using humorous lines such as “Magic flying carpet! Try before you buy!”

Just a moment later, my husband spotted a t-shirt store on the main drag of the souk, ahead on the next corner. He loves souvenir t-shirts, and he couldn’t help but drag us into the shop. I immediately froze, concerned not only about price negotiation, but also afraid of being convinced into a “deal” in which we’d suddenly own a suitcase full of t-shirts.

Mahmoud, the shop owner, was a slight gentleman who spoke reasonable English and had a warm smile. We immediately felt welcomed. His walls were stacked floor-to-ceiling with rows of t-shirts in all colors and sizes. And, as is common for Egypt, he had a kettle and tea set tucked in a corner on a table. He started unfolding shirts to show us the variety of prints and styles, almost rushing to make sure that my husband found exactly the shirt that he wanted. When my husband decided on one with hieroglyphics, Mahmoud paused and told us to wait. Then, he dashed out of the front door of the shop for a few moments.

My husband and I stood there puzzled, as we were alone in Mahmoud’s shop. (And if someone came by wanting to buy a shirt?) Shortly thereafter he returned, his small hands full of a variety of shirts. It ends up that the decals on all of his hieroglyphic shirts were poorer quality, so he went to a few neighboring shops to gather some better ones. He allowed us to feel the distinct difference between the two, whereas the original decal felt like it would peel off in a few washes.

But, despite the opportunity to buy a higher-quality shirt, Mahmoud’s price quote did not increase. Since it’s part of the local tradition, we did haggle with him for a bit, but it felt more like a local game than a bidding war. And in the end, my husband received two very nice souvenir t-shirts for much less than what he’d pay here in the United States.

My husband Bruce with shop owner Mahmoud (on the left). We had a wonderful locals’ experience chatting with him! @2021 Brooke Yool

Further, once negotiations were complete, the rich experience was not. Mahmoud insisted that we have a seat, and he pulled up a small table for us that we could all share tea together. The three of us sipped tea and chatted for a while, surrounded by rainbow stripes of folded shirts on the walls, discussing tourism, business, and the world. Sadly, no one else entered his store while we were there, and Mahmoud told us that it had been very slow in recent months.

I wondered how many prospective t-shirt, or other souvenir, buyers were put off by the idea of price gouging at the souk, just as I had been. While I’m sure that there were bound to be some dishonest storekeepers through the market, Mahmoud served as proof that honest storekeepers exist in the souk. If it hadn’t been for my husband and his crazy t-shirt obsession, I would have never had such a rich personal connection in the Luxor souk.

Finding the Mandrills in Gabon, Africa 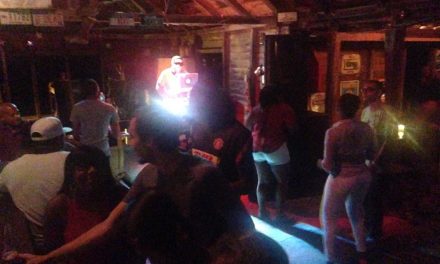