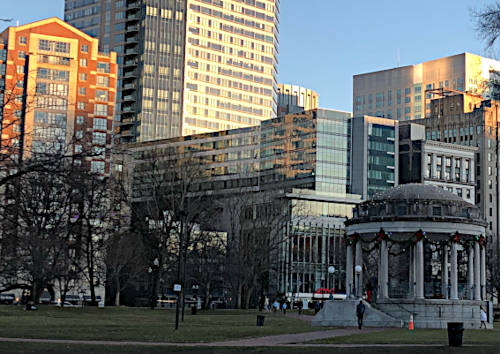 A view of Boston from the Boston Common ©2021 Susmita Sengupta

But I was here with my daughter for an entirely different reason. On this particular visit to Boston she and I decided to visit a garden sculpture celebrating one of her favorite children’s books. I was here to see ducklings.

In 1941, Robert McCloskey wrote and illustrated a children’s book about a pair of mallard ducks and their search for an ideal location in and around Boston to raise their brood of ducklings. At first they like the Boston Public Garden and its little lake with an island but after Mr. Mallard is almost run over by a bicycle, Mrs. Mallard decides that this was no place to raise baby ducks.

They fly around the neighborhood surrounding the garden and ultimately fly out to the meandering Charles River and settle on a spot near the water. Mrs. Mallard lays eight eggs and they hatch into ducklings named Jack, Kack, Lack, Mack, Nack, Ouack, Pack and Quack.

Mr. Mallard then wants to discover the rest of the river and asks Mrs. Mallard to meet him at the Public Garden in a week. The book then beautifully details her journey back to the garden with her eight ducklings.
Robert McCloskey was awarded the Caldecott Medal of 1942, the most prestigious children’s picture book prize given to illustrators by the Association for Library Services to Children. For me, the lithograph illustrations done by McCloskey in sepia toned charcoal are still a joy to behold, bringing alive the Boston city scenery as one sees it from a duck’s viewpoint.

I decided to begin our book related tour at scenic Charles River, whose banks had served as the nest for Mr. and Mrs. Mallard. The gorgeously winding river flanked by leafy paths, a grassy esplanade and bridges provided innumerable settings for stunning views of the Boston cityscape and of neighboring Cambridge across the river.

Standing on the Anderson Bridge, one of many bridges across the Charles, I watched people kayaking and Harvard rowing students practicing their craft. But surprisingly I did not see any ducks.

Going on to Boston

The Boston Public Garden was our next destination and my daughter and I headed to Harvard Square transit station to board a Red Line train to Boston. After running underground for a few stations, the train emerged into light and I saw we were on a bridge over the Charles. The view was mesmerizing as the waters glistened under the bright sunlight and the Boston skyline came into sight.

My daughter and I exited at Downtown Crossing station in the midst of a prime shopping area. I could not resist the urge to visit two not oft visited Boston Landmarks in the vicinity.

The Boston Opera House and the Paramount Theatre

The Boston Opera House which functioned as a movie theater for more than fifty years was built in 1928 by Thomas White Lamb, considered to be the foremost theater architect of that era. He was the designer of numerous cinemas and theaters around the US and Canada including the United Palace Theater and the Ziegfeld in New York City and to my utmost surprise I discovered that he designed a cinema each in Mumbai and Kolkata in India, each of which is now a heritage building.

The opera house facade with its blink and you can miss entry is truly deceiving as I learnt once I stepped inside. In the ornate marble lobby built in French and Italian styles, I found myself transfixed by the grandeur of the incredible ornamentation, plaster work and gold leaf finishes, all restored to perfection.

The Paramount Theatre next door, built in 1932 has a classic Art Deco style with a beautiful facade and a 7000 bulb marquee sign. After staying in disrepair for years on end, the theatre was painstakingly restored to its former glory and today the towering sign with its red, blue and gold lights provides a vibrant backdrop to the pulsating, shopping neighborhood.

A Walk Through Boston Common

Now it was time to get back on track and reach our ultimate destination like the duck family. But once again I digressed, deciding to do a quick walk through Boston’s most famous park. The entrance into Boston Common was a few minutes walk away. America’s first public park with a 350 year old history, Boston Common is particularly famous as the site for many events related to the American Revolution. Fittingly, it is the starting point of the Freedom Trail of Boston, a walk through sixteen important sites of American history.
The park forms a part of the Emerald Necklace, an interconnected link of beautifully manicured green spaces covering more than 1100 acres designed by the visionary landscape architect, Frederick Law Olmsted.

I walked across the park past lovely rolling hills, ballparks, memorials, statues, monuments and grassy fields dotted with locals and tourists enjoying the midday sun on this wintry day. Atop a sylvan knoll towered the Soldiers and Sailors Monument, an imposing edifice commemorating Massachusetts soldiers and sailors who lost their lives in the U. S. Civil War.

Into Boston Public Garden, Home of the Ducklings

From the Common it was easy to wander into Boston Public Garden, a formal gem in the Emerald Necklace, located just across the street. Dating back to 1837, it is an amalgamation of bridges, gardens, walkways, a pond with swan boats and an island in mid pond, both of which play an important role in the duckling story.

In the book, McCloskey writes how Mr. and Mrs. Mallard see an enormous, strange looking bird pushing a boat filled with people who throw peanuts in the water for the Mallards to eat. I would have loved to take a ride on the iconic swan boats but it being mid winter, the boats were parked.

About the Duck Sculpture

My daughter and I proceeded to see the “Make Way for Ducklings” sculpture, erected in the park in 1987. The sculptures are the handiwork of Nancy Schon, a sculptor known for making bronze statues. Mrs. Mallard and her eight ducklings in bronze, are set atop a cobblestoned path in the garden and I was amused to see the ducks wearing little woolen hats. I learnt that they are usually dressed for the seasons, festivals and events of national importance.

The sculpture is spread across 35 feet showing mommy duck heading the march followed by her eight ducklings, each of them with a cutely different expression. The space radiated joy as I observed visitors, young and old alike stopping to admire the statues, click pictures and even climb on the backs of the adorable ducks ( the ducks being much larger than life size).

Following the Path of Mommy Duck and her Ducklings

In the story, the ducks flew over “Beacon Hill and round the State House and looked at Louisburg Square”. Mrs. Mallard and her ducklings waddled across Beacon Street before entering the garden and my daughter and I decided to take a peek at these places.

Beacon Hill is a historic neighborhood, stately and picturesque, with rows of Victorian and Federal style houses. The expensive locality with its gaslit lamps, red brick sidewalks and many cobblestone streets is on the U.S. National Register of Historic Places. I looked at the houses on Beacon Street, the windows decked with Christmas wreaths and thought of the exquisite illustrations in the book.

Louisburg Square, an affluent private neighborhood modeled after typical London residential squares in the Beacon Hill district is made of about thirty Greek Revival row houses dating back to the 1840s and has had many famous residents such as Louisa May Alcott, the Vanderbilt’s and the Kennedy’s.

And I noticed the final building that was a part of the story. The Massachusetts State House loomed in the distance, its golden dome shimmering in the ebbing glow of sunset. It was designed by architect Charles Bullfinch, who had tremendous influence in shaping the look of Beacon Hill in the 18th century.

This trip, while being about ducklings, also gave me a marvelous insight into the rich historical architecture of Boston.

Travel to Macau, Not as Bad as You Might Think