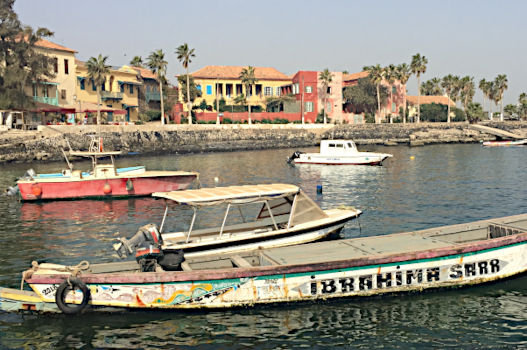 Fishing boats sat calmly on the water to the right of Goree harbor, along the curving shoreline @2021 Annie Elle

When I was in Dakar for a work meeting, I had the chance to take a cultural excursion with my colleagues and the natural choice was Ile Gorée. As a small island just 3.5 km from the mainland, it had been used as a hub for the competing European powers during the booming transatlantic slave trade between the 16th and 19th centuries.

From the harbor, I shuffled ahead of the group with my paper ticket in hand to wait in a large hanger for the boat to transport passengers over. I immediately climbed up the stairs to the top level of our boat to get a prime view of the island. After a short, calm ride, the boat pulled up to the island, even visible with the naked eye from Dakar’s mainland. I followed the stream of people down a long harbor, peering to the right where a curving beachline has a number of smaller wooden boats docked and young kids played on the sand.

A row of shops greets new visitors, and as a jewelry-lover, I immediately spotted a set of rings made from local ebony. The island has no cars, so the group behind me dispersed and passing by a giant art installation of a red heart on my left, I made my way inwards. I knew the most popular point was a straight shot from the harbor, the Maison des Enclaves – “the Slave House”.

Entering the smaller streets with brick walls on either side, wooden shutters with ivy growing up and over them, I couldn’t help but admire the beauty of the colorful streets accented with colonial architecture. I knew the island had served as the perfect prison – after all, the water was too deep for the slaves who primarily couldn’t swim, and the location of the island was perfectly situated for the transfer from the African continent to the Americans going west across the Atlantic.

The cobbled streets led me to a large statue on my left of a man and woman, standing atop a huge drum, literally – and metaphorically- breaking free of their slave chains. The entrance to the Slave House was just beside the statue, and I found another crowd gathering around a guide about to begin his next tour in English. I filed past the large wooden doors, edging myself inwards to get a glimpse of the clay red structure which wrapped left and right with curving staircases that led up to a second floor.

The guide explained that UNESCO had declared the ‘house’ a World Heritage site in 1978, and that its history went back to 1536 when the Portuguese started utilizing the site as their warehouse for beeswax, grains, and other goods, but most importantly, slaves. Until 1848, when the French illegalized slavery in Senegal, the structure saw tens of thousands of slaves, chained with five-kilo weights, stored in the small, cold rooms before their permanent departure. It had been a museum since the 1960s. I moved towards the darkened chambers, ducking my head beneath the low walls and glanced inside. The walls were smooth and unmarked, and the main pathway led straight out to a curved door where I could see the sea just beyond.

This was the infamous Door of No Return, where years ago, countless numbers of slaves last touched their home continent, never to see it again. The view had changed considerably, from the dark shores with haunting memories of what the door represented, to old fishermen’s boats floating peacefully just beneath the door, with colorful bands painted on the wooden strips.

I gave the others a turn at the door, as I excused myself to see the rest of the island. Back in the narrow streets, watching my footsteps around the uneven stones, I reveled in the quiet of a car-less area. With just over 1,000 locals living there, I could feel the tranquility and safety of the area around every turn, taking in the bright doors and windows. Occasional tourist shops popped up between local homes, since this wasn’t the main strip for visitors.

I happened upon a small stall where I watched as two artists mixed sand and pebbles of different colors. My French was rusty, but eventually the men managed to communicate that they had gathered the different materials from various parts of the island and Dakar. The pastel colors were in a wooden box, divided into squares, much like a large medicinal plastic container for weekly doses to be organized. There were a variety of tools for sifting through the rocks and sand, for grinding them into smaller pieces and adhesives for sticking them to the paper. Behind the two men, a row of art pieces were hung up with the African silhouette in shades of brown and grey, or women carrying water and goods on their head.

After thanking them for their patience and explanation, I made my way towards the main pathway which wound up to the highest point of the island. Along the windy footpath, the larger tourist shops touted hangers packed tightly together with bright dresses in local fabric and keychains in straw baskets. The winding uphill walkway had varying art paintings and quilts, strung up between trees on the inner side of the coil, or hooked up to the wall on the outside side.

Stray cats slinked between the canvas pieces and sewn African dolls with headdresses, unbothered by the haggling that locals on plastic chairs engaged in with foreigners of all backgrounds. I couldn’t resist but attempt a few myself, particularly over some beautiful artwork that had African stick figures with baobab trees in the background and other figures pounding fufu, a classic West African staple.

At the very top, a large, open space was interspersed with trees growing up and out around crumbling stone and short walls. I spotted a vendor holding the captive interest of a group of 7 Asian tourists, circled around him as he told a story about the island from his ancestors’ point of view. At the far edges, I could see out towards the mainland in one direction, with large boats interrupting the smooth horizon. A white tower, punctuated with holes, was erect like a sail, and a row of local homes had thin sheets as their doors, flapping in the ocean breeze.

I headed back downwards, stopping just once for a fresh orange juice at a cafe hidden beneath a hill, sheltered behind the rock. The line to get back on the boats was packed, as sunburned tourists and day-tripping locals poured onto the harbor. As I turned to get one last look at Goree, I reflected on how much the island has been through and the journey of its evolution from a dark, tragic blight in Senegalese history to the remarkable beauty it proudly holds now for visitors from all over the world.

On Hope Street in Liverpool, England