Columbia River- a view west from its dry inland course towards Mt. Hood, Portland, and the Pacific ©2019 Jim Chamberlain

It is only 80 miles long but contains over 100 waterfalls. Eleven of these are over 100 feet high with the 620-foot drop of Multnomah Falls as the most famous and accessible. The vertical basalt walls of the gorge go from sea level to nearly 4000 feet. The Columbia river winds westward through the Cascade Range forming the boundary between the states of Washington and Oregon. The western end is a temperate rain forest that gets nearly a hundred inches of rain a year to just ten inches falling on the eastern grasslands. It is designated a National Scenic Area which contains both scenic and man-made wonders other than waterfalls like Beacon Rock, Mt. Hood, Vista House, the Bonneville Dam and the Bridge of the Gods.

Humans have used the gorge for thousands of years. Ciello Falls near the Dalles was a popular fishing site for Native Americans. Lewis and Clark travelled the gorge on their way to the Pacific. Pioneers on the Oregon Trail used the river to traverse the Cascades by converting their wagons into rafts. They must have been amazed at the diversity, beauty and power of this river.

All eight types of waterfalls can be found within the gorge. Nearly 90 of these are on the Oregon side. This is due to the steeper basalt cliffs that were carved by the ancient Missoula Floods that washed away the softer rocks and sentiments of the river channel. The Washington side has fewer waterfalls due to its slope and less vertical drops than the southern shore.

The best way to see several waterfalls as well as take in scenic views of the gorge in a short distance is to travel from Portland along Interstate 84 to Crown Point. I drove the narrow and scenic byway of the Historic Columbia River Highway 100, also called U.S. Route 30, as it climbed to my first stop at the Women's Forum Park at Chanticleer Point. I got a wonderful view to the east of Vista House, the Gorge with the Columbia flowing below. A short distance further and you arrive at the Vista House itself for another wonderful view. The roadway narrows as its winds down the hill from Crown Point to the first waterfall.

Latourell Falls sits in a spectacular basalt canyon. The water plunges 249 feet amid emerald green foliage with yellow lichens clinging to the black canyon walls. The short walk from the parking area led me towards the sound of the roaring water. The floor of the canyon seemed almost like a lost world where extinct creatures could appear at any time. Spectacular.

Shepard's Dell (35-60 ft.), Bridal Veil (160 ft.) and Wakeena falls (242 ft.) are all worthy of visits as they display Plunge, Horsetail, Tier and Fan types of waterfalls. But the most spectacular and easiest to see is Multnomah Falls.

The water plunges in two tiers 620 ft. past the old stone Benson Bridge that seems to divide the waterfall in half. Native American stories say the falls were created for a princess who wanted a hidden place to bathe. I could see the top portion of the falls from the highway but the short walk to the viewpoint allows you to see both tiers. The top tier is 550 foot and the bottom only 70 feet. I did not stop to visit the Multnomah Falls Lodge which was built in 1925 out of every type of rock found in the gorge. It houses a gift shop and restaurant for those needing a souvenir or a cool drink. While it would be difficult to see sites grander than these falls, I continued my journey eastward.

Two miles from Multnomah Falls is the Oneonta Gorge. Here are four waterfalls with the largest being Oneonta Falls. However. to get to the falls a mile long hike thru a steep gorge, a climb over a logjam and wading thru waist deep ice cold water is required. I decided on the roadside waterfall called Horsetail. It is another mile past Oneonta Gorge and only requires you to cross the two-lane roadway from the parking area to see it.

I passed the John B. Yeon Park and the trail to the 200 foot, Elowah Falls. Unfortunately. the trail has been closed since the Eagle Creek Fire in 2017 did extensive damage to the area. My next stop was the Latourell Falls.

I hiked thru the emerald green forest for about a mile when I began to hear the telltale roar of a waterfall. The trail descends into a small canyon where the water drops thru a rocky cleft, 70 feet to the stream bed. This area is more remote than others but has the same feeling of being ancient and timeless. This the last of the waterfalls on the Oregon side. The Bonneville Dam is close-by and another man-made marvel, The Bridge of the Gods spans the might Columbia allowing access to the Washington side. Two other less impressive bridges at Hood River and The Dalles provide more access points to the north shore of the Columbia.

I crossed at The Dalles and went a few more miles east on Washington Highway 14 to Wishram. Here is a wide-open view of the eastern gorge with Mt. Hood in the distance. The land here is dry brown grassland not the lush forest of the western section. This is wine country and small wineries are all over this area inviting you to stop in and taste their vintages. There are waterfalls here too, about a dozen but most are not as easy to access as on the Oregon side. 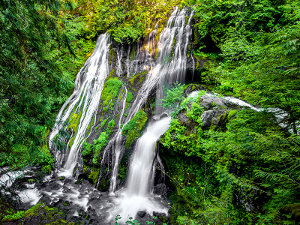 A hidden gem called Panther Creek Falls lies 15 miles north of Carson deep in the Gifford Pinchot National Forest. There are no signs to the falls, but I found Panther Creek Road and stayed on it for about 8 miles to a large gravel pullout. I found a lovely segmented waterfall just 100 yards away hidden among the trees. Another waterfall in the Wind River area is Falls Creek Falls which is another 10 miles further north. It is a triple tiered waterfall with good flow in the spring.

I drove west on Highway 14 and just past Stephenson is one of the largest monoliths in the world. Beacon Rock juts 848 feet into the sky. Lewis and Clark stopped here in 1805. The state park has a trail that leads in just over a mile to Hardy Falls and a short distance further on to Rodney Falls. The waterfalls are plunge type between 80 and 90 feet tall. Two waterfalls on one trail makes the hike worthwhile.

My waterfall adventure along the Columbia River Gorge came to an end as I climbed above the river to Cape Horn for a last view of the mighty Columbia and its ancient gorge that is a waterfall wonderland. 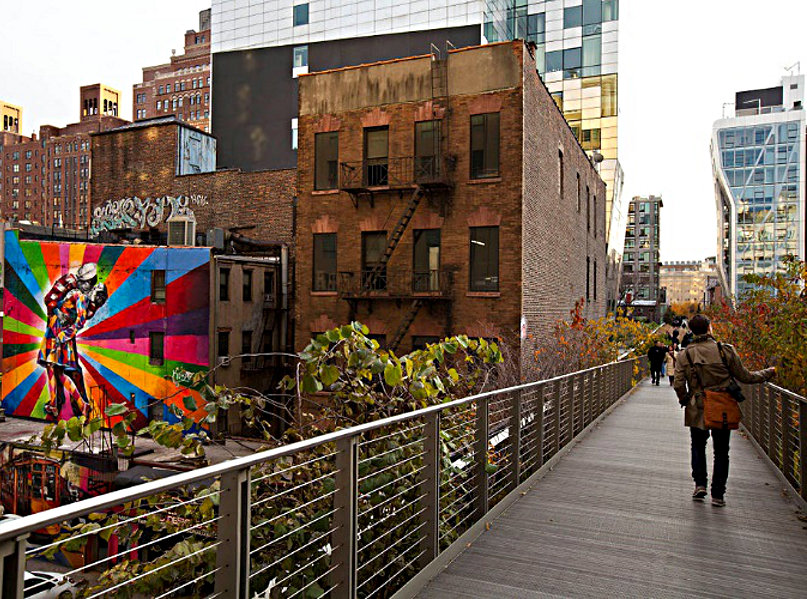