Wednesday- After a long day of waiting in a dust bowl city and being fed nothing but crap from NazcaÂ´s best salesmen, on an empty stomach, I finally fasten my seat belt in a four man plane. The pilot starts the propellers and informs myself and the other two passengers that we will see the mysterious figures at the tip of his wing. As we roll down the runway I begin to wonder what possessed me to do such a thing, but soon we are in the air. The plane barrels right and my mind is dizzied as the pilot points out an ancient whale etched in the sand. We barrel left to see strange geometric shapes. Flying over red desert hills he points out the Â¨astronautÂ¨ who has his arm up, so I wave. We go on like this, rolling left and then right, about twelve times, and my mind is dizzied by the movement and riddle of the lines. Why did the Nazca people make giant glyphs that they could never see from the ground? As we round the humming bird, a figure seen from space the pilot informs, I marvel at itÂ´s wingspan and beauty.

For more on Peru 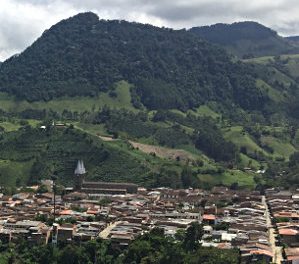