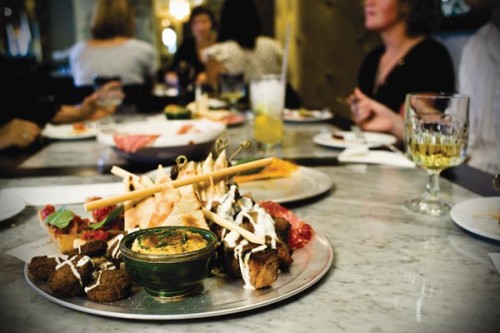 The world's most successful travel information provider raves about the "small city with a big reputation", which it promises will "blow the cobwebs away" with its trail of "art-house cinemas, funky boutiques, hip bars, live-music venues and lashings of restaurants".

Positively Wellington Tourism General Manager Marketing Sarah Meikle says it's fantastic to see Lonely Planet pick up on the city's continuously developing flavour.
"Wellington really prides itself by always adding to its offer. Lonely Planet has tracked Wellington's coming of an age as a destination from a city on the rise in 2007 to the 'coolest little capital in the world' in 2011. It's great to see them recognise that as well as the creative and cultural capital, Wellington is also emerging as a global player in culinary tourism."

"Wellington has a gut-busting number of great cafes and restaurants; bring trousers with an elasticated waistband," it advises.

"There's a bewildering array of options in a very small area, and keen competition keeps standards high and prices reasonable."

The cocktail- and caffeine-fuelled hospitality scene "fizzes and pop", while the craft beer capital's "burgeoning local brewing scene and more beer bars than you can lob a hop at" also earn a well-deserved mention. The recent opening of Le Cordon Bleu cookery school "puts some icing on Wellington's culinary cake, bolstering its status as a bona fide gastronomic destination", the guide states.

While the nickname 'Windy Welly' is justly deserved, Lonely Planet notes Wellington's climate is in fact largely pleasant, with the nearby Kapiti Coast and Wairarapa enjoying even better weather.

Speaking of the city's neighbour's, Kapiti Coast is lauded for its "wide, crowd-free beaches", while Martinborough is hailed "the sweetest visitor spot in the Wairarapa" and Greytown the "most seductive of several small towns".

The guide says while travellers have long been passing through the crossing point between the North and South islands, attractions such as Te Papa and Zealandia now stop visitors in their tracks.

"A couple of days' pause will reveal myriad other attractions, including a beautiful harbour and walkable waterfront, hillsides clad in pretty weatherboard houses, ample inner-city surprises, and some of the freshest city air on the planet."

Five authors and more than 26 weeks of combined on-the-road research contributed to the 16th edition of Lonely Planet New Zealand "“ the world's bestselling guide to the country.

Strangers in the Night