Standing miles above sea level, at such an incredible altitude, my gaze is directed past the camera to the striking curve of the Earth. At this point, the air is thin and each step I take is in the direction of less oxygen available than the last "“ alone, closer to the Sun than most humans on the planet. In this moment I was 14,120 feet tall standing on a mountain.

Travel is a personal hobby of mine. Also, I'm not shy when an opportunity to hike may arise. I was fortunate enough to have the opportunity to travel to Colorado Springs, CO a few months ago. I knew for a fact I would hike the entirety of Pikes Peak; this adventure held many treasures that resulted in personal and emotional growth. 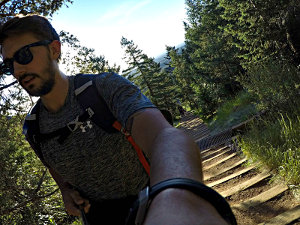 Before beginning the actual trail-head of Pikes Peak: there's a staircase made of wooden steps gaining in 2,000 ft of elevation from the base, with some points at a nearly a 60-degree angle, that guided me to the trail which in return, would lead me to the summit of Pikes Peak. This almost-one-mile staircase on the mountain is known as The Manitou Incline. It's really a gut-check to see if my desire to finish the mountain matches my drive to finish the mountain. Fortunately, I witnessed others from around the world travel to Colorado just for the experience of climbing these stairs alone which brought joy as I'm seeing others appreciate the mountain too. However, I wanted to experience everything the mountain had to offer and made the arduous trip up this highland staircase one step at a time. I began the steps at 7:00am and completed by 8:00am.

Of course, after walking on a staircase of nearly a mile at elevation, my lungs and legs were toast. Doesn't matter. There is no stopping to reach the goal "“ which is to summit the mountain before 4:00pm. The reasoning for an increased pace is there was an expected storm arriving near 4:00pm and being above timberline bids an increased risk of lighting strike. Pikes Peak has a reputation of being a giant, lighting rod and unfortunately the trek has claimed lives previously because of this fact. Reaching the peak in a timely fashion was paramount, enjoying the scenic route and participating in the lessons the mountain had to offer took a near second.

I spent the next eight hours hiking alone. True peace and silence surrounded me. When I say alone, I mean… alone. Being a few hours deep into the march and miles into the wild, if I stopped walking and held my breath for a second the only sound heard for miles is my own heartbeat. The description does not do the instant justice of true silence and solitude. Irony exudes from the moment as how can one feel so remote surrounded by so much untouched life? Certainly, it's humbling to accept that I'm all I have in terms of support in the moment, but also empowering. The key is to not let anxiety or dread creep up but rather, look within to rise to the occasion and engage it. I often take a second from time-to-time to appreciate this feeling.

As I wandered higher on the mountain and nearer to my goal, the elements began to shift from the temperature of 60-degrees Fahrenheit at the base, to a chillier 25-degrees near the peak. Also, flurries of snow had begun to share themselves through the route; which complemented the already feet of ice I was required to walk on through the trail quite well. All of which increased in severity once I passed the timberline. 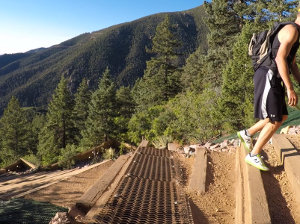 Generally, trees will not grow above the point known as "timber line" because of the harsh conditions: cold, wind, and lack of moisture. Many popular mountains have shelters set up near the point of timber line to ensure hikers have a safe place to descend to in case of rapid changes in weather that pose life threatening conditions. However, once you pass the point of timber line and the weather changes on you, the odds of you making back to the shelter unscathed in a timely manner is slim. So, with caution, monitor the conditions, and make the decision to commit to the ascent above timber line.

By 3:00pm I had reached the summit. Truly one of the most rewarding moments I have experienced. There was no one to complete it for me, no one else to motivate or push me, and no one to double check my moves. An experience that I set out to understand all on my own and in return, I solidified my own resolve that I have the capability to accomplish any task.

In moments of pushing through unaided struggle, true growth is the result.

Justin Cran is a Florida based writer, coach, and adventure seeker. As a proud supporter of Destination Roulette, an approach to life, Justin shares personal experience on www.motivatedtraveler.com which encourage others to shape their own path in life "“ a path of adventure. As a lover of travel, Justin can be found swimming with sharks in Belize, hiking in the mountains of Colorado, exploring the city life of Berlin, and anywhere in between. Safe travels and Justin will see you there.

Views of the Miami River