ITKT fans can expect a whole lot of Japan in the coming weeks as I have just returned from tour that included Chiba, Kanagawa, Saitama and Tokyo. The trip was a bit of a whirlwind but mostly reminded me how much I love visiting Japan. Moreover, I visited Japan as part of a group that included another ITKT writer, Jenny Block (she can bee seen here opening a can of whoop-ass against a Kisarazu geisha in a festive round of Rock, Scissors, Paper. She will have several Japan-based stories as well. So yes, lots of Japan and Japanese customs in weeks to come.

Because I have found Japan so different, but inviting, I wanted to help demystify Japanese culture a little for future travelers — at least a little. I started this with Mysteries Revealed: Bowing in Japan, but realized there is so much more to explore.

However, before we begin, here are some of the basics:
Japan is about the same size as California that is 65% mountains and forest with a population of 127,000,000 people squeezed into rest of the usable, flat land. Tokyo has about 12 million people but the immediate outlining area has about another 30 million, hence the incredible towers and multi-level freeways that fill the Tokyo skyline. This information alone, offers some good insight into Japanese culture. With so many people moving, needing shelter and food, it makes sense why I found efficiency to be a key factor in much of what I saw in Japan 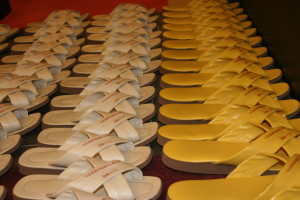 Language
I have been told that Japanese is an easy language to learn because it has a relatively small vocabulary, it is phonetic and all words end in vowels or “n.” However, Japan uses three sets of alphabets. One alphabet uses 47 Japanese characters for original Japanese words. English is used for non-Japanese originated words like computer and email (This helps as many signs and street names are all have some English on them). Chinese is also used. In speaking, there are several variations of “polite” speech, ten words that all mean “I,” a vague grammar system and word gender attributions. I say all this to let you know. Visitors will not quickly pick up language. I suggest learning the basic pleasantries and use them often: good morning, thank you, nice to meet you.

Step 1: Leave your shoes at the door
Most entrances to restaurants, temples, homes and some traditional hotels will require you to take off your shoes. If you are wondering when this is supposed to happen, it will be obvious. Most places will have even rows of one-size-fits-all slippers (which will never fit) waiting for you to scoot around in and a small entry way with some racks for shoes. My advice, consider loafers and clean socks.