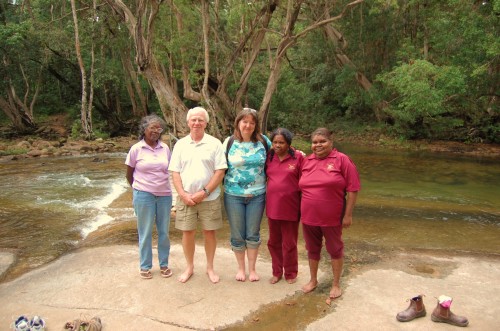 Just about to cross the Murray River over the mossy rocks. Marcie and Grace, (in red tops), tucked all our shoes in their pants to make the crossing.

The three stout Aboriginal women stood in the dusty dirt drive, their deeply-featured faces squinting in the late-day sun. They put themselves in a straight line "“ I spied them adjusting each other like children lining up in school "“ waiting for us to go down the line and say our good-byes. Marcie, the gracious one, held out gifts "“ coffee mugs and tote bags with their community's Jumbun logo "“ as we dispersed. A sweet and glorious day it was with the carefully tutored Australian Aborigines. We got to know one another over the course of this day, so when Marcie handed me the token gifts, we hugged tightly and lingered. No cursory hug, this. We pulled close. 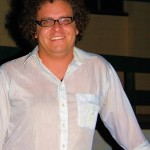 My visit to the Jumbun Community of Queensland was the most valuable, memorable experience while traversing the grand continent of Australia. Will Hyams, a PHD candidate in the tourism program at James Cook University helped connect me with the Jumbun community for our day-long adventure on their rainforest walking track. Will worked hand-in-hand with the Jumbun community to further tourism and had also been instrumental in implementing their tours. The eco-tours would serve as an immersion into Aboriginal past traditions by way of a rainforest hike on which chosen Aborigines, after learning the manual, delineated their history of survival as well as imparting their dreamy tenets. 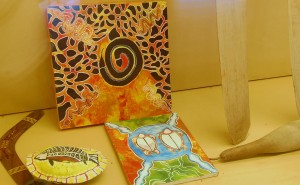 The Keeping Place where artifacts are displayed

We began our day, the one that would end up with gifts from Marcie, by traveling to the Jumbun community on the Cassowary Coast in Will's open Jeep down dusty back roads, off the Bruce Highway outside Tully, to the Murray Upper. Meeting our Aboriginal hosts started off a bit clumsily but I'll cut them some slack because my companion and I were the first people ever to take the tour. We were soon escorted through their "Keeping Place," where nicely exhibited artifacts were displayed, and we were off to the rainforest. Piling into vehicles, we headed out to Moombay Campsite along the Murray River. The sparse site has a rich cultural significance for storytelling and as a campsite for the Old People.

"The bridge isn't built yet, so we'll walk across the river here," Marcie told us and we obediently removed our shoes and socks. Then holding hands we went in a shaky single-file sideways line, stepping delicately on slippery moss-covered rocks as the shallow water of the Murray chilled our feet and ankles. The Aborigine ladies were so worried we'd fall that they would have carried us across if they could. As it was, they insisted upon carrying our shoes. They tucked shoes into the waistbands of their pants, looking so ridiculous we had a hard time balancing from our laughter.

Once across the river, we set out on an adventure into the past. The story unfolded as we hiked through the bucolic rainforest surroundings.

The Australian Aborigines are the oldest group on Earth with a cultural history, going back 65,000 years. Dreamtimes is a term which refers to a time when ancient ancestors flew across the heavens, creating life in all its forms on the land. Dreaming Stories convey the past to future generations and can be performed in dance, paintings, song, or storytelling. Our imaginations were set aflame by a tale involving a V-shaped rock formation near Murray Falls. An ancient archer used the V-shaped rocks as his viewfinder to shoot a kangaroo, which then turned the animal into a constellation. Hearing the whimsical story while Murray Falls provided music and mist in the background cemented this day in my memory forever. 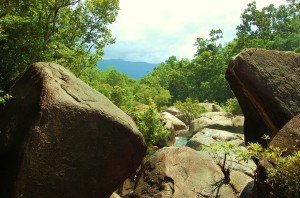 The V-shaped rock formation. Murray Falls is directly behind us, pounding and misting.

How could this one-day eco-tour be so valuable? The answer dwells in the soul of the Aborigines. Their basic beliefs "“ borne from lifetimes of baking under the outback sun, in concert with howling winds and otherworldly rock formations "“ are replete with psychedelic visions. Australian Aborigines come from a very different past than the rest of us. Their ethos embraces shape-shifting, worldly elements that breathe, and spirit gods among us. 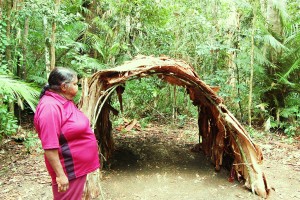 Margie standing by a sleeping hut

As the day wound down, I was sorry for it to end. We had laughed and hiked, listened and sensed, mixing theirs and ours into an allegory for life. Knowing that such a people exist makes me feel good wherever I am on the planet. I was honored to join Marcie, Grace and Elizabeth on our tour "“ our introduction "“ into the nature-infused wild world of the Australian Aborigines. 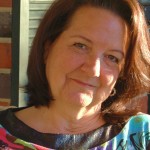 Josie Schneider is an international house sitter and freelance writer. She blogs about house sitting, travel, good food and wine at: http://www.housesittingtravel.com Her trip to Australia in 2008 sparked a travel bug that hasn't stopped since meeting the Aboriginal people of Australia. 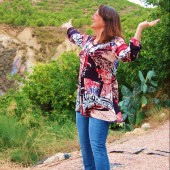 Josie is on â€œPhase 59" of her life. The first 58 were all about raising a family, operating several businesses in design and clothing manufacturing, and then divorce and remarriage. Now she roams the planet house sitting and writing. The house sitting allows freedom to explore a community in depth and time to write magazine articles and novels.