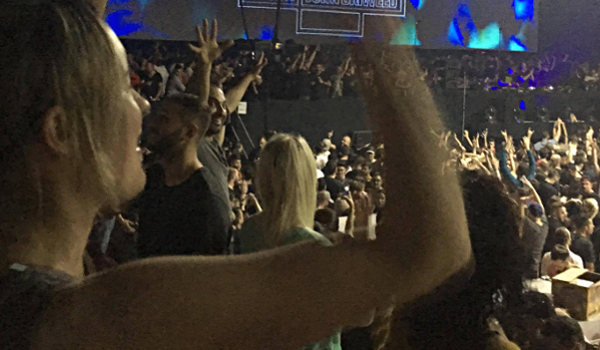 My first trip to Bucharest, twenty years after the end of Communism, and I'm among few tourists on streets that feel a tad threatening. Now, a decade later, I'm stunned to find Romania's capital as inviting and 'happening' as any Western European city. Indeed the reason for my latest trip is to see two of my favourite DJs (British) play an exclusive set together here.
After what is a massive gig (Romanians sure know how to party!), I set about getting an overview of the city via a free walking tour. I see one of Romania's oldest restaurants, Caru' cu Bere (The Beer Cart); the bust of Vlad the Impaler amongst the ruins of his medieval court, historic arcades Pasajul Vilacrosse and Pasajul Macca lined with Parisian-style cafes; street art; and several sites pertaining to the 1989 Revolution that overthrew an incredibly brutal dictatorship.

A Conference room in the People’s Palace ©2019 Angela Lapham

Communist Legacy: 'Palace of the People'

The last place you expect to find the world's second largest administration building (after the Pentagon) is a small, developing nation. Yet that is precisely what Communism created in Romania.

For Romania's President, Nicolae Ceceascu (1965-89), the 1100 room palace was the embodiment of a fully developed socialist society, and he inflicted severe food and power shortages on the Romanian people in order to build it. I can't get over how big it is. Even more shocking are the excesses inside "“ marble staircases and 2800 chandeliers. Nowhere better illustrates the dangers of totalitarianism.

Of course, the Ceceascus didn't sacrifice their lifestyle to finance the Palace or to live in principle with the Communist ideal of equality. I tour the mansion they kept secret all those years. There we're led through elaborate dining and lounge rooms; gold encrusted bathrooms; a huge theatre room; bar; beauty spa; indoor swimming pool and garden; and even wardrobes still full of their clothes!

I'm surprised to see a bright, sparkly mosaic of animals frolicking in the sun. It's not something you associate with evil dictators! Book at least 24 hrs ahead: Located in a wealthy, pretty neighbourhood, the mansion is less than 20 minutes' walk from the largest park in Bucharest…

By one entrance stands a recently erected statue of Charles de Gaulle; by another, the Arc de Triomphe, built between the World Wars when Bucharest was known as 'Little Paris.' I love how Eastern European parks always have so much going on: this one has botanic gardens, statues of famous Romanian and international writers including Shakespeare and Victor Hugo, a memorial dedicated to Michael Jackson (!), restaurants, cheap bike hire, boat rides, mini-golf, concerts and theatre performances during summer, and the open-air 'Dimitrie Gusti National Village Museum' showcasing traditional Romanian village life.

From the park you can also see the only building in Bucharest to feature the Soviet Hammer & Sickle and Red Star. Modelled on the famous Lomonosov Moscow State University, it brought together all of Bucharest's press and publishing houses.

Mamaliga on the grill CC 2.0 Nicubunu

French influence is also reflected in the Art Deco apartments and buildings that sprang up in the 1930s. I'm ecstatic when I chance upon several in the city centre on or around str. BatiÈ™tei. The most spectacular of which is the ArCub Theatre (nr. 14, behind the Intercontinental Hotel) built between 1932 and 1934 as a recreational and meeting venue. Another striking example is the former headquarters of the national telephone company located on Calea Victoriei (next to the Novotel Hotel. I'm shown this on the walking tour).

Bucharest has all the chain stores found in Western Europe, within its ten shopping malls. I make a Communist history experience out of this Capitalism by visiting Bucuresti Mall, a grain storage facility under Communism.

I try the national dish of Romania, 'Mamaliga', which is polenta shaped into a cake. One time I have it with roasted gourmet vegetables; another time, dipped in a traditional bean soup.
Sampling Romania's chocolate brand, 'Heidi,' is another priority. So many varieties. The dark chocolate range is vegan and gets as exotic as brazil nut, lime & passionfruit!

The World’s Most Beautiful Bookshops are in Bucharest

Amidst an era of bookshop closures, it's exciting that Romania launched the successful bookshop chain, CÄƒrtureÈ™ti, in 2003. Boasting numerous stores, the ones to see are CÄƒrtureÈ™ti Carusel (Strada Lipscani 55) and CÄƒrtureÈ™ti Verona (Strada Pictor Arthur Verona 13-15).

Carusel occupies an elegant, six-floor, restored 19th century building and has a cafe on its top floor serving food that includes raw vegan cake, and a basement selling records, CDs, and board games.

Verona is in a beautiful, historic house with bean bags to sit on and a room labelled ROD (standing for ROmanian Design) containing cool clothing, jewellery and other stuff made by local designers. Both stores sell a huge selection of books as well as library bags, shirts with author quotes, and other book-related novelties.

Opening its doors in 2012, the new National Library is very flash and somewhat akin to a shopping mall. It's got escalators, glass lifts, shiny floors, and artworks that move. A gallery-sized space displays an exhibition of art from all over Europe, and a history exhibition documents Communism in Romania.

I tell a librarian how impressed I am. She just hopes the government will spend as much money on making it a functional library behind the scenes.

Thanking me for stopping to talk to her, she says I share her approach to traveling: 'To get to know a country, you need to meet its people!'. 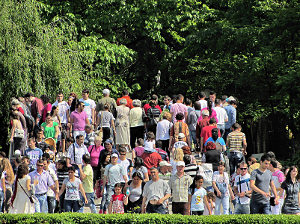 On Sundays, Bucharester’s love to go to the park and have a quiet, stateful, refreshing, leisurely walk far away from the madding crowd. CC 2.0 Alexandru Panoiu

Speaking of which… Few places in the world have I met so many strangers that offer to show me around or invite me to stay with them; and when I ask for directions, accompany me the entire way to my destination!

Nothing captures this generosity more than when I ask a couple whether I'm walking in the right direction for Bucharest's 'Ghencea Cemetery.' The guy confirms I am but that I'd have to take a bus. This left from the very bus stop he was standing at. I thank him, concede I may or may not go (I wasn't sure I was that interested in seeing the Ceceascus' graves!), and leave the bus stop.

A minute or so later I hear someone running up behind me. It's him! Handing me a 5 lei note, he says: 'This will give you about three bus trips; I really want you to see this cemetery!'
I cannot believe it.

The bonus of all these encounters, of course, is getting to talk to the locals. I learn about Romanian traditions; childhoods spent in villages; what it's like to work and study in Bucharest; and the problems besetting Romania "“ from corruption in politics, business and medicine to the neglect of rural Romanians in recent socioeconomic development initiatives. Thus while I remain excited about Bucharest's transformation, one thing's for sure: 'To get to know a country…'

Bucharest is well-connected by bus, train and plane (including several budget airlines) to Western and Eastern Europe and Dubai/Qatar.

Well-furnished inner-city apartments with all the mod-cons average 21 euro a night. A bed in a Hostel dorm with excellent reviews averages 6 "“ 8 euro.

Self-caterers will find supermarkets stocked with innovative Romanian products, including health-conscious and vegan lines, as well as popular brands from all over the EU.

Angela is a Melbourne-based librarian and history graduate fascinated with Eastern Europe and different cultures and histories in general. Every few years it's time to take off to Europe for another lengthy adventure!