Think before you shoot.
If you'd like to capture a scene where everything is in focus a higher number aperture setting is what's required. Usually for a landscape or any scene where you decide everything is important in the composition, go with an aperture of f/9, f/11, f/16 or higher. 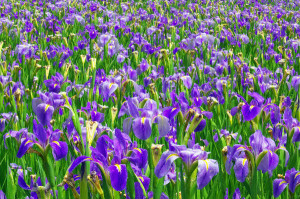 The Iris field photo was taken with my Panasonic set at f/11 because I wanted to display the entire patch of flowers. Had I wanted to isolate and focus on only one plant and blur the rest, I'd have used a setting such as f/2.8.

The photo of the bird in a field was captured much differently. The scenery wasn't that attractive and I wanted the bird to stand out from the background. F/6.7 was the widest aperture available on the Sigma 50-500mm lens I had attached to my Pentax when I zoomed to its maximum length in order to capture the rascal. This blurred the background enough to make the bird stand out as the subject. 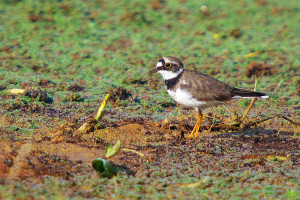 Some other factors to consider.
The distance you are from your subject has an impact on DOF. The farther you are away from the scene, the more depth of field you can create.
Focal length has an impact on the scene, as well. A wide angle lens gives you a greater Depth of Field than a zoom or telephoto lens. Zooming-in, as I did in the bird photo creates a narrower Depth of Field and increases distortion in the background.

Put yourself in charge of your camera.
Play around with aperture settings. Try a few shots at maximum, middle and narrowest aperture and at various distances from your target. You probably won't notice the difference until you pull the photos up on your monitor. But, when you do, you'll notice a dramatic difference. You can make yourself the Master and RULE OVER YOUR SUBJECTS. Until next time; Happy Shooting!