Scorching the Tootsies in China! 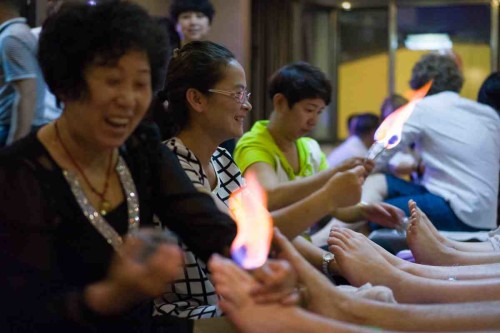 A Different Kind of Massage

I once associated massage with relaxation "“ the smell of sandalwood incense; meditative sitar music; healing hands kneading tension away.

However like most things I encountered during my time in China, my experience at Green Willow Bay massage parlour was unlike anything I expected. 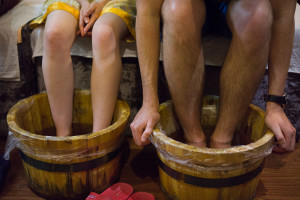 Silly me. After three days in Baotou, I should have learnt not to make assumptions. Inner Mongolia's berserk city had found ways to unnerve me from the second I entered its smoggy domain. Noodles and chicken feet cluttered the breakfast tables; honking vehicles zipped around in a chaotic onslaught of near misses; firecrackers burst into the sky in the middle of pedestrianized streets.

So, why should this massage have done anything less than shock me?

When our group arrived at the parlour, the staff decided there were too many of us to fit in one room. Naturally, the solution was to drag furniture across the wooden floor, noisily pushing the massage beds together so that we could all sit together.

Once happy that they had crammed us all in, the masseuses entered, heavy wooden buckets of water sloshing in their arms.

'This is to bathe your feet,' my Chinese friend explained. 'I've told them to make the water less hot than usual for you. Chinese people normally have it at boiling temperatures.'

If that water was cooled down, I can only presume that the buckets normally arrive bubbling. We bathed our feet for around ten minutes, by which time I was only just starting to overlook the throbbing of my poached feet. 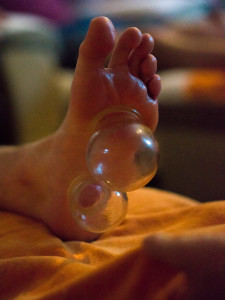 Bunched in a line, the masseuses began to oil their hands. Our reactions to the contact that followed were a mix of ticklish squeals, surprised exclamations and yelps of pain.
Each practitioner's technique varied. Some favored toe pulling; some seemed to take great joy in cracking bones; some liked to wiggle ankles about. The man massaging me appeared to enjoy lodging his thumbs deep into pressure points, eliciting an alphabet of expletives. This only seemed to encourage him and I'm almost certain he started doing it harder.

Don't get me wrong "“ this wasn't an unpleasant experience. I admit the ambience wasn't quite what I'd expect from a massage parlour. Instead of contemplative tranquillity, there was a television game show playing over in the corner. Giggling clients and staff walked into the room to take photos of the Westerners throughout, and at one point two dogs charged in "“ one fluffy poodle and one scraggy brown mutt. The mutt started trying to hump the poodle. They fought. They ran out again.

Still, no complaints. The massage provided welcome respite from Baotou's incessant assault on the senses.

But my hopes to leave feeling relaxed went up in smoke when the parlor suddenly took on the feel of the city's manic restaurant kitchens. I looked up in confusion to see my masseuse brandishing a flaming torch.

He had an unsettling glint in his eye as he took a glass cup and pushed the flame inside. With an orange wisp still trapped within the glass vessel, he placed the cup forcefully down on the sole of my foot before pulling it free with a loud suction pop. 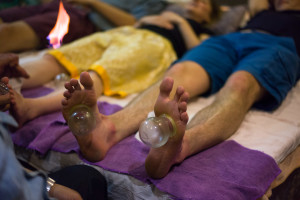 Fire cupping has been a popular healing practice in China for thousands of years. The flame heats up the air in the cup and, once removed, the contraction creates a partial vacuum. The resulting suction can be used to stimulate acupuncture points, bringing blood to the surface of the skin. Chinese people believe this improves circulation and increases the body's wellness.

Nonetheless, I can't say watching a trapped flame being pressed onto your skin promotes a settled feeling – though I was surprised to discover that when the cups made contact, they did not feel particularly hot. The suction was far more evident, making the sensation comparable to receiving a love bite from a large blowfish.

We walked back through Baotou's busy streets that night laughing. Overall, the experience had edged closer to distressing than de-stressing. But hey, what's life without a little fire?

Written and photography by Sophie Deal 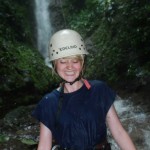 Sophie Deal is a writer and cartoonist from Wales, UK. She works as a copywriter for a global brand, but enjoys running off to explore the world whenever she can. Follow her adventures on Twitter – @sophiedeal

Altira Hotel, My Kind of Digs