Dune Bashing in Dubai "“ adventure for the spirited

It looked, for a moment, like a mirage gone mad. There on the rolling sand dunes were scores of misshapen four-wheelers racing up and down, kicking up clouds of sand as they went. The first thought that leapt to my mind was that a pack of daredevil circus stuntmen had been let loose in the desert. Nope. This wasn't a mirage. I was 30 minutes out of Dubai and there, with their throttles revved up, were the dune-bashers pelting across the desert in their dune buggies. 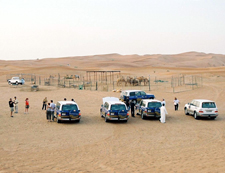 Dune bashing is often called the 'white water rafting of the desert' and it's a very popular sport in the United Arab Emirates (UAE). Don't get worried by the name. Dune bashing isn't some bizarre violent activity, but a serious adventure sport, which involves driving flashy cars/bikes/ buggies into the open desert and having some serious fun climbing up and down the mountain-sized sand dunes. Of course getting stuck and extricating a buggie is also an adventure.

Since I was new to the activity, I decided to take the soft option "“ dune bashing with a powerful 250cc buggy and then going for a full-fledged desert drive in a chauffeured Toyota Land Cruiser. Travelers are driven into the desert and taken on an exhilarating ride up and down sand dunes in 4×4 vehicles, mostly powerful Toyotas or Pajeros.

My dune-bashing expedition began when I was picked up by a Lebanese desert guide-cum-driver in a ultra-luxury, powerful Toyota Landcruiser from the centre of Dubai city. It was about a half-hour drive from the glittering skyscraper city of Dubai to the sandy expanses of Hatta.

As I exited Dubai, I could see a towering range of rocky and sandy mountains of Hajar far away with their pitted and ravaged sides. The Hatta sand dunes, believed to be remnants of an ancient sea, which had once washed over the Emirates, are located just outside Dubai and most dune-bashing tours take off from here.

I was given a two-hour break to jump on the buggies and race up and down over the dunes. A dune buggy is a 4X4 vehicle which has a motorcycle saddle and handlebar. Driving a buggy on soft sands can be very tricky and just sheer power isn't enough to ensure an exciting and fun dune bashing outing. 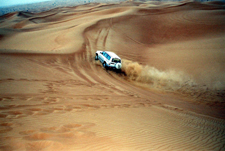 There's no getting away from the fact that a dune buggy is an odd looking vehicle. It's built like a scooter but it has four wheels with fat tires. And it roars through the desert sending up clouds of sand as it goes. Caravans of buggies ridden by dune-bashing enthusiasts followed by a jeep are a common sight on the dunes around Hatta. From where we were standing in Hatta, we could see scores of buggies and cars tearing around the sand dunes in what seemed like suicidal escapades.

But after a few minutes of watching, I was itching to try my hand at it. I took off on the 250cc buggy heading for the nearest dune. But it is easier said than done. Not knowing how to negotiate the lip of the dune, I took a toss and landed in the soft sand. After a few more debacles, I got the hang of bashing the dunes without getting bashed into the sand. Going up and down the dunes, raising columns and clouds of sand was an exhilarating experience.

Soon it was time to get back into the Land Cruiser and experience a real desert drive. Our Lebanese driver-cum-guide bundled us in the vehicle and took off into the undulating stretches of sand dunes. Soon the undulations increased as we went over what looked like large sand mountains. The ride became more choppy and felt almost as if we were sailing in a stormy sea and not driving. As our Land Cruiser heaved and plunged up and down the crests and troughs of the dunes, our driver cheerfully warned us that it'd get worse. Were we okay and were we game for more? Of course.

After a short break and when all the Land Cruisers had let out air from their tires, we started off on our actual adventure through the dunes. The sand dunes rise for as high as 30m-40m, and some were even higher. The powerful vehicle climbed up the sand dune slowly, slipping here and there on the side of the sand pyramid. The windscreen framed a rising slope of sand; we were pushed back into our seats as if we were in an aircraft soaring into the sky. 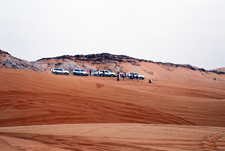 That first climb was not an easy ride, but it was certainly thrilling and had our adrenaline pumping. And as we reached the knife-edge crest of the dune, we began to plunge down the other side. Heading straight down at breakneck speed, skidding on the sand I had that sinking feeling in the pits of my stomachs. In places where the sand was too soft, the vehicle went sideways, tilting at an angle, sometimes to the left, sometimes to the right. At times, it appeared as if the vehicle would just topple over on its side… but my driver was an expert with over 10 years of experience and he skillfully steered the Land Cruiser through the dunes.

After a two-hour rough-and-tumble ride, we reached a craggy patch of rock in the middle of the desert. The fleet of five Land Cruisers stopped for a view of the crimson desert sunset. The view was simply amazing and as the sun turned from golden to crimson red to soothing orange, it was a soul-soothing experience.

The caravan of vehicles was ready once again to continue bashing the dunes till nightfall. We continued to bash in the dusk and finally reached the well-lit up desert camp, equipped with piercing lights, blaring Arabian music and stalls where we could photograph ourselves in traditional costumes (kandura for men and burkha for women).

Also, there were plenty of desert delicacies made of dates, dry fruits and honey along with a heady mix of alcoholic cocktails and fruit cocktails. Later as the night passed, I stretched out on carpets and cushions on a round wooden floor resting and enjoying the cool desert breeze. Soon a belly dancer came on stage and entertained while a hookah aka shisha with scented tobacco was passed around, making me feel like royals enjoying the naach-gana by the dancing girls. 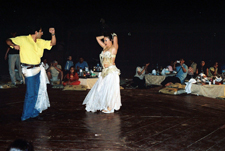