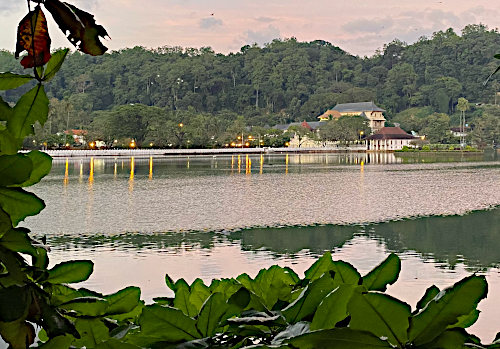 Kandy, long considered the cultural capital of Sri Lanka, is a 3-hour train ride from the largest city, Colombo, and was my first destination after arriving from the airport. At the station, right under the iconic Lotus Tower in the capital city, I watched locals pay 140 LKR ($0.70 USD) for their third class tickets while a line of other foreigners and I were charged the visitors’ fee of 250 LKR ($1.25 USD).

The ride was breathtaking, as we swooped around tea plantations and coconut trees providing shelter from the tropical sun. The third-class trains also let passengers stand by the open doors between carriages or sit with legs dangling off the steps, which was a literal breath of fresh air after a long flight. Finally, we pulled in and I clawed my way through the eager taxi and tuk-tuk drivers awaiting fresh tourists at the entrance towards a site visible for miles around – the Bahirawakanda Vihara temple with an enormous Buddha statue atop a hill overlooking the city and neighboring villages.

The temples required all visitors to remove their shoes, hats, and never turn our backs to the Buddha statues @2022 Annie Elle

With no signs to be found anywhere, luckily, all I had to do to find the path was ask a local resident, forming a large belly shape with my two hands and say, “Big Buddha?” They wordlessly immediately pointed up the winding, paved roads, nodding their heads with a small smile on their lips. It was impossible to resist pausing a few times to watch the cricket matches with college-age students tumbling and running about in all-white uniforms down below.

Finally, bright flags strung everywhere signaled the entrance nearing, and I soon learned the significance of the colorful design. The blue strip stands for the spirit of universal compassion, the yellow represents the teachings of the Buddha and the red symbolizes wisdom and fortune. The white strip is purity and timelessness, the orange represents the wisdom of the Buddha and the final strip is all of those colors together.

At the entrance, a booth had visitor and guest prices listed, and the guard peered his head out of the window to inspect the length of my dress. He gestured to my bare shoulders, “Here, OK but there, you cover.” Prepared for this, I pulled my long blue scarf out of my bag and tied it around my waist, strategically covering the slits. I looked back up at him, and he gave me a silent nod of approval and handed me a yellow paper ticket.

A few steps later, a small sign asked all visitors to leave their shoes with an elderly man in a small, wooden storage room. A booth next to it, with a young girl eyeing me curiously, sold offerings, flower wreaths, and incense for 20 LKR per box ($0.10 USD) with various scents. I padded barefoot up the steps and emerged at an open, flat platform where a warm breeze blew at the edges of my scarf-turned-wrap. Local couples perched on the white barriers, some leaning on one another and others with eyes closed in unified prayer to the Buddha.

The faint smell of incense wafted across the open space as I grinned at the families posing for group pictures. Just beyond the white, arched wall, I glimpsed a garden with fruit and vegetable trees and a small pond at the bottom of a flight of stairs from the platform. As I stood underneath the archway at the head of stairs, wondering if the bell hanging overhead would be a loud clang or a muted ding, a group of monks, clad in bright orange robes covering one shoulder and draped down to their ankles, emerged with a long ladder and a curved machete.

Working as a team, they took turns lowering the ladder down to the garden below. Wading through the thick bushes carefully and yanking their robes out of the branches, they passed the ladder towards what I realized was a very full coconut tree. One climbed up the ladder to whack down a bushel, and the others light-heartedly teased him for dropping the heavy, water-filled coconuts the second the branch was cut free.

I made my way around a little shop with Buddhist scripts of wisdom and elephant paintings for sale before I found the stairs leading up to the different platforms of the Buddha statue. Following the steep, narrow flights of stairs, and flattening myself against one side to make room for other visitors coming down, I found myself at the top level where I could see all around Kandy from the back of the Buddha’s head. I was breathing in the fresh breeze, flowing around the statue and onto the platform where a handful of other locals and I were taking in the sights when suddenly, a loud boom went off very close by. A cluster of birds scattered in the air, and I saw a handful of other tourists also jump at the abrupt noise. I wheeled to the back, where I searched for a cannon of some kind or car accident but didn’t see anything before I heard the second boom.

Finally, I descended the stairs, keeping an eye peeled for anything unusual, and some sudden movement by a banner-wrapped-tree in the courtyard grabbed my attention. I paused for a moment, and realized a colony of macaque monkeys were gathering closer to the ground. I quickly hurried down to the bottom to get a better look, and immediately understood why they were coming down from the tree. The elder monks were tossing leftover bread and some plain biscuits onto the tin rooftops for them. I couldn’t help but think that one bald elder, with a bright yellow, pointed N95 mask and the orange robe, resembled a tropical bird among the rays of sunshine streaming through the trees.

The female macaques, with bright red faces, more aggressively snatched up the food while the babies timidly waited until a piece was thrown near them. The younger monks, boys who must have been no older than 10 years old, beckoned me over. One handed me a triangular pouch, and pointed at the monkey, “Danger!” It clicked in my mind what the booming sounds were just as he mimed a throwing action on the ground. I chuckled as I watched the two generations of monks, the older ones peacefully feeding the monkeys their remaining morsels, while the younger ones threw explosives to keep them at bay.

The balmy 32° C sun and breeze carried me back down the hill towards Kandy Lake. Tamil and Sinhalese signs posted along the walkway asked people not to disturb the wildlife, and I took care to walk cautiously around the Muscovy ducks with red bumps on their face. I spotted turtles soaking in the warmth, a long Asian water monitor resting at the edge in the mud, and several trees blanketed with white cranes. As sunset neared, the sky filled with black crows loudly cawing, mixed in flight with bats, fighting for their dinner of insects.

I rounded the corner to the Kandyan Cultural Center where the daily traditional dance show would be held. A few of the local workers were selling tickets to two other tourist couples, and I walked up to reserve my seat. The amphitheater was semi-indoors, two stories, and the first 5 rows quickly filled up with foreigners. The show’s programs, detailing the 11 or 12 different shows, were impressively varied in the languages they offered with a color-coded system. The Czech Republic had dark green programs, Korean was light green, and Russian was in white, to name a few.

The dances flowed smoothly from one to the next, with some including women holding baskets as part of their tribute to the harvest and others that had acrobatic men showing off their backflipping abilities. The grand finale had fire-breathers walking over flaming coals on the ground in front of the stage. The main fire dancer even encouraged the spectators to try it, although no one dared. As the flames licked our faces, I instinctively took a step back, simultaneously laughing at the courage and shaking my head in disbelief at their bold dance-walk over the red-hot coals.