Istanbul has just been declared one of three cultural capitals of Europe, so I think another story about this glorious city is in order. It’s also a story about what happens if you don’t do your homework properly. Then again, the greatest pleasure of travel are surprises.

I heard about the Flower Passage or Cicek Pasaji in Istanbul’s Beyoglu District. I love anything that’s colorful and smells good and, naturally, I assumed a Flower Passage would be a sort of flower market, something like the Spice Bazaar or the Grand Bazaar. I didn’t consult a guide book, just found out how to get there and went. 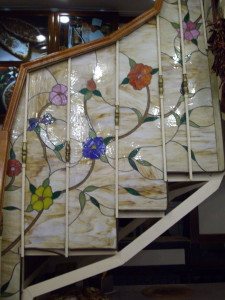 Surprise, surprise, not a flower in sight! The Flower Passage is an L-shaped building with a colorful history. It has been erected on the site which originally housed the wooden Naum Theatre and Opera house, which was destroyed in the great fire of 1870.

In it’s place the city fathers decided to construct a European style building which had posh shops on the ground floor and expensive apartments and offices on the top floor. It was then called Cite de Pera. Legend has it, that some of the shops did indeed sell flowers and another version is, that noble Russian baronesses who fled from the Revolution tried to make a living in Istanbul by selling flowers. That’s apparently how the name came about.

After a period of glamor, the place and the district deteriorated, the shops turned into raucous watering holes for workmen, pimps and musicians and acquired a decidedly bohemian atmosphere.

In 1980, disaster which somehow seems to be attached to the place, struck again. All of a sudden, a great part of the building just collapsed and it was closed.

Fortunately the aforementioned city fathers remembered what an art deco treasure the Cite de Pera was. The Flower Passage was restored and reopened and today has yet again fabulous fish restaurants and bars on the ground floor. Luckily, many windows and part of the art deco facade have survived the collapse and there are stained glass flowers to be admired everywhere.

So, in the end, I did find the flowers I was looking for, and although they don’t smell, they are a delight for the eyes.

My Last Day in South America