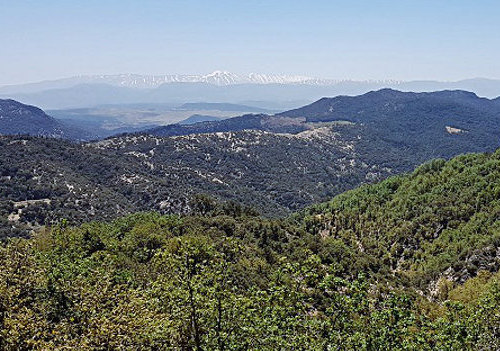 "STOP! No! Wait wait wait! Shit! Walk away from there now!!!" My friend froze. She looked confused at me as I panicked. The longer she stood still, the more I panicked.

I wasn't sure, but that really looked like a scorpion. A hands length from my friend's hiking boot and now it was getting closer. I wasn't sure. It looked soft. I had never seen a soft scorpion before. It was pretty light-colored too, and I was in the middle of the forest. Do scorpions even live in the forest?

With some nerve-wracking hand movements and more useless words spitting out of my mouth my friend finally saw the creature and walked a step forward, away from that poison-filled light brown soft-looking thing that most definitely had a scorpion's tail pointing forward.

As I calmed down, I leaned forward to take a closer look at the creature. It sure was a scorpion. I wanted to touch it just to check if it was really soft, but I resisted it as it didn't look very pleasant to get that tail penetrated through the skin of my finger. God knows what would have happened.

Hilltop views as far as you can see, Tazekka National Park ©2020 Linn Haglund

I was hours away from people. Truth is, I had only seen a young shepherd hanging out with his herd on the whole hike, and he was gone when we came back passed the same spot.
This was Tazekka National Park. Morocco off the beaten path.

Most tourists venture to the desert and the bustling cities of Marrakesh, Meknes, Fez, and Casablanca. Or they walk the blue city of Chefchaouen taking selfies for their Instagram on every doorstep they pass without giving it a thought that actual people live there.

But very few travelers make it to Tazekka National Park. The contrasts of lush, thick forest and serene lakes beneath the stunning Jbel Tazekka mountain which towers 1980 meters above makes this natural area home to a wide variety of wildlife. Among them, the Barbary Deer which was formerly extinct in Morocco before a few animals were transported from Tunisia in 1994. Other wildlife found in the park are Barbary wild boar, Golden Jackal, North African hedgehog, crested porcupine, otter, and numerous bird species.

With all the wildlife I was hoping to see, I met a sole scorpion. A soft-looking light brown scorpion. But the forested area I had hiked through was lush and alive. I walked along the sparkling river that ran along most of the path, getting shadow from old sage trees covered in gray moss. Some parts, I walked 100's of meters above it but I could still hear the strength of the water below me so I knew we were still following the stream.

The last bit of the hike, from where I had spotted the scorpion and back to the car, followed a path that was completely covered in leaves. So much I couldn't understand how I found the path the first time around. So much that I got lost. Luckily, I had my friend in tow. I looked at her, she looked at me, with no idea where to step next. I must admit I was a wee bit worried more scorpions would hide under the leaves and get into my shoes, but luckily, I wasn't in the middle of a horror movie.

Which Way is Out of Tazekka?

What should worry me, was that I couldn't find the path back. Thousands of leaves were covering the ground in front of me and there was no indication of where I had come from. After walking in different directions, I followed a path that clearly wasn't the right one. Then this path divided into two and I walked in another wrong direction. Finally, I got enough signals on my GPS to figure out we were close enough to the road that I knew which direction to walk, path or no path. Whether I would end up on one or the other side of where I had parked the car was another question.

Sweaty, with moss and leaves in my hair (and even an unfortunate spider), I came to an opening. I recognized the mountains in front of me and the GPS told me I was very close to the road. After a relieved snack break and checking some of my first photos of the hike to figure out more or less where I was compared to the mountains when I started the walk, I ventured straight out to a new trail closely followed by my friend. A trail that led me straight to the car. Right next to the actual path I had walked on the same morning. Pretty happy not to sleep in the forest that night!

After a slow drive through the winding, narrow roads stopping every now and then to photograph the surrounding valleys and mountains in the golden light of the late evening sun, my car rolled down towards the guest house as the sun disappeared behind the mountain. The still lake behind the low building, reflecting the surrounding mountains was also a reflection of my state of mind after a day of adventure. I was happy to nestle up inside with a glass of wine waiting for another incredible vegan Tagine served by friendly Moroccans.

Although a bit difficult to find, the Relais De Tahla Sarl guest house is beautifully situated by a lake. The staff is super friendly and the food’s from another world! It was pretty affordable too. I will go there again and recommend it warmly.

Linn Haglund is originally from Norway, but has been living in southern Spain during the last 5+ years. She has a long history of traveling and living abroad. This made her aware of all the negatives tourism can cause to a destination and she started to become more conscious of her footprints while she travels. To help others explore this planet in a responsible way, she founded the travel blog brainybackpackers .

Searching for Che in Argentina