I’ve become a bit tired of getting charged five dollars, at least, on every transaction I enter into on the ATMs out here.Â  Well, I haven’t used them that much yet, but I will get tired of them very soon.Â  So off to the Banco Republica de Uruguay I went today.Â  I went to open up a bank account.

I walked into the bank at 1:15 PM, fifteen minutes after it apparently opened for the day. Is that normal here? Interesting, but I guess that runs along the lines of a late-time-orientation society so I bought it without too much thinking. I then walked into a large, white waiting room with what must have been 35 people holding tickets waiting for their number to be called. 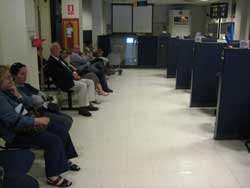 I had walked into the Uruguayan Bank’s world of a DMV office, or so it felt. Grabbing my ticket
to wait my turn, I then sat down in front of teller’s #4 and #5 – a man and a woman, respectively. About ten minutes went by and no movements to wrap things up were made…I started to focus in on the convo’s to figure out what was going on.

The #4 teller was actually talking football with the client while he (painfully) used his right index finger alone to type into the keyboard. At #5 the deal had actually been accomplished; the teller and patron were dramatically shaking hands like they were long lost friends (both extending their left hands as well as the right to form the union). But they continued to do this for awhile, and then the teller got to her paperwork and didn’t receive any other clients.

Long story short – it took me the entire afternoon to get to the teller and have them tell me that I didn’t have everything I needed to open an account on the spot. Sweet. But I wasn’t frustrated – it was brilliant people-watching time, and allowed me to learn more about the people of this city. They are in no particular rush, they act warmly with each other, and they (possibly) fake being busy at work when they are really just pushing papers around. At least that is my take so far…

Museum of Anthropology Spreads its Wings

A Peak in Provence, France IV

Travel to Macau, Not as Bad as You Might Think