‘Mai aur samajhti hoon, uske baad bolti hoon.‘ I understand more than I speak. It’s a line I use when I’ve been present with Hindi speakers and listening to their conversation without adding to it, and always elicits great reactions.

I surprise many people in this way: anyone can learn a language, but I definitely don’t look as though I should be able to speak Hindi. Until I open my mouth, I look like every other tourist in India, except that I’m a little better at crossing the road. 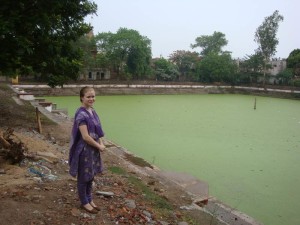 I speak Hindi because I lived in Varanasi before coming to Mumbai. In Varanasi, almost every long-term foreigner speaks some Hindi, because it’s the spoken language there. I was working with people who never had chances to attend school, let alone learn English, so it was up to me to learn the local language.

For me, life in India is only as it is because I can speak Hindi. It definitely makes everything easier, but also allows for much deeper and more interesting relationships with people. It makes me a bit of a novelty amongst Indians: friends love to surprise their other acquaintances with me, first talking about me in Hindi and then cluing the others in to the fact that I’m listening. Rickshaw walas turn around in disbelief when I ask how much to pay, or if we could make a pit stop at the ATM. Most importantly, speaking Hindi allows me to have closer connections with the underprivileged kids and women I work with — that’s why I chose to learn it in the first place.