Ones: One God, but this is debatable, depending on the point of view and faith. One child, a kid that is only a cement bag with legs coming out at the bottom. He walks slowly up a hill. The wind pulls through the pastic and he sways, almost falls, too slight to fight. His fingers curl around the edge of the cement bag and he pulls it tighter around his body to avoid the sideways rain.

Some things come in twos, like idli sambar. Two idlis and two spoons. More sambar or chutney will come if you put your hand up.

Monsoon shoes: a pair made of plastic, with holes in them that allow water to flow out.
Two packets of sugar come with coffee. Two beggars: one child, teenager or woman paired with one baby, together two human beings doing the only thing they know to do. It also takes at least two men to have a fight.

Three people in a young family. A backwards facing baby is sandwiched between two frontwards facing parents on a motorbike. The kid is like a starfish, all limbs out. The mother holds one end of her dupatta between her teeth and sits on the other end.
Three rupees for a hot samosa in the train station, drowned in cilantro chutney.

Eleven rupees is the minimum fare to be paid for the shortest distance to be travelled in a rickshaw. If you give the driver ten, he won't say anything. But if you give him fifteen, he'll take his time in looking for change in hopes that you will just get out and go away.

Eighteen stops between Churchgate and Goregaon on the suburban train. 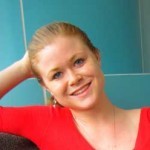