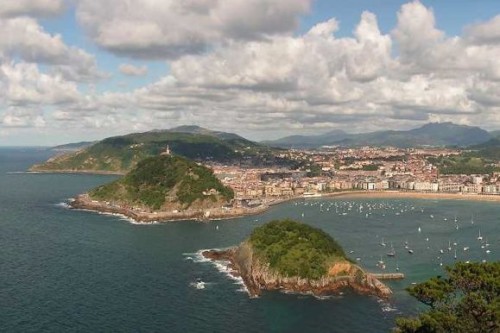 Pintxos, In Spain's Basque country, it's important to know a few words of the Basque language especially in the city ofÂ San SebastiÃ¡n. This hotbed of Basque nationalism is known as, Donostia,Â locally and there are other words that visitors should become acquainted.

In the Basque Country there are no tapas bars "“ instead they are referredÂ to as pintxosÂ bars, but the idea is the same. The Spanish eat a lot later than most tourists are usedÂ to and one of the reasons is that the locals visit a pintxosÂ bar first "“ so it's a great idea for visitors to eat a few pintxos too, to bridge the gap to the later eating time.

Â The problem in San SebastiÃ¡nÂ is eating just a 'few' pintxos "“ these bite-sized delights are so tasty and varied that some visitors, me included, can eat them all evening. Pintxos bars also serve wine and sherry, so if you do have a seat at the bar then there's no real need to move all night.

So it was at the A Fuego Negro in San Sebastian's old town "“ this is a famous pintxosÂ bar in the Casco Viejo, appearing in most guidebooks, and it always looks busy. As we approached along Calle de AgostaÂ at 9pm there were people standing around with small plates, wine, and/or a cigarette. There's no smoking inside and heading indoors the place looks packed but that's usually because people prefer to beÂ closer to the door in the warmer weather. At the back there is a small area with eight tables which always seem to be occupied.

However, it's more fun to be at the bar and luckily two places became available at the end near the kitchen and we sat down before anyone else could. We ordered two glasses of the house white wine and settled into the warm and welcoming atmosphere.

People were ordering food all around us and the five servers behind the bar were scurrying here and there, sometimes disappearing into the kitchen to place a larger order. Occasionally the female chef came out to query something and there'd be a bit of shouting until everything was sortedÂ out. Each time the kitchen door opened we were treated to a waft of whatever food was cooking at the time – squid, hake, cod, crab. Â

The Cuisine in Basque

The wine was really fresh and we decided that due to the din we'd just order three items at random from the blackboard rather thanÂ getting a Basque lesson in how to pronounce items such as spider crab (txangurro). My girlfriend can't eat dairy products so we did have a protracted discussion with a very patient proprietor to ensure that none of our order contained butter, including the bread. Â Â

Arriving on three separate, small dishes the pintxosÂ were delicious; delicately flavoured hake and cod with small amounts of lettuce, avocado, and carrot. All the time we were eating people were standing behind us but I never felt at all cramped even when transactions were taking place above my head and to either side "“ three euros for a pintxo, four for a glass of wine. We polished off our food helped by another glass of white wine "“ the heat from the kitchen was making us thirsty. I then decided to celebrate and ordered a manzanillaÂ sherry, never thinking they'd pour me a full glass. But they did and it was chilledÂ to perfection. I ordered two more pintxos and another sherry for us to share.

During our two hours at the bar the orders around us had never stopped coming and yet our server entered all our purchases into the till with 100% accuracy and we paid our bill quite happy in the knowledge that we'd had an experience we'd never forget. Â

Outside it was even busier than earlier and so we dodged through the crowds and found a quieter bar that sold ham pintxosÂ and the same white wine as we'd had before. The real joy of pintxos is that you can hop from bar to bar and sample each place's speciality knowing that it will taste wonderful.

There was still time to see the lights of San SebastianÂ reflected in the outgoing tide and watch some people partying on the city's central beach. We were able to reflectÂ that San Sebastian, and the Basque Country, are one of the great food destinations of the world and that visiting pintxos bars is the best way to appreciate this food. Â Â

Julian has written articles on Middle Eastern and European architecture for the US magazine Skipping Stones. He has written travel articles that were published in The Toronto Globe and Mail, Fate Magazine, National Catholic Register, and Northwest Travel. Julian has also written articles for the In The Know Traveler, Go Nomad, InTravelmag, and Go World Travel websites. He has also taken many photographs that have appeared in travel guides by National Geographic, Thomas Cook and The Rough Guides.