It began to drizzle when the toothless motorbike man asked to take me home. It was about midday and I had wondered around the city most of the morning finding my way to Reunification Palace, a white square building no more than 7 stories with a retro 1950's kind-of feel.

A child of the eighties I had a fascination with the Vietnam War, and I couldn't leave Saigon without finding the places that lit my mind in Hollywood grandeur. Really, it was everywhere. The American GI Zippos that sold at every corner, the dingy bars decorated with beautiful women, walls scarred by 40-year-old bullet wounds, and now on a park bench across from the Palace. 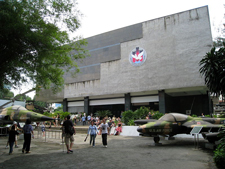 The grounds were closed that day so I sat in the park to imagine its strange history. Immediately, bullets began to whiz by my head. My hair was thrashed by the wind of propellers from the helicopters that continuously leapt from the palace roof. Ominous tanks leveled the park as frenzied shadows of people scattered about the square. (I mistook the palace for the embassy. A fact I would realize later.) It was a terrific scene that would have continued had the toothless older gentleman straddling a motorbike not broken my focus.

"I take you my home. I show you good time in bed," he said with a sheepish smile.

"No really. Thank you, but no." I was overly polite. It seemed I wouldn't have my moment, my movie in my mind, so I resolved to move on.

Later, still looking for the Vietnam War experience I headed to the War Remnants Museum. Once called the American and Chinese War Crimes Museum, it was a cluster of buildings housing exhibits filled with brutal photos and artifacts illustrating the ugliness of war, more specifically, US brutalities over the Vietnamese such as the use and affects of Agent Orange and napalm as weapons of war.

To tell you exactly what was displayed would sound overly sensational, but I can say it was there I learned, and not too subtly, the events that turned many US citizens against our own troops. I thought about those young men, some only 18 years old, sent to a mysterious land to fight a enemy they didn't understand for reasons they didn't know, and it felt so unfair. Then I thought about the famous photo of the young girl tragically wailing down a country road, naked, her clothes and skin burned off by napalm. It was all unfair.

Leaving the main room I found my way to a smaller area dedicated to the journalists and photographers who died reporting on the war. Walls were covered, like an art gallery, with countless photos of young journalist: American, Vietnamese, French, British, men and women. Each photo bared an epitaph stating something to the effect of "[John Smith] died a day after this photo was taken in a helicopter crash in the jungles of Cambodia." In this room the line felt blurred, the blame dropped and I stood silent in the middle of these photos, sets of keen eyes turned towards me, in awe.

Leaving the museum I noticed a solo traveler who had been going through the exhibits at the same time was exiting just behind me. I stopped in the sidewalk and turned around.

"How about a beer?" Considering what we just experienced beer felt like the better choice. We walked a block down to find a local bar, which was nothing more than a few folding tables and chairs in the shade of wide Coca Cola umbrellas. (I should note I am not this forward in my normal life.)

Sitting across from this stranger I began to feel guilty. Guilty for being an American, guilty for those ridiculous fantasies earlier in the day, guilty for feeding into Hollywood, for forgetting about the human cost, for picking up a cute guy, for the past war and the current war, for silently laughing at the man with no teeth, for not properly supporting the soldiers, for not properly protesting the war, for so many things. I stared down at my cold beer, as I felt all my sins growing red around me filling the space between the stranger and me. Suddenly it seemed he was my priest and I a young girl in confession.

"I have to tell you," I said with a pause, "I feel like the devil for being American."

"Hey, I'm German," he said with a shrug. We both laughed and with that we were freed of our nation's sins and were allowed to enjoy our penance of cheap beer.