You’re never too old to learn something new. Any traveler can tell you that. I learned this week that for a real baseball fan, attending a spring training game can be a more enjoyable experience than a regular season game.

The Cactus League, in Arizona, hosts spring training games for many major league teams every year, and has been doing so since 1946 when Cleveland Indians owner Bill Veeck moved his spring training operation to Arizona, from the traditional Florida Grapefruit League, in part, because the Indians had signed the American League’s first African American player, Larry Doby. Veeck felt Arizona’s racial climate at that time to be more hospitable. Veeck then convinced the New York Giants to move their spring training regime to Arizona that same year. The teams were joined by the Chicago Cubs, who moved to Mesa in 1951, and the Baltimore Orioles, who moved to Yuma in 1954, thus giving us the beginnings of the Cactus League. 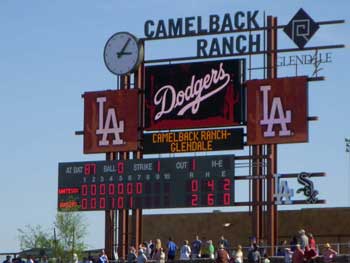 The league has grown over the years withstanding challenges from Florida’s Grapefruit League and now has a whopping 14 teams now calling Arizona their Spring home. The greater Phoenix area has 11 stadiums stretching west from Surprise, south to Tuscon and East to Mesa. Smack in the middle of this is Camelback Ranch Stadium, the newest park, home to one of the two 2009 newcomers to the league, the Los Angeles Dodgers. The Cleveland Indians are the other team starting play in the Cactus League this year, after a 16 year stint back in Florida’s Grapefruit League.

I visited the beautiful Camelback Ranch Stadium to see the first-ever game played there, appropriately enough between the two “home” teams, the Dodgers and White Sox. Growing up in Los Angeles, I have attended countless Dodger games at Dodger Stadium, so the first thing that struck me was how easy it was to get in the stadium here. The facility has only 10,000, but another 3,000 berm seats, or grass outfield seats, which is really just sitting on the grass. Honestly, those might be the best seats in the house. The grass is plush and the stadium has been designed to be fan friendly, so anywhere you sit, including on the grass beyond the fences, feels close and offers a great view from any seat.

The grounds around the facility are also unique and quite appealing. The whole design of the stadium, if you even want to call it that, is very desert-appropriate. The architects did a good job of not only making the experience advantageous for viewing a ballgame, but the stadium feels more like a park, where you might see a little league game than major league teams. Most fans enter through the center field entrance way after walking from the parking lots and in between the two teams practice facilities, which are seperated by a prominent two-acre lake which uses reclaimed water to not only offer an aestheticly pleasing walk, but also serves to irrigate the fields. The color tones throughout the stadium and the rock walls, called Gabion walls, constantly remind you that you are in the desert.

I enjoyed the atmosphere of Camelback Ranch Stadium so much I almost forgot I was there to see a game. But, see a game I did. And, believe me, unless you’ve got a corporate sponsor in your back pocket, you won’t get to see baseball like I did in Arizona. Seeing a game in the Cactus League, I was reminded of what makes baseball so great. Baseball is a pastoral game by today’s standards, which can be lost in the busy-ness of most 50,000 seat Major League stadiums. Not so in spring training. All of the stadiums are relatively small, the new Camelback Ranch Stadium being the biggest Cactus League stadium, so the fan gets to feel up close to the players, the coaches, even the umpires. The beer vendor and the first base ump had a friendly exchange over how much a beer would cost that ump, and I heard every word. Try hearing anything at a big stadium, other than the crazy drunk guy two rows back. The atmosphere was relaxed and I got the sense the fans were appreciated. The ushers were friendly, even the police presence was muted, which was definitely a far cry from Dodger Stadium. And don’t forget, since it’s Spring Training tickets are a fraction of the cost at a regular season game. Those great berm seats are only $8, just bring a blanket and make a picnic of it. I got great 3rd row seats, which felt more like I was in my neighborhood park than watching two Major League teams. And, it being spring, the players and coaches actually stop after the game and sign autographs, if you’re lucky. The whole scene seemed like something out of a Kevin Costner movie rather than today’s state of major sports.

If you live anywhere in the southwest United States, or close to Florida, or, heck, if you want to just travel and make a trip out of it, go ahead and spend some time at spring training. The Cactus League offers 14 teams playing within an hour or two of each other. Some share stadiums, so you can one on one day, and the other on the next. Just hop in a car and sometimes within minutes you can be at another team’s stadium. This just isn’t possible during the regular season.

For any true baseball fan, or sports fan, or just someone who wants pleasant, affordable and varied entertainment a visit to spring training in the Cactus League can’t be beat!

The Abbey of Mont St Michel