The Dragon of Tioman Island 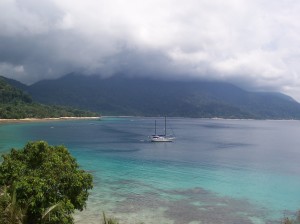 I only noticed the leathery old grandmother much later, when the general hubbub of a boatful of excited tourists had finally mellowed into a peaceful lull, and the munching mouths were silenced by sleep. It was then that I noticed her; a native Malay woman seated across the aisle cradling a boy no older than five. She was very old; a spidery web of wrinkles had spread across her face and her spine was bent, as though she was carrying the immense burden of her age, but her eyes, when they caught mine, twinkled brightly.

In her lap, her restless grandson munched noisily on a deep-fried prawn snack known amongst locals as kerepok. "Several versions of the legend exist," she said in a lisping voice to the distracted child (and, although she did not know it, to an attentive me) "but they all agree on these points: the protagonist is a nameless dragon princess. Her destination is Singapore, where someone awaits her arrival. Lover, sister, who knows. She takes off from China on wings of gold and flies across many lands and seas. Fatigued by her long journey, she stops awhile in the clear, cyan waters somewhere in the middle of the South China Sea. So enraptured is she by her impromptu pitstop that she decides never to leave. The dragon princess transforms into an island vowing to offer comfort to passing travellers just as comfort was offered to her. Thus was Tioman created."

As the boat chugged closer to our destination, I saw the twin peaks of dragon horns push out against the sky and noticed the green scales of giant trees and thick wilderness that form the landscape of Tioman. Simultaneously unapproachable and beautiful, cloaked in mist and penetrating the clouds "“ this, I thought, must be the Asian equivalent of Middle Earth’s Fangorn Forest.

Most of the island is uninhabitable but several kampungs or villages have sprouted up like wild, happy mushrooms as an answer to the growing popularity of the island amongst backpackers, beach bums, divers and Singaporeans on a weekend holiday. I had no desire to splurge on a resort or an air-conditioned room overlooking the sea at sunset. A clean fan-cooled hut was all I desired and all I had money for. According to my travel guide, Air Batang would be perfect for me.

One narrow cement road runs throughout the entire village of Air Batang, broken in intervals by bridges built over gaping holes in the ground, home to shy but impressive monitor lizards which scurry away as soon as they hear footsteps or the roar of an engine. Wooden chalets with thatched roofs, seafood restaurants, diving centers and the occasional bar are built on both sides of this path. Walking along it, one can see all there is to see in Air Batang. 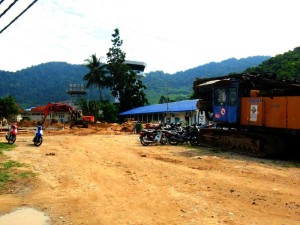 On an exceptionally warm morning, I followed this cement road to the south.Â  It ended at a rickety flight of steps leading up into a dense jungle. With a feeling Alice must have had before jumping down the rabbit hole, I plodded on. The jungle path was short, and soon gave way to a flight of stairs leading down to a scene so completely unfamiliar and new that it could have belonged to a modernized ghost town. Gone were the laid-back chalets, Â fecund greenery and mischievous kampung cats. This place was all gray concrete, with silent bulldozers parked next to mountains of granite and half-built brick buildings that in another couple of years will become resorts and chalets. In the far distance on a green signboard was a symbol of an upward arrow and the words ‘Kg. Tekek’.

That evening, as I nursed a beer at a strangely out-of-place reggae bar, I watched a sinking sun sprinkle a glittering blanket of orange and yellow diamonds over the sea. I thought about the old grandmother and the tale of the dragon princess and wondered whatever happened to the lover, sister, who knows, in Singapore. Probably another story waiting patiently to be told. 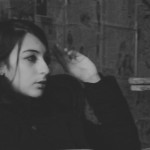 Preet Kaur likes es teh, short stories, South Asian literature and trains. Born and raised in Singapore, she has a background in literary fiction. You can read more about Preet and her published works at http://preetk.wordpress.com. 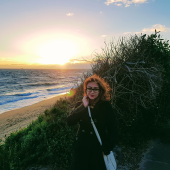 Preet Kaur likes es teh, short stories, South Asian literature and trains. Born and raised in Singapore, she has a background in literary fiction but travels often enough to write guides for GuideGecko. You can read more about Preet and her published works at http://preetk.wordpress.com.