The Happiest Place on Earth

Parking was $12. Admission for my daughter and I was $130. I suppose this would be a good beginning to a story about avoiding Disneyland, but it’s not.

We showed up with a backpack full of food, sunscreen, and more cash. A locker to put all this stuff costs another $10. My kid and I planned to stay from 8AM to 10PM — past her bedtime. We ended up staying a little longer. It would be easy to take a shot claiming that Disneyland just costs too darn much. After all, a family of five (three kids and two parents) costs around $320! That is a lot of money, but this is what I noticed as my daughter, who was perched on my shoulders, as the parade strolled by. Every costume sparkled. Not only that, but the performers were professional dancers and acrobats. The streets were clean and well organized for the parades. Everything worked. The fireworks and stage shows top-notch. We never waited more than 20 minutes for a ride (this might have been an off-day). I never needed to take more than a handful of steps to find an employee to answer one of my many questions. Later in the day I realized that I had never received attitude or bad service from anyone, ever. Sadly, I have had loads of lousy, unfriendly service at Starbucks, McDonald’s and about a third of of any restaurant or public attractions I have attended in the last year. I am used to it. 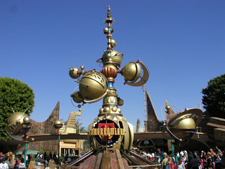 That’s when it dawned on me, visitors are paying for excellence. Disneyland is equivalent of a 5-star resort. Yes, for me to pay $200 for a day at the park is a luxury, but that’s why I continue to come once a year or so, for the luxury

At the end of a long day, my daughter passed-out in the back of my car in about thirty seconds as I entered the I-5 North to Los Angeles. I quickly did some more math. I paid about $13.50 and hour, which all of a sudden looked like a bargain. Yes, the happiest place on Earth.

Swimming with Sharks in Umkomaas