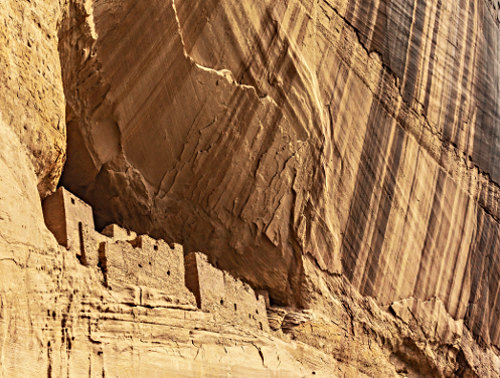 Exploring the History and Beauty of the Canyon

The last rays of the setting sun painted the canyon walls a deep orange as they turned the bottom of the clouds reddish. I was at Tsegi Overlook taking in one of the classic views of Canyon de Chelly. Tsegi (Say-ih) is the Navajo word for this canyon they call the spiritual and cultural center of their people. Native people have lived here for nearly 5000 years. The next day I would begin my exploration into this rocky fortress that has been the last stronghold of the Navajo. 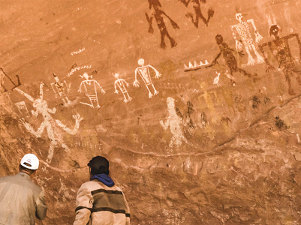 “The Frog Man indicates great drought while the snake symbol leads to water sources. White hand prints indicate where people are buried and mummified shadow hand prints show someone was cremated. The Kokopelli figure is the rain dancer.” This was how some of the numerous petroglyphs were described by Navajo guide and storyteller Adam Teller of the Coyote Clan.

We were in Canyon del Muerto (Canyon of Death). The reddish orange Navajo sandstone walls soar 800 feet above the sandy canyon floor. Ancient ruins sit under rocky roofs along the sheer walls in places called Junction Ruins, Mummy Cave, Ledge ruins and Massacre Cave. It is one of two main Canyons and several smaller box canyons that make up the Canyon de Chelly National Monument. It is the only National Monument that still allow Native American to live and have property within its boundaries. The Navajo have been here for hundreds of years. Cliff dwellings of the Ancestral Puebloan People (formerly called the Anasazi) date back even further.

I had been to Canyon de Chelly before to photograph the famous Spider Rock and White House Overlook. I wanted to get a more in-depth appreciation of the history, culture, and beauty of this unique place so I joined an Arizona Highways PhotoScape tour that hired Navajo Photographer Leroy DeJolie and Adam’s family to drive us about the canyon and teach about its meaning to his Adam’s family and the Din, as the Navajo call themselves. It means ‘the people’. 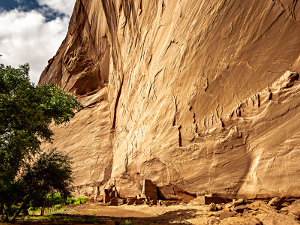 Our stop at the Teller family property called Antelope House for a lunch of Navajo flatbread and soup cooked by Adam’s sister allowed me sit and view the nearby ruins. It felt like I was having my meal with the ancient ones. Antelope House is the site of one of the best ancient dwellings that sit on the canyon floor and can be approached much closer than the high cliff houses. The haunting notes of a flute player nearby made the experience of visiting these ruins more spiritual that just viewing the canyon from the viewpoints.

I climbed back into our Jeep driven by Adam’s eighty-year-old father, Ben, to continue our tour. Ben lived in the canyon for many years and knows it well. The gears would grind as Ben drove through the sandy washes and steam beds lined with cottonwoods turning golden in the fall weather. High above I could see a huge rock mesa.

The Navajo Fortress is where 300 Navajos hid from Kit Carson’s soldiers in 1864 and avoided the infamous Long Walk where 4000 Navajos were moved to New Mexico. Adam told how his people used wooded poles with notches in them as ladders to climb the narrow rock cracks to scale the 700 feet to the top. They collected rain water from depressions in the rock or by dropping a gourd on a long rope into the stream below. Adam’s grandfather is credited with naming it because he carved the name ‘Navajo’ in the rocky walls of the fortress at least according to the Coyote Clan stories. Leroy DeJolie explained how Fortress Rock and the whole Canyon de Chelly is a symbol to the Navajo that they can survive anything. It carries spiritual meaning to all Navajos even those who reside in other parts of the reservation. It is to them, I guess, like Ground Zero or Pearl Harbor. A place to be honored and protected. 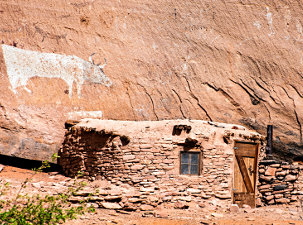 Amazing wall art met my eyes at Newspaper Rock. Where the figures are so dense it is like the print on a newspaper. Adam pointed out the drawings of Spanish conquistadors on the canyon wall at another site. These depict the invaders from Santa Fe who came in 1805 to conquer the canyon. One has a cross on the front of his serape probably depicting a Catholic padre. Standing Cow ruins is a place where an old stone cabin sits beneath a white cow and several Kokopelli drawings. These are more recent with cow being painted in 1932.

Mummy Cave sits much further down the canyon and is one of the best-preserved cliff dwellings in the monument. Nearby is Massacre Cave being where Navajo women and children were killed by the Spanish in 1805. The Navajo call it ‘Where Two Fell Off’ as legend has it that a Spanish soldier who climbed up to the cave was grabbed by a Navajo woman and both fell to the deaths on the canyon floor. The variety of historical, cultural and scenic locations in Canyon del Muerto made me anxious for my exploration with Ben and Adam of the monument’s namesake, Canyon de Chelly.

The sun was climbing into a clear blue sky as we four wheeled our way into Canyon de Chelly. First Ruins passed by and Ben said on the way back we would call it last ruins and smiled at his own joke. The sun silhouetted the cottonwoods as we drove past a mare nursing her foal. The leaves had changed to a golden yellow on many creating a warm glow as we drove beneath them. We stopped to admire Kokopelli Cave that had numerous petroglyphs and I recognized many from Adam’s previous descriptions. More drawings presented themselves at Scorpion rock where horse riders are depicted chasing a deer. Adam told the story of how medicine men would throw corn pollen into the face of the deer. The deer would breathe it in and die. This allowed the buckskin to taken without any holes and cured for a ceremony. I watched as a safari vehicle pulled up to the rock, so the tourists could take pictures. It was a visual contrast between the past and the present. 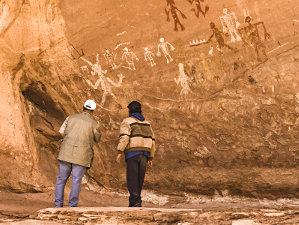 The best rock art in the canyon is located on private land but Adam was able to get us special permission to visit Spring Canyon. Spring is a long box canyon where one of the famous scenes from the Lone Ranger movie with Johnny Depp was filmed. It is near the Sliding House Overlook but across the canyon from it. The numerous figures on the cave wall were more ominous than other sites with stick figures wearing horns to represent Shaman, medicine men, or dark red figures to represent the ancient ones and others that looked like evil spirits. The diversity of rock art and petroglyphs in this monument are some of the best in the southwest. They mean so much more when described to you by a descendant of the people who made them. Adam told me that the Dina believe recent DNA analysis prove his people had Anasazi ancestors.

The jeep plowed thru the deep sand and over the ruts made by previous tires to visit the most famous ruins in the canyon, The White House. Ansel Adams made these ruins famous with his photographs and I tried to emulate him with my own interpretation. The White House site has ruins both on the canyon floor and 100 feet above on a shelf in the massive canyon wall. This wall is covered in lines of black, red, white, and grey created by the summer rains spilling down the wall to create this patina called ‘canyon varnish’. The ruins get their name from the whitewash used to reflect the sun from the houses. My visit to the canyon floor ended with Ben driving us past Dog rock and then as he called them ‘last’ ruins. We all smiled. I visited the most famous overlook in the monument that evening to gaze at another rock with a legend, Spider Rock. 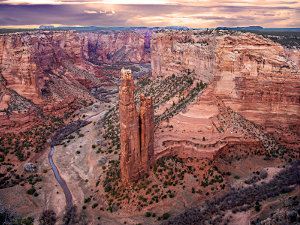 A twin pinnacle of Navajo sandstone soars 800 feet in solitude at the eastern end of Canyon de Chelly. Spider Rock guards a confluence of canyons with a small stream flowing past its foundation. Once the sun disappears behind the canyon rim the rock walls glow from the reflected light off the clouds above them. Navajos believe Spider Woman taught them how to weave their famous Navajo blankets which is like a spider weaving its intricate web. “Grandma used to warn me when I was being mischievous,” Adam Teller related. “She’d say, ‘Spider Woman is going to come and get you. She boils and eats bad little kids. Look up there see those white banded streaks on top? Those are the bones of disobedient children, bleaching the rocks.”

Visitors can travel the rim drives and view many of the major attractions of the canyon. Visitors are only allowed to hike to the canyon floor from the White House Overlook down a steep trail to the ruins. All other visitors to the canyon floor must be accompanied by a Navajo guide. A four-wheel drive vehicle is necessary. Permission is needed to go onto fenced land so make sure to discuss what you wish to see with your guide, so they can get the right authorizations.

I recommend Adam Teller at Antelope House Tours at www.canyondechelly.net/.

Photographers should contact Arizona Highways PhotosScapes. This not for profit group gives good value and excellent guides who will make your Southwest experience outstanding. They often offer workshops twice a year to Canyon de Chelly. Check them out at https://ahps.org/.

The stories and legends of the caves, ruins, mesas and pinnacles make Canyon de Chelly more than just a scenic place. It is a living breathing time capsule that is brought to life by the people who still live within its towering rock walls. The land is part of them and they would live nowhere else. It is and continues to be a place the Dina revere and consider their last stronghold.