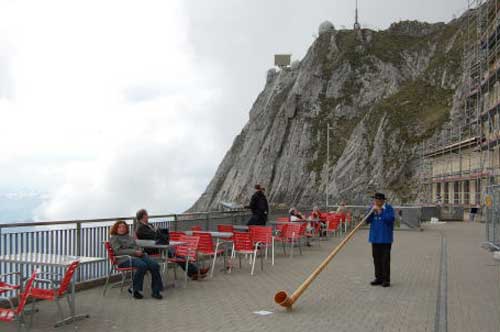 The Richard Wagner Museum is perched near exquisite Lake Lucerne (Luzern in Swiss German), surrounded by dramatic vistas of the Swiss Alps. The three-storey mansion where the German composer lived from 1866 to 1872 now documents and celebrates Wagner's music and life in Switzerland.

The manor — originally built in the 15th century, its current design dating to 1800 — owned by Lt. Col. Walter Am Rhyn, when Wagner stumbled upon it at Tribschen, while sailing across fabled Lake Lucerne in 1866. Today, visitors can take the boat RÃ¼tli from Bahnhofquai (the dock near Lucerne's main train station) April through October to this cultural repository of things Wagner. Or ride the number 6, 7 or 8 bus from Lucerne's Bahnhof six stops, less than two miles south of the splendid city center, to the Wartegg stop. From there, follow street signs, walk almost 10 minutes towards Lake Lucerne and then up an incline to the sole house at the shady, green enclave called Tribschen. At the grounds' entrance is the outdoor SommercafÃ©, offering superb lake and Alpine views plus espresso, wine, beer, cake, panini and salad to patrons shielded by white umbrellas from the Swiss sun, snow or rain.

On the cafÃ©'s right hand side a larger than life stone bust of a determined looking, mutton-chopped Wagner is mounted on a pedestal. The expressive sculpture by Thomas Hunziker was commissioned to observe the 50th anniversary of the Schweizerische-Richard-Wagner-Gesellschaft (the Swiss Richard Wagner Society) and unveiled in 2006.

Immediately inside the house Society board member, musicologist and museum curator Katja Fleischer sits in an office where souvenirs (Wagner CDs, books and the like) and tickets (8 Swiss Francs or about $6 per person) are sold. Stirring Wagnerian horn music, Siegfried's Funeral March from Gotterdammerung, plays as guests enter the inner sanctum where Wagnerana is mounted on walls or ensconced in glass cases around the five-room first floor. Numerous oil and photo portraits depict the usually stern looking composer; in one black and white print a youthful Wagner almost smiles. It's interesting to contrast these formal, posed pictures with photos of rock stars and other glitterati by today's snap-arazzi. 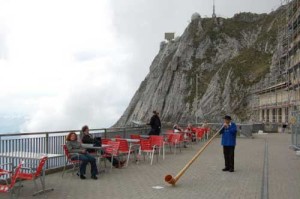 The imagery includes fanciful paintings portraying gods, giants, dwarves, warriors and Valkyries from various Wagner works at their mythic settings. There is a triptych of The Ring's legends, as well as Black Forest-born symbolist painter Hans Thoma's four aquarelles and pastels visualizing Nibelungen characters, such as the Rhine maidens, Brunnhilde and Siegfried. (Wagner and then-future wife Cosima named their son after this heroic swordsman when he was born in Tribschen in 1869, the same year The Rheingold, The Ring Cycle's first part, premiered at Munich. In 1896 Thoma sketched costumes for the 1896 Bayreuth Festival's Ring production.) There are also photos of 19th century sopranos, tenors, etc., who incarnated various Wagner dramatis personae onstage.

Other Wagnerian ephemera include books, berets, hats, slippers, garments, etc., worn by the maestro. The death masks of not only Wagner, but of philosopher Friedrich Nietzsche, a frequent Tribschen houseguest, are displayed. Like Wagner, Nietzsche was a European exile living in neutral Switzerland whose work was later misappropriated and exploited by the Third Reich for propagandistic purposes. Another cast features the plaster cast of the hand of Wagner, also a conductor and pianist.

The permanent collection appropriately includes manuscripts of books he wrote, composition books, librettos, scores and sheet music, plus musical instruments, notably Wagner's Erard grand piano from Paris, which the museum's website calls its "gem." A tuba and Swiss alpenhorn are also exhibited, the latter suggesting Leipzig-born Wagner's affection for his adopted homeland, where he lived for around 16 years after fleeing Germany because of his participation in Dresden's 1849 May Revolution. Although Wagner was then the Royal Saxon Court Conductor, he passionately supported the democratic revolution against the monarchists, hobnobbed with anarchist Mikhail Bakunin, and was wanted when he escaped to Switzerland. Ironicically, Wagner — a virulent anti-Semite whom the Nazis adopted as their musical poster boy long after his 1883 death — was part of the revolutionary upsurge that likewise forced his countrymen and Communist Manifesto co-authors, Karl Marx and Friedrich Engels, into exile.

Wagner so loved Switzerland that he used the alpenhorn, a traditional Swiss folk instrument, in Tristan and Isolde, incorporating a melody he'd heard played on the long wooden open pipe instrument at Mt. Rigi in order to conjure up a herdsmen's dance. A confirmed Alpenist, Wagner traveled around the mountainous nation ascending the Alps, especially in the central region, where Lucerne is located. Two of his favorite mountains are visible from Tribschen: Famed Mt. Pilatus towers behind the mansion. In the distance Mt. Rigi looms across Lake Lucerne. 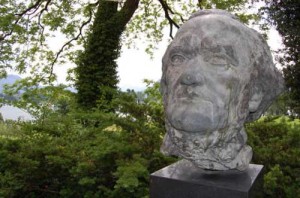 On the shrine's second floor its current special exhibit through November 30 (when the museum closes until March), "Alpine Myth in the 19th Century: Richard Wagner Walks in Switzerland," honors the master's "fascination with high mountains," where he could imagine his legendary Nordic characters and creatures carrying out their derring-do at dreamy, far off Valhallas. The exhibition includes a big wall map noting all the places where Wagner traveled in Switzerland, plus a battered leather trunk, icepick and boots, typical gear used by 19th century mountain climbers.

From 2009-2010 L.A. Opera presented Wagner's Ring Cycle, and last October, when I reviewed Siegfried, the third installment of Die Nibelungen, I observed that Wagnerian music sonorously streamed through my psyche's symphony while hiking in the Alps above St. Moritz. The "Alpine Myth" show confirms that the snowy Swiss summits indeed profoundly influenced Wagner.

The museum's second floor also has a video/DVD and CD room, while its third floor is roped off to the public. Back downstairs, I chatted with curator Katja Fleischer, a young German woman who'd studied at Wagner's birthplace, Leipzig. Fleischer said she was "a musicologist, not a musician," and that "Wagner is my favorite composer. It's important "“ I work here… for eight years." Her favorite work by the maestro is Tristan and Isolde; in 1859 Wagner completed its score while living at Hotel Schweizerhof, which still stands lakeside at Lucerne. Fleischer added that the museum doesn't carry English language books "“ such as Cosima Wagner: The Lady of Bayreuth by Oliver Hilmes and Stewart Spencer, a new, reportedly tabloidy biography about Franz Liszt's illegitimate daughter "“ "because they're too expensive."

The same year Wagner married Cosima at Lucerne's St. Matthew's Church he composed Siegfried's Idyll, premiering it on his Tribschen home's steps as a birthday present he awakened his new wife with in 1870. In 1938, Arturo Toscanini "“ who spurned the Wagner-originated Bayreuth Festival then held in Nazi Germany "“ conducted Siegfried's Idyll at Tribschen. Broadcast live in America by NBC, the Lucerne Festival was born. This year, the major musicfest takes place Aug. 12 through Sept. 18 at the acoustically perfect KKL (Kultur und Kongresszentrum Luzern, or Culture and Convention Center Lucerne), and includes Tristan und Isolde, conducted by Esa-Pekka Salonen, staged by Peter Sellars.

In addition to boat, bus and car, there's another way to visit the museum from Lucerne Wagner the Alpenist would've approved: Walking. I returned to the so-called "City of Lights" on foot, first strolling by the lakeside, where a bikini-ed Brunnhilde swam, continuing through a forest near Tribschen and then hiking mostly along Lake Lucerne. In about 30 minutes I reached KKL, with its distinctive roof stretching towards the water, where boats transport tourists and commuters to the Alpine ring clasping the city of 60,000. Just beyond KKL the famed KapellbrÃ¼cke "“ a medieval wooden covered bridge with its water tower and centuries' old paintings "“ spans the River Reuss, linking the Old Town, and which, like Brunnhilde, survived fire. A fitting symbol for the idyllic city Wagner loved and found refuge in 150 years ago.

Paris on a Budget