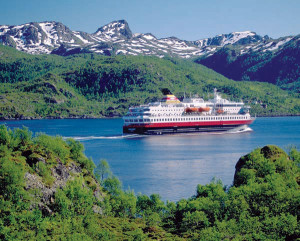 TromsÃ¸, May 2013 "“ This summer, Hurtigruten invites its guests to join its 120th anniversary celebrations taking place on July 2. In all thoseÂ­ decades of sailing the idyllic Norwegian west coast, with its many scenic fjords, charming villages and modern cities, Hurtigruten has garnered numerous recognitions, including being named "the world's most beautiful voyage" by Lonely Planet. The 12-day anniversary sailings, departing daily from June 21 to July 1, feature a special itinerary that includes the introduction of Lyngenfjord, a new highlight for Hurtigruten guests, as well as a cultural mix of music, history and culinary delights on board, and different celebrations in many ports along the route.

Guests will gain a deeper understanding of how Norwegian culture and the company's fascinating history, along with that of its founder Richard With, are intertwined. July 2, the actual anniversary and the date when the celebrations reach their pinnacle, is greeted with a traditional Norwegian birthday celebration of coffee, cake and musical entertainment. These roundtrip voyages from Bergen to Kirkenes and back are specially priced from $2,902 to $3,622 per person, double, a savings of $2,139.

For the first time in its 120-year history, Hurtigruten will sail into Lyngenfjord on the southbound portion of these anniversary voyages. Located between SkjervÃ¸y and TromsÃ¸, this fjord is flanked by the mighty Lyngen Alps and stretches approximately 52 miles. Guests can take in the bubbling waterfalls, green banks, glaciers and canyons from Hurtigruten's sun decks and expansive panorama lounges. As part of their visit to this new region, guests also get to meet local fishermen, who come on board and offer tastings of their daily catch.

Many of the ports are participating in the celebration. In the UNESCO-listed Geirangerfjord, guests can enjoy a performance by 19-year-old Ingvild SÃ¦tra, a folk musician and fiddle-player who has received numerous awards for her musical prowess. A local duo named Sounds of Nature (aka SON) greets guests in TromsÃ¸ with a mix of jazz, blues, electronic and traditional folk music. Further north, entertainment is offered up by the BerlevÃ¥g male voice choir that was made famous after being featured on a Norwegian TV documentary called Heftig og Begeistret (Cool & Crazy); they join the ship quayside to perform as proud representatives of Norway's choral societies and singers. On the culinary side, Hurtigruten's chefs drew inspiration from 1893 as they developed a special dinner menu for these anniversary voyages.

Proudly transporting both freight and passengers for 120 years, Hurtigruten is a world leader in expedition voyages, sailing to such remote destinations as Antarctica, Greenland and the Arctic's Spitsbergen, as well as year round along Norway’s coast and Europe in the spring and fall. The company's fleet of 12 intimate ships, which each carry 100 to 646 guests, allows travelers to enjoy the scenery and culture of the destination in a relaxed atmosphere.