“I Am Pride” at West Pride festival 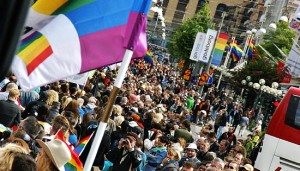 West Pride is a cultural city festival for everyone "“ a place where everyone has the right to be themselves. And be proud of it.

Between May 20 and June 2 Gothenburg will be adorned with the rainbow flag. This year’s campaign message is "I am pride". The message is based on visitor participation to show their pride and thus become part of the festival.

The festival is highlighting the standard criticism and LGBT persons' lives in an artistic and cultural context. The intention is to visualise a diversity of expression by coordinating and organising art and culture of the highest quality. But also to create meeting places and arenas for knowledge recess, conversation and reflection. Through art and culture, we encourage an open and tolerant social climate in Gothenburg and western Sweden. A climate that counteracts prejudice and discrimination based on sexual orientation and gender identity.

I Am Pride festival Calendar