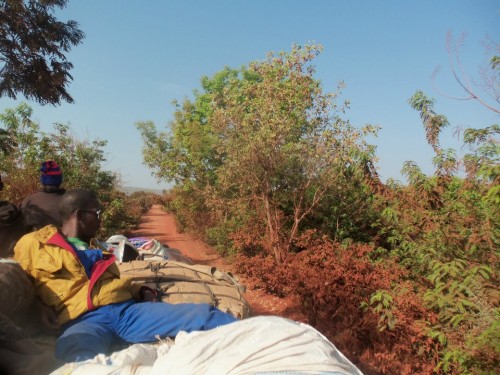 Life in Guinea Without Money

Upon arrival in Guinea’s capital city Conakry, my truck friend Jalou took me to his family
home. It wasn’t so dismal; they had walls, a couch in their living room, beds in their bedrooms. We went out to meet a friend of his and passed the local market. A large, steaming rubbish tip sat beside it whilst the flavourful smoke mixed with the people and produce. Fishes gathered flies as they lay waiting to be sold on the uncleaned mats on the floor, sharing the same space as fruit and vegetables which were fingered by the owners' hands which had been licked clean after eating a plate of rice and sauce prepared in somewhat unsanitary conditions. Piles of used clothes were thrown around by searching customers landing on the sandy ground or on neighbouring food stalls. People walked or jumped across stalls in the shoes they had walked across city grounds and garbage in. There really was no order. But how can there be order when there is no money to support it? These were normal people trying to make a living with the little produce they had; they couldn’t afford to set up a shop or even make a stall off the ground. All they have is the mat they brought from home which the kids probably sleep on. Besides, all this lack of cleanliness would only affect a weak Westerner like me – Africans like this are born with stronger stomachs which become even stronger with age.

I bought a bag of water (drinking water comes in bags here, not bottles) for both me and Jalou as we sat waiting for his friend to finish work. Some kids close by were staring silently at me. I said ‘Bonjour’, waved and smiled, but they continued to stare. Then it clicked in my head that they were thirsty. I extended my arm towards them and it took less than one second for them to grab the water bag. ‘Merci!’ they shouted as they shared it between the three of them.

Later, I saw a woman with sheets of material for sale and, interested in buying some, I
asked her how much they cost. French numbers confuse me sometimes, especially anything past thirty-something… plus this had a thousand at the end (one thousand Guinean Franc is approximately one euro), so I asked her to write it down on a small piece of paper I had. When she finished I stared down at the shaky scribbles on the paper. This wasn’t just bad handwriting; she actually couldn’t write.

Another instance of meeting completely unschooled people was later on in my time in Guinea when I asked for a number of oranges, for example. Because of my bad French accent, I would hold up three fingers to assure understanding. More often than not I would be met with a confused expression, then given the wrong number of oranges. It took some thinking, but I finally realised that three fingers means nothing to these people; if you have had no schooling then you can’t necessarily count. How can you count three fingers to know that means three oranges? 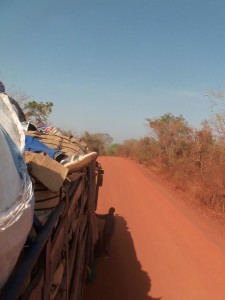 The Effects of Poverty

Back at Jalou’s place, in the evening I was introduced to his family who had just returned from work and school. They were all very excited to have a white person staying in their house. One of his younger sisters was disabled; she couldn’t speak, she couldn’t understand everything her family was saying to her, and she had saliva dribbling down her chin soaking her chest and t-shirt. Jalou and the rest of the family treated her so well, giving her attention and always hugging and holding her. They told me that there is a special hospital in Paris which could help her, but they couldn’t afford to send her. She started to dance in front of me with a huge smile on her face. For the first time on my trip through Africa, tears filled my eyes and the lump in my throat was unbearable. I knew that they will probably live their entire lives in hope of sending her to Europe, without it ever materialising.

Conakry is for sure the poorest place I’ve ever been to, the combination of the squalor of the marketplace to the complete lack of education for the poor. It’s so shocking to see that it even puts me, the most stupidly idealistic, positive person in the world, in a pessimistic state of mind. How could this ever change? It seems impossible. I began to forget what the West is really like after that. Look around you… what do you have? Poverty and the imbalance of wealth in the world is just incredible. 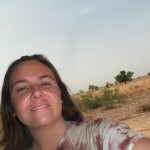 Kimmie Taylor has been a traveller since 18 and a true vagabond since 21. She is currently hitchhiking alone through West Africa and feels it is so important to spread the message of how wonderful the continent is. People mistakenly call her “brave” when all it is, in fact, is a faith in humanity and a great love for the world. You can visit her blog at http://kimmieslife28.blogspot.com/

Obernai Fetes the Arrival of Autumn