It isn't everyone's idea of a great way to spend the weekend. Definitely not for the city bred, disco and mall addicted youth. A day's exploration of one of the longest underground cave systems in the sub-continent, can put off even the most adventurous city dweller. Cold, clammy caves, deep under the earth's surface, infested by bats and other nasty creatures of the night. Yes, all that, but there's also a touch of adventure and the thrill of doing something different and exploring a new region. So, after a few arguments and counter-arguments, I decided to hit the road and visit Belum caves in Andhra Pradesh "” India's second longest underground cave system after the 21.5 km long Krem Um Lawan cave in Meghalaya. 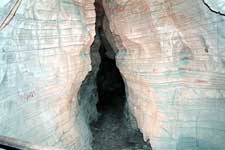 I started off in a private 15-seater air-conditioned bus from Bangalore on a Friday morning. The bus raced along the highway through towns like Devanahalli, the proposed site for the Bangalore international airport.

Then came Chikkaballapur and the border town Penukonda.

Amazingly, I felt the weather change perceptibly as I approached the border that separates cool Karnataka from sultry Andhra Pradesh. The weather progressively became hotter after Penukonda. The roads were wider and smoother, but I was perspiring inside the supposedly air-conditioned bus. The dry and deserted landscape made me feel as if I was on another planet and it was a great relief to see an occasional patch of grass.

Soon I arrived at Lepakshi and stopped to do a spot of temple tourism. The sprawling Veerabhadra temple, on a small hillock, has some of the best murals and stone sculptures of the Vijayanagar era. I took in the intricately carved monolithic idols of Ganesha and Shiva Linga inside the temple. The 30-foot- tall Nandi statue nearby is another impressive sight.

From Lepakshi, I proceeded towards Belum and reached there in the late afternoon. Located in a limestone area in the Kolimigundla village, in the Kurnool district, Andhra Pradesh, the 3.5 km long Belum Caves gets its name from the Sanskrit word Bilum (meaning 'cave').

These underground caves, located amidst flat agricultural land, have three well-like cavities/sinkholes, of which the central one has been converted into the main entrance with a neat flight of steps for people to enter. 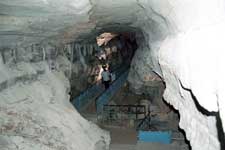 After buying the tickets, a group of visitors lined up in front of the cave's main entrance. Our guide, Srikanth took me and the rest of our group down a concrete staircase into a sinkhole, about 30 feet below ground level. If the outside was hot, inside it was like a furnace, despite the fresh air coming from blowers installed by the Andhra Pradesh Tourism Development Corporation (APTDC).

But I quickly forgot about the heat and found myself admiring the caves and its natural formations. The well-lit and neatly maintained passages have fountains with strategically placed lighting, which gives the natural formations an eerie glow and makes walking through the vast subterranean passages an exciting experience.

There were stretches in the cave where I had to crawl, squeeze, push, shove and ease myself gingerly through some of the really narrow passages.

As I got lower, the beautiful stalactite and stalagmite formations awed me to no end. The stalactites hang from the ceiling of the cave like icicles while the stalagmites are found in myriad formations on the cave floors. Our guide, who kept up an unceasing patter, explained that some of these formations were over 4,000 years old.

In my opinion, APTDC has done a wonderful job in restoring the caves and opening them to the public. The well-planned illumination rids the caves of its claustrophobic feel and creates a brightness that enhances their splendour.

What's more, the state government has declared the entire area protected and banned all construction in the precincts of the cave system "“ a worthy preservation effort, which urgently needs to be emulated elsewhere in the country. 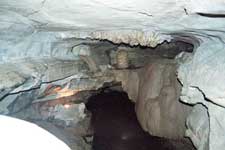 The silence inside the cave was unbroken except for the quiet gurgle of water in some passages. As Srikanth took us through the caves, he explained that although a length of 3.5 km has been successfully explored, only 1.5 km is open to tourists. After taking us through a maze of spacious chambers, passages, fresh water galleries and siphons, Srikanth led us through the Simhadwaram (a natural arch-like formation where the stalactites look like the head of a lion) into a narrow passage that leads into a large chamber known as the Kotilingam.

From here, I followed a descending passage to Patalaganga, the deepest point of the cave system and the last point of the tour. There is a perennial spring of water flowing from south-east to north-west, disappearing into the earth. Above this is a stalagmite resembling a shiva lingam, a symbol representing worsip of the Hindu god, Shiva.

Using a different route to climb, I enjoyed making music at the Saptasvarala Guha (musical chamber). The unique feature here is the metallic sounds the stalactites make when hit with a wooden stick or one's knuckles.

The Belum Caves were originally discovered in 1884 by a European surveyor Robert Bruce Foote.

Later between 1982-84, a team of German speleologists [the scientific study of caves] headed by H Daniel Gebauer conducted a detailed exploration of the caves.

In 1988, the state government decided that the caves were of archaeological and geological importance and declared them protected. Later, APTDC developed the caves as a tourist attraction in February 2002.

FACT FILE
Belum caves are open on all days from 10 am to 5 pm. Visitors are not allowed to venture into the caves on their own. There are many guides who take groups of 10 to 15 at a time for a guided tour of the caves. Entry Fee: Rs 25 per person.
*Getting there:

Belum caves are located in Kolimigundla Mandal (Kolimigundla village) of Kurnool district, Andhra Pradesh ,about 270 km from Bangalore and 320 km from Hyderabad.

Frequent buses connect Kurnool with Bangalore, Chennai, Hyderabad and other major cities in the southern part of India.

Train: The nearest railway station is at Kurnool town well connected with Bangalore, Hyderabad and Chennai.

Accommodation:The APTDC maintains a small 32-bed dormitory (Rs 40 per person per night). A canteen, curio shop and a restaurant have also been promoted by APTDC.

Cofresi: Tranquility in the Dominican Republic 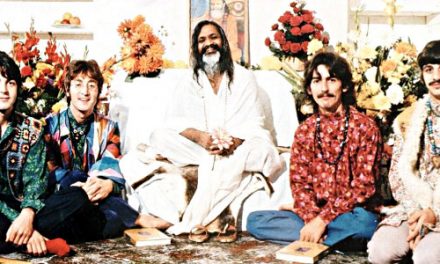